The writer is Research Fellow at the Institute of Development Studies, UK 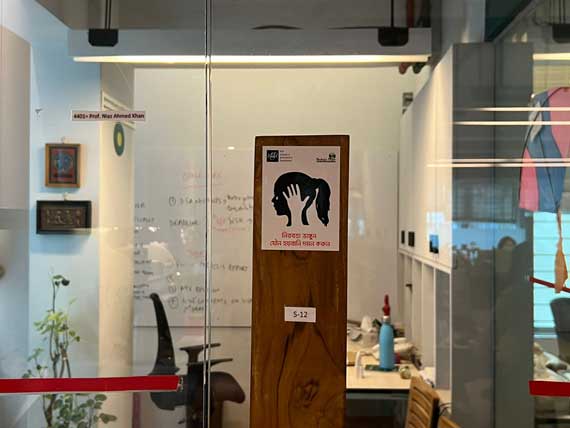 A poster displayed in an office in Dhaka, Bangladesh asks people to “smash the silence and put an end to harassment.” Credit: BRAC Institute of Governance and Development

BRIGHTON, UK, Jun 28 2022 (IPS) - What does empowerment for young women look like? For many, the answer would include jobs. But the belief that jobs bring empowerment through income, greater autonomy, and bargaining power within the family fail to recognise that these potential gains for young women are undermined by widespread sexual harassment.

Our new research on workplace sexual harassment, with women in Uganda and Bangladesh, reveals that young women lack both protection and security at work and have little power themselves to challenge the sexual harassment they experience.

After interviews and group discussions with over 100 young female factory and domestic workers, their experiences of sexual harassment – and the extent of it – became clear, as well as the factors that constrain them from reporting it to authorities.

All the young women we spoke to had experienced sexual harassment at work. Verbal abuse, comments and ‘bad looks’ were most common and almost accepted as part of everyday life at work. Inappropriate touching and groping also frequently occurred.

Young and unmarried women from poor backgrounds are particularly at risk. Due to their isolated working conditions, domestic workers are even more likely to be exposed to the most severe forms of sexual harassment, including assault and rape. We also found that they were more vulnerable due to starker class differences and their limited education.

This research from the Institute of Development Studies and our research partners shows that most young women find the best possible strategy is to change their own behaviour to avoid physical forms of sexual harassment from happening. The tactics range from avoiding lone working to wearing baggy clothes to avoid attracting attention.

One Bangladeshi factory worker said she avoided the parts of the factory floor where fans might flutter her dress and reveal her skin. Domestic workers in Uganda preferred to do chores outside the house if a male employer was home alone.

During our research we collaborated with linguists to analyse how language and gender norms influence the young women’s voice and agency in response to workplace sexual harassment. We found that existing social and gender norms are normalising the sexually aggressive behaviours from male co-workers, supervisors and managers and often leads to the young women being blamed for attracting attention from other men.

Gender norms also influence women’s voice and agency. Social norms around purity and honour in Bangladesh, for instance, restricted women’s freedom to speak about their bodies and attention they get from men.

In Uganda, norms concerning marriage prevented domestic workers from taking action as they were afraid to ‘disturb’ the marriage of their employers. Language is essential for voicing and challenging sexual harassment, but we found that social and gender norms prevent young women from articulating the transgressive and inappropriate behaviour by men.

Many women hide detail, deliberately use euphemisms, and even lack the vocabulary to explain what happened to them, ultimately limiting opportunities for reporting and for any redress.

Given these major barriers to speaking out about sexual harassment, it is not surprising that few young women take further action or report incidents. Most young women we spoke to will tell someone about an incident but mainly for moral support rather than to take action against the perpetrator.

Women felt that the police and authorities are unwilling to respond.

Local authorities are often men who often dismiss their cases, blame the women, or telling them to be ‘forgiving’. Young women and their families also distrust the police. Anticipating the need to pay the police informal fees and bribes to file a case, most women will just not report cases to them.

Hence, young women who have the courage to take further action mainly needed to rely on family members to settle matters informally with employers. Even when reporting to employers, sexual harassment is more usually ‘resolved’ informally, with perpetrators hardly facing any consequences.

This means that any strategy for tackling sexual harassment in the world of work must not only target employers but also government authorities like the police.

These findings ultimately challenge the existing idea that formal jobs will offer ‘decent work’ and empower young women. Food processing factories (where many of the women we interviewed worked) can drive economic growth and promote job creation for large numbers of unskilled workers.

Yet, while the factories are formal, most jobs are informal and precarious: workers lack contracts and security, earn little and are paid infrequently.

In Uganda, measures by factory employers to tackle sexual harassment were found to be entirely dysfunctional and did not adequately protect or support women.

In both Uganda and Bangladesh, the indirect protection offered to women from working in groups was what protected them to some extent, not policies.

For many international aid donors and governments promoting ‘decent jobs for youth’ is a key development priority. But their focus is firmly on skills, decent wages and job security with workplace sexual harassment often left overlooked.

Even where youth employment interventions target businesses and employers directly, opportunities for improving workplace policies and safeguarding are missed.

What we need now are laws, mechanisms and a change in culture and attitudes to reduce workplace sexual harassment of women. This includes offering support to firms to design and implement sexual harassment policies and safe complaint mechanisms, encouraging female leadership, and women workers committees and female representation in the workplace at all levels.

This is particularly important in sectors likely to generate jobs.

Employment can generate empowerment for women but while widespread sexual harassment exists, this opportunity for empowerment is being undermined in many countries.

We urgently need governments, employers, and communities to provide the supportive environment that young female workers need, and we must shift the focus from the quantity of jobs to the quality and safety of jobs.