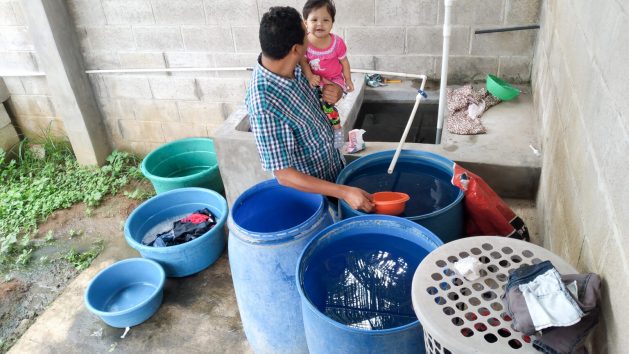 Alex Leiva, holding his baby girl, uses the water he managed to collect in barrels at 4:00 a.m., the only time the service is provided in Lotificación Praderas, in the canton of Cabañas, on the outskirts of the municipality of Apopa, north of the Salvadoran capital. The families of this region are fighting in defense of water, against an urban development project for wealthy families that threatens the water resources in the area. CREDIT: Edgardo Ayala/IPS

APOPA, El Salvador , Jun 6 2022 (IPS) - Alex Leiva woke up at 4:00 a.m. to perform a key task for his family’s survival in the Salvadoran village where he lives: filling several barrels with the water that falls from the tap only at that early hour every other day.

If he does not collect water between 4:00 and 5:00 AM, he will not have another opportunity to fill the barrels for another two days.

“That’s what I have to do. Sometimes I manage to fill three barrels. The service is provided every other day,” Leiva, 32, a video producer, told IPS.

“It’s difficult to be in a situation like this, where the water supply is so inefficient,” he added.

In El Salvador there are at least 3,000 of these boards, community associations that play an essential role in the supply and management of water resources in rural areas and the peripheries of cities, in the face of the State’s failure to provide these areas with water.

Leiva lives in Lotificación Praderas, in the Cabañas canton, on the outskirts of the municipality of Apopa, north of the country’s capital, San Salvador.

This northern area covering several municipalities has been in conflict in recent years since residents of these communities began to fight against an urban development project by one of the country’s most powerful families, the Dueñas.

The Dueñas clan’s power dates back to the days of the so-called coffee oligarchy, which emerged in the mid-19th century.

Ciudad Valle El Angel is the name of the residential development to be built in this area on 350 hectares, and which will require some 20 million liters of water per day to supply the families that decide to buy one of the 8,000 homes.

The first feasibility permits granted by Anda to the consortium date back to 2015.

The homes are designed for upper middle-class families who decide to leave behind the chaos of San Salvador and to live with all the comforts of modern life, with water 24 hours a day, in the midst of poor communities that lack a steady water supply.

“There are people in my community who manage to fill only one barrel because there isn’t enough water pressure,” said Leiva, the father of a five-year-old boy and a nine-month-old baby girl.

Valle El Angel is an extensive region located on the slopes of the San Salvador volcano, in territories shared by municipalities north of the capital, including Apopa, Nejapa and Opico. 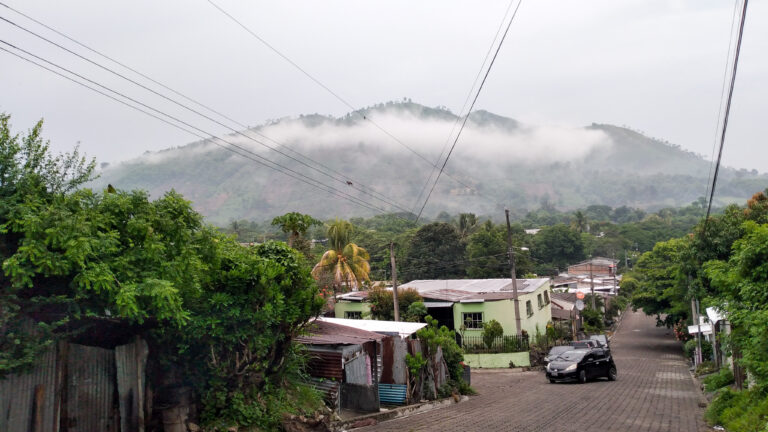 A general view of Parcelación El Ángel, in the Joya Galana canton, in the municipality of Apopa, near San Salvador. The community is fighting to defend the few natural resources that survive in the area, including a stream that originates in the micro-basin of the Chacalapa River. Water in the area is scarce, while Salvadoran authorities endorse an upscale real estate project that will use millions of liters per day. CREDIT: Edgardo Ayala/IPS

Sociedad Dueñas Limitada, the consortium managing the urban development project, received the definitive green light to begin construction: a thumbs-up from the Constitutional court, which on Apr. 29, 2022 rejected an unconstitutionality lawsuit filed in October 2019 by environmental organizations and communities in northern San Salvador.

The lawsuit was against a dubious agreement signed in 2016 between that company and Anda, which manages water in the country. The deal granted the project 240 liters of water per second – that is, about 20 million liters a day.

The consortium intends to dig eight wells in the area. Water will be extracted from the San Juan Opico aquifer, as well as from shallower groundwater from Apopa and Quezaltepeque.

“These agreements open the door to this type of illegal concessions handed over to private companies…it is a situation that is not being addressed from a comprehensive perspective that meets the needs of the people, but rather from a mercantilist perspective,” lawyer Ariela González told IPS.

She is part of the Foundation of Studies for the Application of Law (Fespad), a member of the Water Forum, which brings together some twenty civil organizations that have been fighting for fair and equitable distribution of water in the country.

González added: “It is our public institutions that legalize this dispossession of environmental assets, through these mechanisms that allow the companies to whitewash the environmental impact studies.”

The organizations and local communities argue that water is a human right, for the benefit of the community, and also insisted in the lawsuit that the aquifers are part of the subsoil, property of the State.

Therefore, if any company was to be granted any benefit from that subsoil, the concession could have to be endorsed by the legislature, which did not happen. 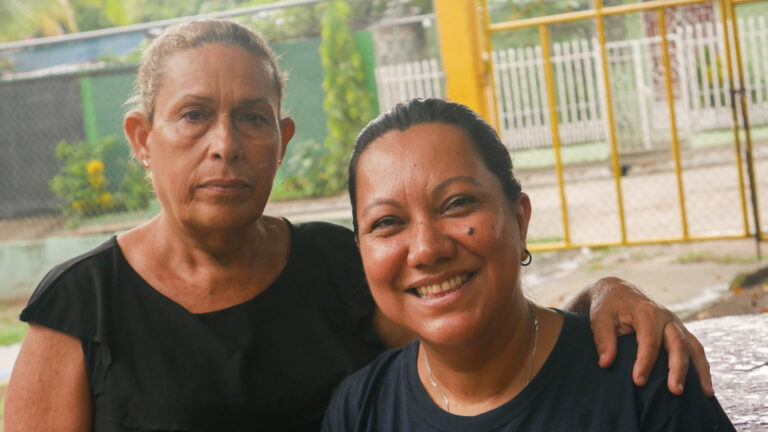 Sara García and Martina Vides are members of an ecofeminist collective that has been fighting for five years to prevent the construction of a large residential project in the area, Ciudad Valle El Ángel, owned by one of the most powerful families in El Salvador. CREDIT: Edgardo Ayala/IPS

The five Constitutional court magistrates were appointed without following the regular procedure on May 1, 2021, when the new legislature was installed, controlled by lawmakers from President Nayib Bukele’s party, Nuevas Ideas, which holds 56 out of 84 seats.

“This government continues to benefit big capital and destroy local territories,” Sara García, of the ecofeminist group Kawoc Women’s Collective and the Let’s Save the Valle El Ángel movement, which forms part of the Water Forum, told IPS.

García´s fellow activist Martina Vides added: “We want protection for the aquifers and to prevent the felling of trees.”

Both women spoke to IPS on a rainy gray afternoon on the last day of May, in the Parcelación El Ángel, where they live, in the Joya Galana canton, also in the municipality of Apopa, which is in the middle of the impact zone.

A short distance away is the river that provides water to this and other communities, which originates in the micro-watershed of the Chacalapa River. Water is supplied under a community management scheme organized by the local water board.

Vides pays six dollars a month for the water service, although she only receives running water three or four days a week.

According to official figures, in this country 96.3 percent of urban households have access to piped water, but the proportion drops to 78.4 percent in the countryside, where 10.8 percent are supplied by well water and 10.7 percent by other means.

Since the Ciudad Valle El Angel project began to be planned, environmentalists and community representatives have been protesting against it with street demonstrations and activities because it will negatively impact the area’s environment, especially the aquifers.

The struggle for water in El Salvador has been going on for a long time, with activists demanding that it be recognized as a human right, with access for the entire population, because the country is one of the hardest hit by the climate crisis, especially the so-called Dry Corridor.

For more than 10 years, environmental and social collectives have been pushing for a water law, reaching preliminary agreements with past governments. But since the populist Bukele came to power, the progress made in this direction has been undone.

In December 2021, the legislature approved a General Water Resources Law, which excluded the already pre-agreed social proposals, although it recognizes the human right to water and establishes that the water supply will not be privatized. However, this is not enforced in practice, as demonstrated by the Dueñas’ urban development project. 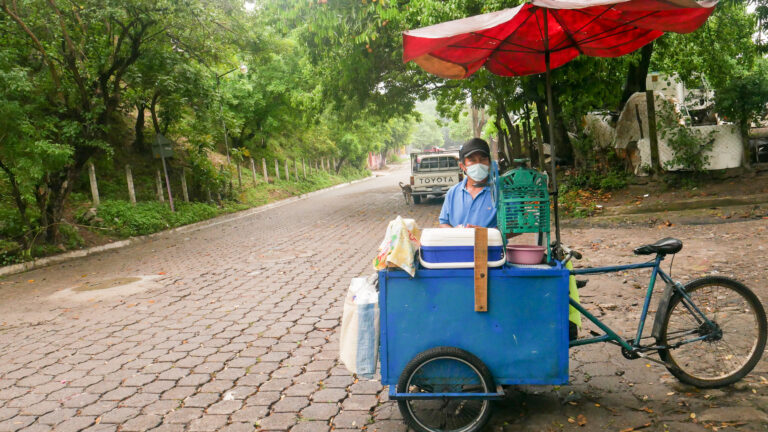 A vendor of a traditional ice cream in El Salvador, made with shaved ice bathed in fruit syrup, waits for customers on one of the streets of Parcelación El Ángel, in the municipality of Apopa, north of the capital. The locality is one of the epicenters where poor families have been organizing to block a residential development project, which will affect the local water supply and worsen the water shortage in the area. CREDIT: Edgardo Ayala/IPS

Not the only one

The residential development project is neither the first nor the only one in the area.

Residential complexes of this type have already been built in that area for the upper middle class, thanks to investments made by other wealthy families in the country, such as the Poma family.

And the same type of agreements have been reached with these other companies, in which the consortiums receive an endorsement to obtain water for their projects, said González.

The same thing has happened in the surroundings of the Cordillera del Bálsamo, south of the capital, where residential projects have been developed around municipalities such as Zaragoza, close to the beaches of the Pacific Ocean.

In Valle El Ángel there is also at least one company whose main raw material is water. This is Industrias La Constancia, which owns the Coca Cola brand in the country and other brands of juices and energy drinks, located in the municipality of Nejapa.

González, the Fespad lawyer, said that there should be a moratorium in the country in order to stop, for a time, this type of investment that threatens the country’s environmental assets, especially water.

But until that happens, if it ever does, and until the water supply improves, Alex Leiva will continue to get up at 4 a.m. every other day to fill his three barrels.