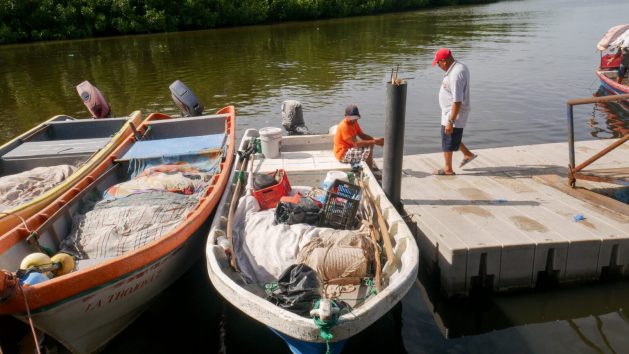 Salvadoran fisherman Nicolás Ayala, 63, walks to his boat at the San Luis La Herradura pier, on the Pacific coast of El Salvador, to begin a 24-hour fishing stint offshore. He said that due to the lack of a breakwater at the mouth, where the sea meets the estuary, boats have capsized and some of his colleagues have drowned, leaving their families unprotected because they have no kind of insurance. CREDIT: Edgardo Ayala/IPS

SAN LUIS LA HERRADURA, El Salvador , Jun 17 2022 (IPS) - At the pier, Salvadoran fisherman Nicolás Ayala checked the pocket of his pants to make sure he was carrying the hypertension pills he must take when he is at sea on a 24-hour shift. He smiled because he hadn’t forgotten them.

At the age of 63, “we are just aches and pains now,” he told IPS, while showing other pills he carried with him to relieve a toothache and other ailments.

Ayala lives in San Luis La Herradura, a small town located on the coastal strip of the department of La Paz, in south-central El Salvador, on the banks of the Estero de Jaltepeque estuary, which leads to the Pacific Ocean.

“I am worried that I will suffer a health mishap and I won’t be able to continue working and I will be left on the street, ruined,” he added, noting that, as an artisanal fisherman, he does not have any type of coverage for illness or work-related accidents.

This should not be the case, and they should be covered, as it is one of the highest risk jobs in the world, according to the United Nations Food and Agriculture Organization (FAO).

But that is the reality of the thousands of people dedicated to small-scale fishing in El Salvador and the rest of Central America on the two coasts of the isthmus, an activity that is vital for the food security of a large part of the 43 million inhabitants of this region, many of whom suffer serious social deprivation.

Like other sectors of the population, artisanal fishers work in almost absolute vulnerability, without any social measures to protect them or provide adequate coverage from the accidents or illnesses they face on a daily basis, and with only precarious health systems to rely on.

Ayala said that since there is no breakwater at the mouth, the point where the estuary lined by mangroves meets the sea, the waves become dangerous and sometimes overturn small motorboats.

And even if the fishermen know how to swim, they can drown anyway, because their boats fall on them or they get entangled in the nets. Two or three people a year die this way, he added.

“We have nothing, no accident insurance or anything, here only God can bless us, if we drown. If they find our bodies, that’s good, if not, well, the crabs can eat us,” he said, only half jokingly.

According to a FAO report from January 2021, in El Salvador in 2018 the fishing sector employed about 30,730 people, with a total fleet of 13,764 boats, 55 of which were used by the industrial sector and the rest by artisanal fishers, 50 percent of whose boats were motorized. 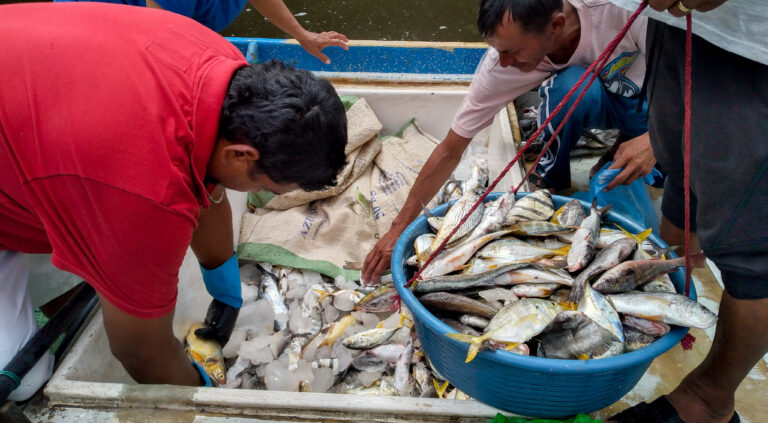 Fishers weigh part of the day’s catch, after fishing near the Estero de Jaltepeque estuary, on the Pacific coast of El Salvador. Most small-scale fishers in Central America do not earn enough and have to work harder and harder to support their families. CREDIT: Edgardo Ayala/IPS

Social security for all

FAO urged the countries of Central America to begin efforts to incorporate artisanal fisheries into national social security policies, during the Mesoamerican Forum on Social Protection in Artisanal Fisheries and Small-scale Aquaculture, held in May in Panama City.

The UN agency pointed out that worldwide, small-scale fishers account for half of the world’s fisheries production and employ 90 percent of the sector’s workforce, half of whom are women.

More than 50 million families in the world depend on small-scale fishing, according to FAO data.

In the case of Central America, the regional director of the Organization of the Fisheries and Aquaculture Sector of the Central American Isthmus (OSPESCA), José Infante, commented that all of the countries have been developing social protection systems for their populations, but that not all sectors have the same access to them, which increases inequality and vulnerability for those who are excluded.

“The artisanal fishing sector is the perfect example of this,” said the OSPESCA director.

These workers, like so many others without coverage, worry about reaching old age and no longer having the energy to go to sea on a daily basis, or suffering a work-related accident that leaves them unable to work. 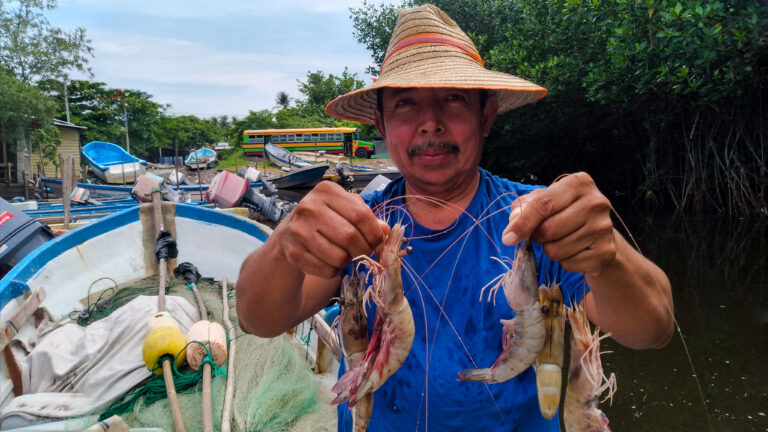 A Salvadoran fisherman shows some of the shrimp and other kinds of seafood he caught off the Pacific coast of El Salvador. FAO urges governments in Central America to promote social protection for small-scale fishing workers, given their vulnerability and the important role they play in food security in the region. CREDIT: Edgardo Ayala/IPS

“It will be a very difficult situation; If we don’t have a pension tomorrow we’re going to have a tough time,” Nicaraguan fisherwoman Arelis Flores, 23, mother of one, told IPS.

She is president of the Abraham Moreno cooperative in the Venecia Community, a village of fishers and farmers where 400 families live, located in the municipality of El Viejo, on the Pacific coast of the department of Chinandega in western Nicaragua.

“Around here only teachers retire (with pensions),” Flores said in a telephone interview, adding that her community is made up of poor families with very low levels of schooling.

Fishing in their village consists mainly of breeding red snapper (Lutjanus guttatus) in aquatic cages made with nets in the mangroves.

For his part, Salvadoran fisherman José Santos Martínez, also a resident of San Luis La Herradura, told IPS that artisanal fishers are about to finalize a proposal to present to the country’s authorities, demanding social coverage, in order to reduce their vulnerability.

Martínez is the president of the Salvadoran Confederation of Small-Scale Fishing, Aquaculture and Small-Scale Livestock Farming, the first of its kind in the country, which brings together three federations with a total membership of 3,500 men and women.

“If we are sick we can go to a national hospital, like every citizen, but we have no injury or sick leave coverage for the days we have to stay at home recovering,” said Martínez, 57.

By contrast, those who have a formal sector job, working for a private or state-owned company, are covered by the Salvadoran Social Security Institute (ISSS).

The ISSS, although it has many needs, is considered to provide better service than the national public hospital network, which covers everyone in this country of 6.7 million inhabitants.

Martínez said that achieving something similar for the artisanal sector would be a great step forward, given the accidents and illnesses suffered by fishers in their line of work.

Salvadoran fishers can join the ISSS as self-employed workers, but those interviewed told IPS that they could not afford the 40 dollars a month that the coverage costs.

Martínez said that, in his case, he suffers from intense back pain because of the impact from the constant bouncing of the boat over the waves.

“Because of that, I hardly go out fishing anymore,” he said.

He added: “Illnesses become more complicated, and in the end we die, we have no pension, no decent insurance, our families are completely unprotected.”

Martínez said the government should create a mechanism that offers coverage, but the problem is how to pay for it.

However, different proposals can be analyzed, he said. As an example, he pointed out that for decades artisanal fishers have paid a road tax charged to motorists of 0.20 cents of a dollar per gallon of fuel purchased, even though they are clearly not using the fuel to drive on the country’s roads.

“We have paid millions of dollars to the State, without receiving anything in return. Well, part of that money could be returned to us in the medical coverage we need,” he argued.

This charge of 0.20 cents per gallon of gasoline was recently eliminated, since it made no sense to charge small-scale fishers for using the roads. 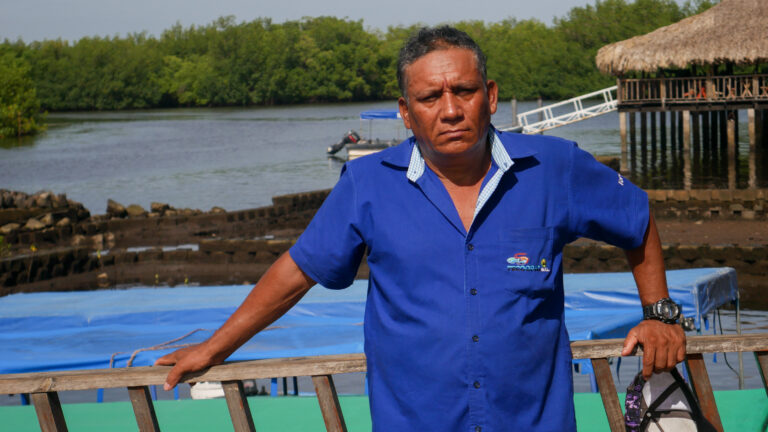 Gregorio Torres, president of the La Paz Federation of Fishing Production and Services Cooperatives, which brings together 900 fishers from this department in central El Salvador, complained that small-scale fishers are unprotected against illnesses and accidents at work, and need government support to obtain this type of coverage. CREDIT: Edgardo Ayala/IPS

His colleague, Gregorio Torres, said that the artisanal fishing sector is key, as it provides fresh products to the country’s markets and helps boost food security, but workers have been unprotected, without pensions or accident insurance.

“We don’t have any of that, and it would be a good idea to push that FAO idea forward,” he commented, referring to the proposal to include them in the social security system.

Torres is president of the La Paz Federation of Fishing Production and Services Cooperatives, which brings together 900 fishers.

In the case of Salvadoran artisanal fishers, the government should focus on promoting “decent work” in that sector, so that the seasonality and irregularity of their incomes can be overcome, she said.

And within the range of social security policies, the State could focus on the most urgent ones, such as medical coverage, she added.

In the meantime, fisherman Nicolás Ayala, at the San Luis La Herradura pier, climbed into his boat, revved up his 60-horsepower engine and headed out to sea, through the estuary.

“As long as I don’t die today, that’s good enough,” he said with his characteristic dark humor and a wry smile, as he motored off in his boat.