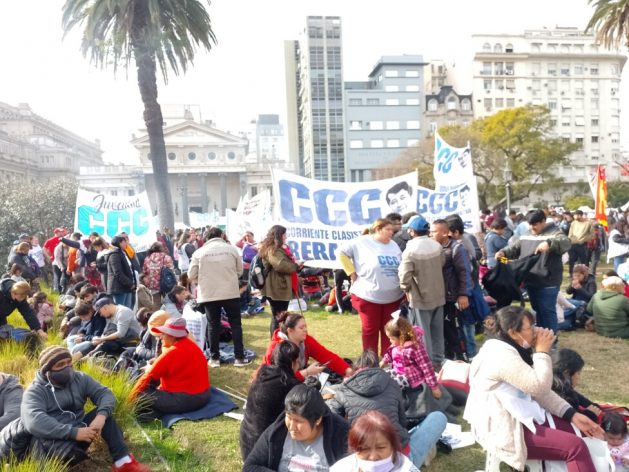 View of a demonstration by social organizations in a Buenos Aires square in July. The scene occurs almost every day in the capital of Argentina, a country where poverty has held steady at around 40 percent of the population since before the COVID-19 pandemic. The possibility of a social uprising is one of the fears in the face of the deepening socioeconomic crisis. CREDIT: Daniel Gutman/IPS

BUENOS AIRES, Jul 27 2022 (IPS) - Darío is a locksmith in Flores, a traditional middle-class neighborhood in the Argentine capital, who will have to stop working in the next few days. “Suppliers have suspended the delivery of locks, due to a lack of merchandise or because of prices,” he laments. His case is an illustration of an economy gone mad in a country that once again finds itself on the brink of the abyss.

The problems that have been dragging on in this South American country, where the vast majority of the population has become poorer over the last four years and social unrest is on the rise, exploded this month with an exchange and financial crisis that created enormous uncertainty about what lies ahead.

The Central Bank ran out of dollars, and imports, which in large part are a source of inputs for domestic production, were restricted to the maximum. The result is fear, speculation, increased social unrest and out-of-control inflation, which is causing price references to be lost and some companies and businesses are hedging their bets with preventive increases, or they even decide not to sell.

Today, in the streets and in the media, the questions raised are whether the country is on the eve of a social outbreak and whether President Alberto Fernández, so politically isolated that he is questioned by his own government coalition, will reach the end of his term in December 2023.

At that time, Argentina will be celebrating 40 years of democracy, marked by a succession of economic crises that have left an aftermath of growing inequality and have caused distrust to spread easily in society at the first signs that things are not going well.

The crisis deepened at the beginning of the month, when the Jul. 2 resignation of then Economy Minister Martín Guzmán triggered a 50 percent drop in the parallel exchange rate — known locally as the dollar blue — the only one that can be freely acquired in a country with exchange controls, and this, in turn, further fuelled inflation, which in 2021 stood at 50 percent and this year is already expected to end above 90 percent.

“There has been a series of imbalances in Argentina’s macroeconomy for years, which means that today the government does not have the tools to deal with exchange rate and financial pressures,” Sergio Chouza, an economist who teaches at the public University of Buenos Aires (UBA), told IPS.

“In this country the value of the dollar dominates expectations about prices and as a result it is increasingly difficult to avoid a ‘spiral’ of inflation. At the same time, government bonds have collapsed and are already yielding less than those of Ukraine,” he adds.

Chouza says that the COVID-19 pandemic was one of the major contributing factors in triggering a situation that seems to have gotten out of control.

“There was an expansion of public spending, as in most of the world. But the problem is that while most countries financed it with credit, Argentina could not do so because it was already over-indebted,” the expert explains. 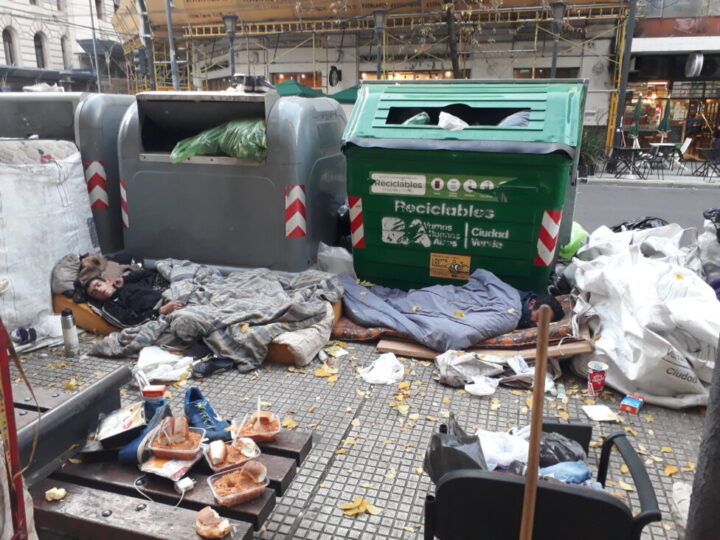 Homeless people who survive by picking through garbage in Buenos Aires sleep on the corner of a central street in Argentina’s capital. In 2021 the country experienced an economic recovery after the first year of the pandemic, but a rise in inflation in 2022 has aggravated the crisis once again. CREDIT: Daniel Gutman/IPS

The square in front of the Palacio de Tribunales, in the heart of downtown Buenos Aires, is overflowing with people. The youngest protesters hold banners from social movements from poor outlying neighborhoods, but there are also entire families with small children in their arms. Traffic in the surrounding area is completely cut off as the columns of marchers continue to pour in.

It is a Thursday in July, but this is an image that can be seen practically every day in the Argentine capital, where the most vulnerable social sectors are staging a series of protests because, in the midst of the crisis, the government has suspended the expansion of the Potenciar Trabajo program.

This is the name of the National Program for Socio-productive Inclusion and Local Development, which offers a stipend from the government in exchange for four hours of work in social enterprises, such as soup kitchens or urban waste recyclers’ cooperatives.

“In our neighborhoods things have been very hard for many years, but now it’s getting worse because we can no longer afford to put food on the table,” Fernando, who preferred not to give his last name, told IPS. He is a young man from Laferrere, one of the poorest localities on the outskirts of Buenos Aires, who was a waiter in a bar before becoming unemployed in 2021. Today he does occasional construction work.

Santiago Poy, a researcher at the Observatory of Social Debt at the private Argentine Catholic University (UCA) tells IPS that, with the combination of currency devaluation and inflation since 2018, wages have lost around 20 percent of their purchasing power.

“Poverty stood at around 25 percent in 2017, climbed to 40 percent in 2019 and remained steady after that. Today there is a feeling of widespread impoverishment, despite the fact that the unemployment rate is only seven percent, because 28 percent of workers are poor,” says Poy, describing the situation in this Southern Cone country of 47.3 million people.

After the height of the pandemic in 2020, social indicators improved in 2021 but are worsening again this year and the vast social assistance network does not seem to be sufficient to curb the decline.

“Social aid is not going to solve things in Argentina, because the macroeconomy is a permanent factory of poverty,” says Poy. 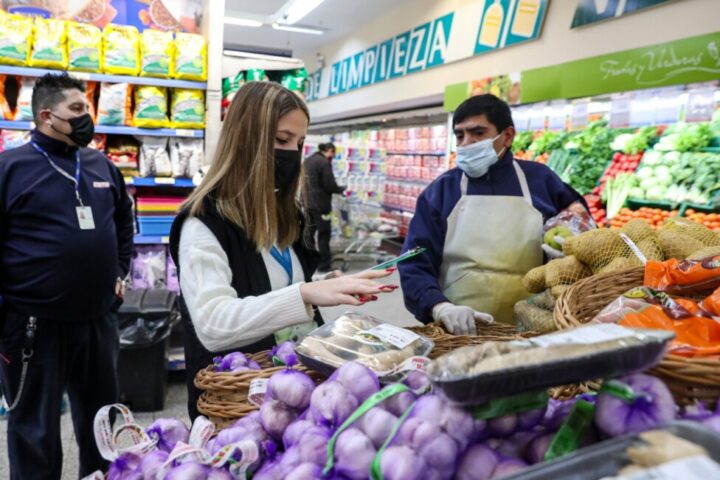 One of the operations carried out last weekend by Economy Ministry personnel in supermarkets in Buenos Aires, in order to control price hikes on basic products and “dismantle speculative maneuvers,” as reported. CREDIT: Economy Ministry

“I am ashamed to set some prices at which I have to sell such basic things as bread, flour or sugar,” Fernando Savore, president of the Federation of Grocery Stores of the province of Buenos Aires, which groups 26,000 businesses in the country’s most populous region, tells IPS.

Savore says that since the beginning of the year the price hikes by suppliers have been constant, but that they skyrocketed in the first week of July, after the economy minister resigned.

“We have seen increases of more than 10 percent in food and more than 20 percent in cleaning products. I don’t think they are justified, but every time the dollar goes up, prices go up,” says Savore, who adds that grocers are hesitant to sell some products because of uncertainty about the costs of restocking them.

And in a context of overall jitters, the government unofficially leaks rumors about economic measures, which do not then materialize but fuel the sense of uncertainty.

President Fernández said that the lack of dollars would be solved if agricultural producers sold a good part of their soybean harvest, which they are currently withholding, worth 20 billion dollars.

They are obliged to export at the official exchange rate, whose gap with the parallel dollar has reached a record level of more than 150 percent, and they are apparently waiting for a devaluation.

On Jul. 25, the new economy minister, Silvina Batakis, met in Washington with the managing director of the International Monetary Fund (IMF), Kristalina Georgieva, to assure her that this country will comply with the agreement signed with the multilateral lender this year, which includes goals to reduce the fiscal deficit and increase the Central Bank’s reserves.

But in Argentina, few people dare to predict where the crisis is heading, and how quickly it will evolve.