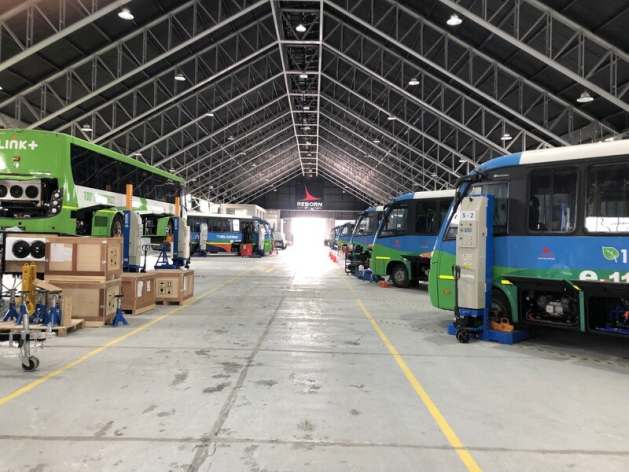 View of the interior of the Reborn plant, where electric buses are manufactured, for now for the state-owned copper company Codelco, to which a hundred units are to be delivered in December, destined for the El Teniente mine, the largest underground copper mine in the world, with some 3,000 tunnels. CREDIT: Orlando Milesi/IPS

SANTIAGO, Jul 15 2022 (IPS) - The manufacture in Chile of an electric bus christened Queltehue, a wading bird native to the country, is another step towards electromobility and in the fight against pollution that triggers frequent environmental crises and smog emergencies in Santiago and other cities.

The National Electromobility Strategy, updated and relaunched in 2021, aims for 100 percent of the public transport vehicle fleet and 40 percent of private cars to be electric by 2050. By 2035, internal combustion engine cars will no longer be sold in this country.

That means that in less than 30 years some five million vehicles will switch from fuel to electricity, avoiding the emission of some 11 million tons of carbon dioxide (CO2) per year and reducing spending on oil and petroleum products by more than 3.3 billion dollars a year.

Electric mobility can also be clean and with zero emissions, if this long narrow South American country sandwiched between the Andes Mountains and the Pacific Ocean takes advantage of its enormous potential to produce solar and wind energy thanks to the abundant sunlight in the Atacama Desert and the strong winds in coastal areas and in the southern region of Magallanes.

However, much remains to be done because there are currently only about 2,750 electric vehicles in circulation in Chile and there are only about 310 public chargers to serve them.

A notable stride forward in the last four years has been the increase in the number of electric public transport buses, which now account for 20 percent of the 6,713 buses that serve passengers in Santiago, where 7.1 million of the country’s 19.1 million inhabitants live. 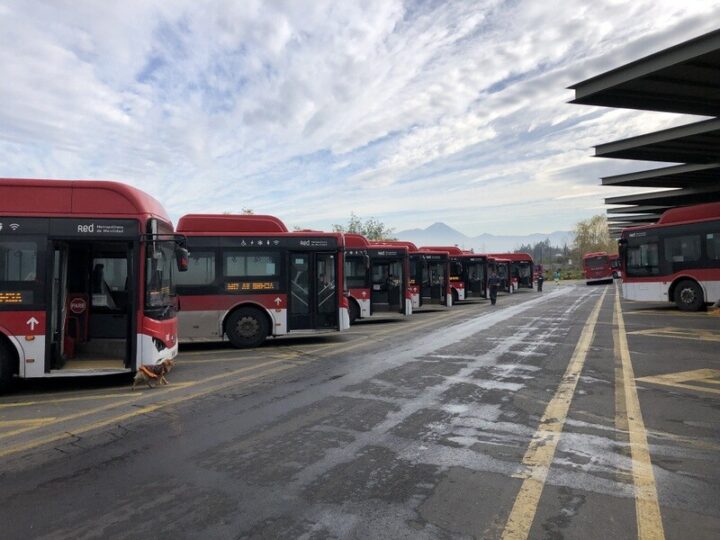 At the Los Espinos Electroterminal, in the municipality of Peñalolén in the Andes foothills bordering Santiago, the electric buses of the private company Metbus begin and end their routes through the Chilean capital. “We noticed that the passengers are more relaxed,” company inspector José Bazán, who traveled twice to Shenzhen, China to buy the electric buses, told IPS. CREDIT: Orlando Milesi/IPS

In May, Minister of Transport and Telecommunications Juan Carlos Muñoz confirmed that another 70 electric buses will serve some 50,000 daily passengers in the working-class municipalities of La Pintana, San Joaquín and Puente Alto, on the southern outskirts of Santiago.

“Bringing electromobility and its benefits to sectors that have been left behind by development not only makes a city more sustainable, it makes it more inclusive,” he said at the time.

“Quality transportation is fundamental for people to leave their cars parked and opt for more efficient modes, which will allow us to make Santiago an environmentally friendly city,” Muñoz added.

So far, electric buses for public transport, a sector that is in private hands in Chile, have come from Chinese companies, especially BYD and Foton, but that is expected to change as electric mobility expands.

The strategy not only targets public transportation, but also freight, commercial vehicles and vehicles used in key industries in the local economy, such as mining. 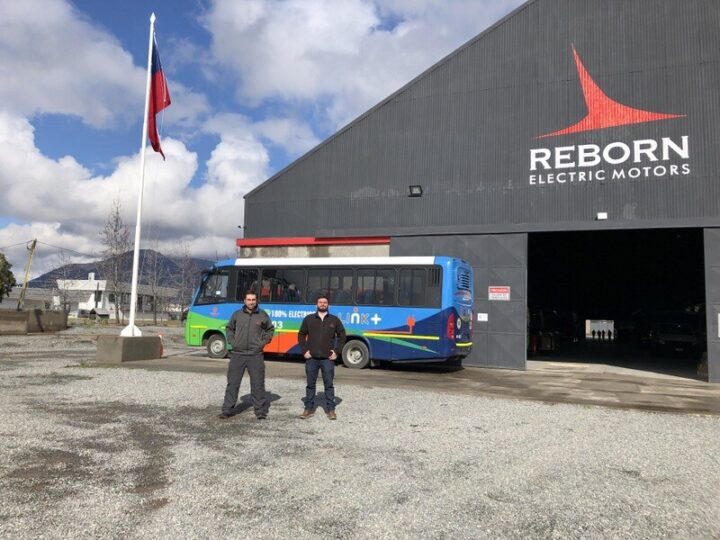 Engineers Ricardo Repenning and Felipe Cevallos, partners in Reborn, pose for a photo in front of their factory in Rancagua, the first in Chile to manufacture and reassemble electric buses, for now for the state copper industry, but with the intention of extending to urban and rural public transport. CREDIT: Orlando Milesi/IPS

Successful experience in the mines

Felipe Cevallos, a 32-year-old mechanical engineer, and Ricardo Repenning, a 33-year-old electrical engineer, are partners in the Chilean company Reborn Electric Motors, which began by converting diesel vehicles to electric ones, but this year will manufacture 104 electric buses for the El Teniente mine of the state-owned copper company Codelco.

These buses do not emit CO2 or make noise and can safely carry 24 passengers each.

“We have successfully carried passengers a total of 210,000 kilometers in the mine in difficult conditions of mud and salt, steep slopes and high levels of humidity,” Cevallos proudly told IPS during a visit to the company’s plant in the municipality of Rancagua, 86 kilometers south of Santiago.

The 3,000-square-meter automotive facility employs 50 people whose average age is 30, and can produce up to 200 vehicles per year.

The buses are made up of 45 percent Chilean parts, while the bodies are brought from Brazil, the engines come from Canada and the batteries are made in China.

“We manufacture the power and control branches, the distribution strip and the low to high voltage domains, the structures, displays and software to run the systems and the engine cooling cycles and other components,” Cevallos said. 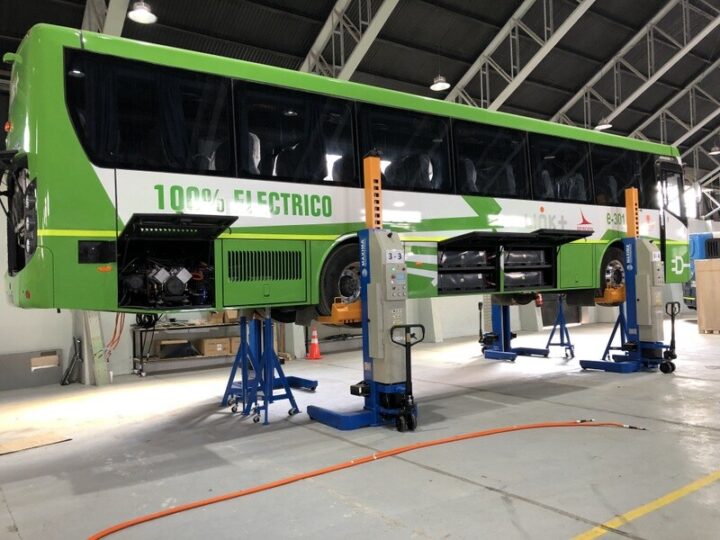 A picture of one of the electric buses on the assembly line at the Reborn plant. Each bus contains 45 percent Chilean parts, while the rest are imported from Brazil, Canada and China. CREDIT: Orlando Milesi/IPS

At El Teniente, the world’s largest underground copper deposit, there are 24 double-gun 150-kw chargers that can charge two Queltehue buses in 40 minutes.

(The scientific name of the Queltehue or Southern Lapwing, the species for which the bus was named, is Vanellus chilensis.)

Other buses operate from Rancagua and another 10 chargers are being installed at the terminal of Transportes Link, the operator of the public transport service, in partnership with Reborn.

Codelco, the world’s largest copper producer and exporter, is committed to using only electric vehicles to transport workers at El Teniente, which is located under the hill of the same name in the municipality of Machalí, some 120 kilometers from Santiago.

“The 104 buses that we will deliver will transport the workers between their arrival points and locker rooms to the interior of the mine. Each one travels 15 to 20 kilometers, largely through tunnels,” said Repenning.

He added that Reborn manufactures and reassembles electric buses. 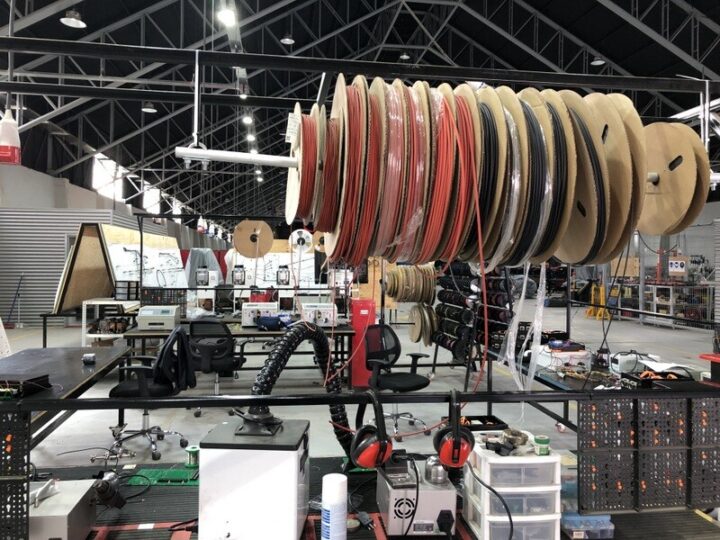 Cables of all colors and sizes are used at the Reborn electric bus plant in the Chilean town of Rancagua. The company is recognized by the international Society of Automotive Engineers. CREDIT: Orlando Milesi/IPS

The company is now focused on transportation in the mining industry, but its technology can be applied to urban and rural transportation – and that is the direction of its future expansion.

Reborn has been recognized by SAE International, formerly named the Society of Automotive Engineers.

“When the batteries were very heavy, a lot of passenger capacity was lost. Today, batteries have greatly improved their energy density,” and that facilitates the electrification of public transportation, Repenning said.

Luciano Ahumada, director of the School of Information Technology and Telecommunications at the Diego Portales University (UDP), told IPS that “electromobility is a tremendous tool, perhaps the most important one, for achieving carbon neutrality and thus making us responsible for our environment.”

Ahumada said that among the biggest problems of electromobility are the high price of vehicles and the lack of confidence among users that they can count on a network that recharges batteries in a timely manner. 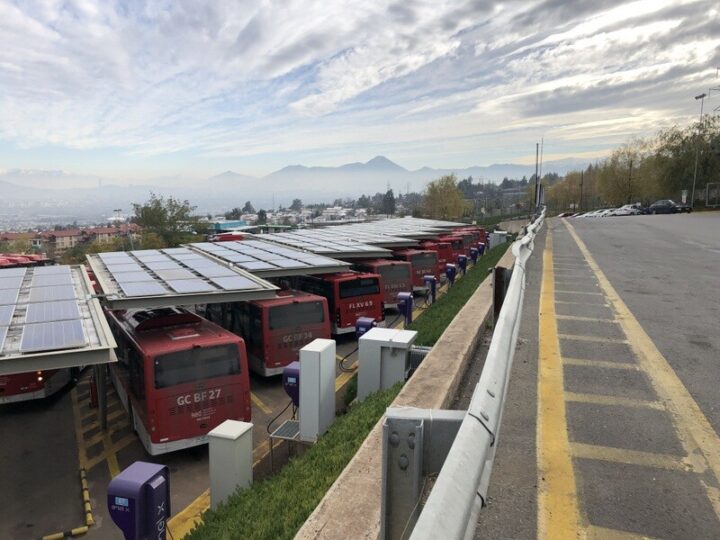 The private company Metbus is a pioneer in electromobility in Chile. It brought the first two electric buses from China in 2017. It now operates 1,430 electric buses, the largest fleet in South America, with vehicles equipped with air-conditioning, WIFI, USB and camera systems. At the Electroterminal it installed solar panels to generate the energy it consumes in its offices. CREDIT: Orlando Milesi/IPS

An electric bus in Chile costs around 300,000 dollars and a car around 50,000 dollars. But the operating cost of both is a third or a quarter of that of combustion engine vehicles.

“The biggest challenge is to generate an incentive for the purchase and production of electric vehicles and to create and install charging infrastructure and a charging management system that is reliable and sustainable,” said Ahumada.

Héctor Novoa, a professor at the UDP Faculty of Architecture who is working on a doctoral thesis on electric mobility, believes that the Chilean electromobility strategy has pros and cons.

“Chile has the largest fleet in the southern hemisphere with electric buses in public transportation,” he noted.

“But its public policy has gone hand in hand with favoring the involvement of actors that have a share of the energy business. Electromobility is also a business model,” Novoa said.

He cited as examples the Copec group of companies, dedicated to forestry, energy and gas stations, and the Chilean subsidiary of the Italian transnational Enel, focused on electricity and gas. 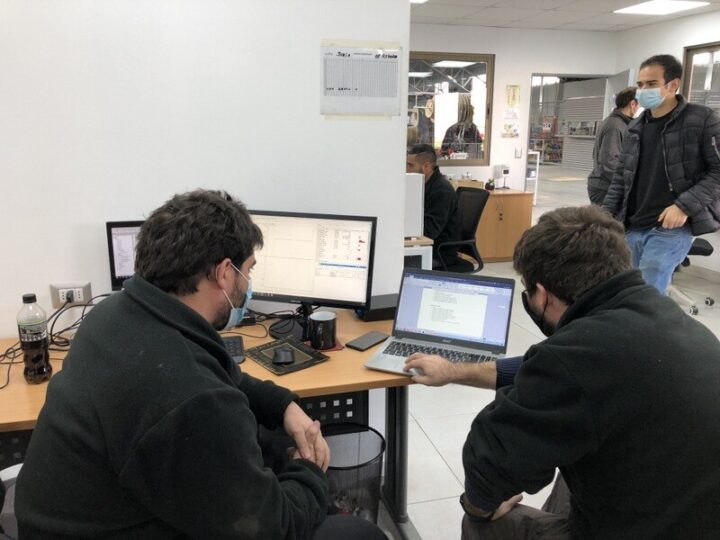 Many young university graduates work at the Reborn company that operates in the city of Rancagua, south of the Chilean capital, where electric buses are assembled for the El Teniente copper mine, but which has a goal of producing buses for urban and rural public transport. CREDIT: Orlando Milesi/IPS

“Copec has electric vehicle terminals. Where previously the buses were supplied with fuel, now they are sold electricity. Public policy has gone hand in hand with the private sector to secure for it certain parts of the business,” Novoa told IPS.

But the academic regretted that the installation of public electric chargers “has targeted certain upscale neighborhoods and municipalities of Santiago, which points to a strengthening of inequality.

“The charging infrastructure is too limited to allow charging in public places without being exposed to being vandalized,” he acknowledged.

Novoa also called for greater clarity regarding how the city would absorb the new charging infrastructure and make the distribution more egalitarian.

He concurred with Ahumada that “electromobility is a key element for decarbonization” and he also believes that the high price of electric vehicles limits their development.

He stressed, however, that “electromobility is based on an awareness linked to scientific evidence in international forums that brings the ecological and scientific world closer to politics.”

The academic also urged consideration of a largely ignored aspect: the fact that an important part of vehicle emissions comes not from exhaust but from brake pad and tire wear that produces toxic particulate matter.

“Climate change has accelerated the transformation processes associated with decarbonizing not only transport, but also other areas linked to industry, such as energy generation,” he said.