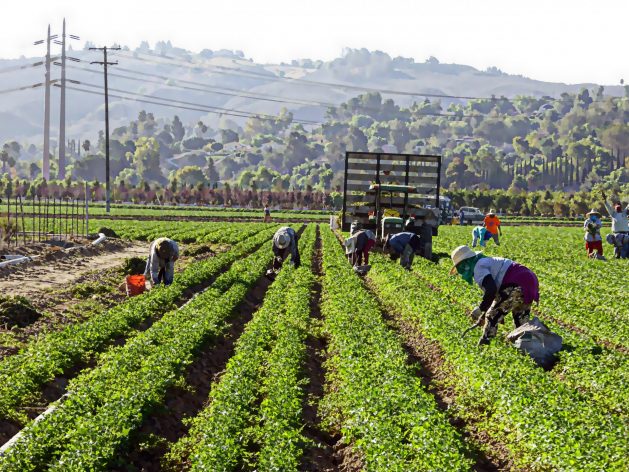 Mexican workers harvest produce on a farm in the western U.S. state of California. The number of temporary agricultural workers from Mexico has increased in recent years in the United States and with it, human rights violations. CREDIT: Courtesy of Linnaea Mallette

MEXICO CITY, Jul 8 2022 (IPS) - Eduardo Reyes, originally from Puebla in central Mexico, was offered a 40-hour workweek contract by his recruiter and his employer in the United States, but ended up performing hundreds of hours of unpaid work that was not authorized because his visa had expired, unbeknownst to him.

Hired by recruiter Vazquez Citrus & Hauling (VCH), Reyes and five other temporary workers reached the United States between May and September 2017, months before starting work for Four Star Greenhouse in the Midwest state of Michigan.

In 2018, they worked more than 60 hours per week, received bad checks, and never obtained a copy of their contract, even though U.S. laws require that they be given one.

When they complained to Four Star and to their recruiter about the exploitative conditions, the latter turned them over to immigration authorities for deportation in July of that year because their visas had expired, which they had not been informed of by their agent.

In December 2017, the U.S. Department of Labor (DOL) authorized the arrival of 145 workers to the Four Star facilities in Carleton, Michigan. They were to earn 12.75 dollars per hour for 36 hours a week between January and July 2018.

Reyes’ case is set forth in complaint 2:20-CV-11692, seen by IPS, filed in the Southern Division of the U.S. District Court for the Eastern District of Michigan by six Mexican workers against the company and its manager, whom they accuse of wage gouging, forced labor and workplace reprisals.

This story of exploitation has an aggravating factor that shows the shortcomings of the U.S. government’s H-2A temporary agricultural workers program, or H-2A visa program.

The United States created H-2 visas for unskilled temporary foreign workers in 1943 and in the 1980s established H-2A categories for rural workers and 2B for other labor, such as landscaping, construction, and hotel staff.

These visas allow Mexicans, mainly from rural areas, to migrate seasonally to the U.S. to work legally on farms included on a list, with the intermediation of recruiting companies.

In 2016, the US Department of Transportation fined VCH, based in the state of Florida, for 22,000 dollars for a bus accident in which six H-2A workers were killed while returning from Monroe, Michigan to Mexico.

Two years later, the DOL’s Wage and Hour Division banned VCH and its owner for three years due to program violations in the state of North Carolina, such as failure to reimburse travel expenses and payroll and workday records. However, both continued to operate in the sector.

The workers’ odyssey begins in Mexico, where they are recruited by individual contractors -workers or former workers of a U.S. employer, colleagues, relatives or friends in their home communities – or by private U.S. agencies.

Reyes’ case illustrates the problems of labor exploitation, forced labor and the risk of human trafficking to which participants in the H-2A program are exposed, without intervention by Mexican or U.S. authorities to prevent human rights violations.

Advocates for the rights of the seasonal workers and experts pointed to worsening working conditions, warned of the threat of human trafficking and forced labor, and complained about the prevailing impunity.

According to Lilián López, representative in Mexico of the U.S.-based Polaris Project, the design and operation of the program result in a high risk of human trafficking and forced labor, due to factors such as the lack of supervision and interference by recruiters.

“Economic vulnerability puts migrants at risk, because many workers go into debt to get to the United States, and that gives the agencies a lot of power. They can set any kind of requirement for people to get the jobs. Sometimes recruiters make offers that look more attractive than they really are. That is fraud,” she told IPS in Mexico City.

The number of calls to the National Human Trafficking Hotline operated by Polaris in the US reflects the apparent increase in abuses. Between 2015 and 2017, 800 people on temporary visas, 500 of which were H-2A, called the hotline, compared to 2,890 people between 2018 and 2020 – a 360 percent increase.

Evy Peña, spokesperson for Mexico’s Migrant Rights Center, said temporary labor systems are designed to benefit employers, who have all the control, along with the recruiters.

“From the moment the workers are recruited, there is no transparency. There is a lack of oversight by the DOL, there are parts of recruitment that should be overseen by the Mexican government. There are things that the Mexican government should work out at home,” she told IPS from the northern city of Monterrey.

She said the situation has worsened because of the pandemic.

The United States and Mexico have idealized the H-2A program because it solves the lack of employment in rural areas, foments remittances that provide financial oxygen to those areas, and meets a vital demand in food-producing centers that supply U.S. households.

But the humanitarian costs are high, as the cases reviewed attest. Mexico’s Ministry of Labor and Social Welfare has 369 labor placement agencies registered in 29 of Mexico’s 33 states. For overseas labor recruitment, seven operate – including four in Mexico City -, a small number compared to the thousands of visas issued in 2021.

For its part, the DOL reports 241 licensed recruiters in the US working for a handful of companies in that country.

The ones authorized in Mexico do not appear on the US list and vice versa, in another example of the scarce exchange of information between the two partners.

In 2021, the states with the highest demand for Mexican labor were Florida, Georgia, California, Washington and North Carolina, in activities such as agriculture, the operation of farm equipment and construction.

The United States and Mexico agreed to issue another 150,000 visas for temporary workers in an attempt to mitigate forced migration from the south, which will also include Central American seasonal workers.

Details of the expansion of the program will be announced by Presidents Joe Biden and Andres Manuel Lopez Obrador at a meeting to be held on Jul. 12 at the White House, with migration as one of the main topics on the agenda. 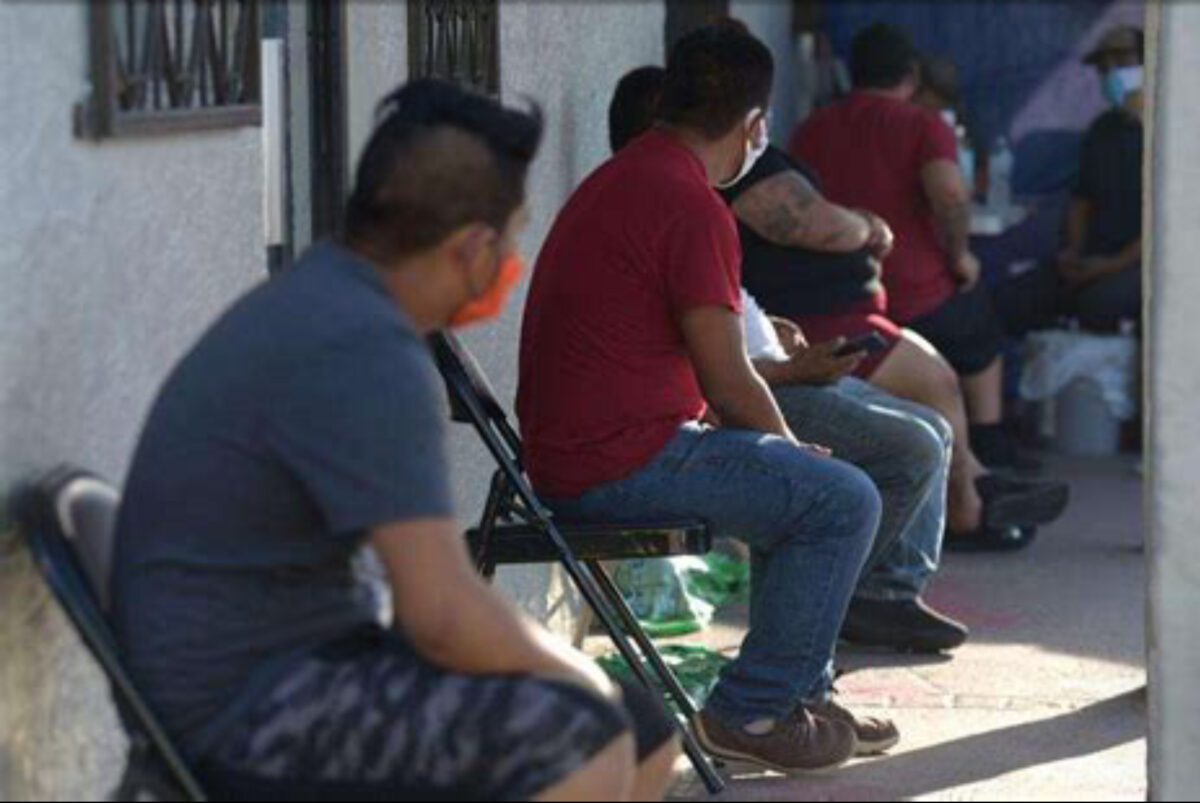 Mexican farm workers wait to be tested for COVID-19 in 2020 in Immolakee, a town in the southeastern U.S. state of Florida. The pandemic hit H-2A visa holders, who are mainly engaged in temporary agricultural work, hard. CREDIT: Doctors Without Borders

Lidia Muñoz, a doctoral student at the University of Oregon in the United States who has studied labor recruitment, stresses that there are no policies on the subject in Mexico, even though the government is aware of the problem.

“There are regulations for recruitment agencies that are not followed to the letter,” she told IPS from Portland, the largest city in the northwestern state of Oregon. “Most recruiters are not registered. The intermediaries are the ones who earn the most. There is no proper oversight.”

Article 28 of Mexico’s Federal Labor Law of 1970 regulates the provision of services by workers hired within Mexico for work abroad, but in practice it is not enforced.

This regulation requires the registration of contracts with the labor authorities and the posting of a bond to guarantee compliance, and makes the foreign contractor responsible for transportation to and from the country, food and immigration expenses, as well as full payment of wages, compensation for occupational hazards and access to adequate housing.

In addition, Mexican workers must be entitled to social security for foreigners in the country where they offer their services.

While the Mexican government could resort to this article to protect the rights of migrants, it has refused to apply it.

Between 2009 and 2019, the Ministry of Labor conducted 91 inspections of labor placement agencies in nine states and imposed 12 fines for about 153,000 dollars, but did not fine any recruiters of seasonal workers. Furthermore, the records of the Federal Court of Conciliation and Arbitration do not contain labor lawsuits for breach of that regulation.

Mexico is a party to the International Labor Organization (ILO) Fee-Charging Employment Agencies Convention, which it apparently violates in the case of temporary workers.

The Mexican consulate in Denver, Colorado received three labor complaints, dated Jul. 25, Aug. 12 and Oct. 28, 2021, which it referred to “specialized allies in the matter, who provided the relevant advice to the interested parties,” according to an SRE response to a request for information from IPS.

The consulate in Washington received “anonymous verbal reports” on labor issues, which it passed on to civil society organizations so that “the relevant support could be provided.”

Consular teams were active in some parts of the US in 2021. For example, Mexican officials visited eight corporations between May and September 2021 in Denver, Colorado.

Mexico, meanwhile, is in non-compliance with the ILO’s “General principles and operational guidelines for fair recruitment” of 2016.

These guidelines stipulate that hiring must be done in accordance with human rights, through voluntary agreements, free from deception or coercion, and with specific, verifiable and understandable conditions of employment, with no attached charges or job immobility.

Ariel Ruiz, an analyst with the U.S.-based Migration Policy Institute, is concerned about the expansion of the H-2A visa program without improvements in rights.

“There are labour rights violations before the workers arrive in the US, in recruitment there are often illegal payments, and we keep hearing reports of employers intimidating workers,” he told IPS from Washington.

“There are also problems in access to health services and legal representation” in case of abuse, added the analyst from the non-governmental institute.

In the last decade, at least 12 lawsuits have been filed in US courts by program workers against employers.

Muñoz, the expert from Oregon, said the trials can help reform the system.

“There have been cases that have resulted in visas for trafficking victims. But it is difficult to see changes in the United States. They may be possible in oversight. Legal changes have arisen because of wage theft from workers,” she said.

López, of Polaris, said the lawsuits were a good thing, but clarified that they did not solve the systemic problems. “What is needed is a root-and-branch reform of the system,” she said.

The United States has made trade union freedom in Mexico a priority. Peña asked that it also address the H-2A visa situation.

“If they’re serious about improving labor rights, they can’t ignore the responsibility they have for migrant workers. It’s like creating a double standard,” she said.

With regard to the expansion of the temporary visa program to Central Americans, the experts consulted expressed concern that it would lead to an increase in abuses.

This article was produced with support from the organizations Dignificando el Trabajo and the Avina Foundation’s Arropa Initiative in Mexico.