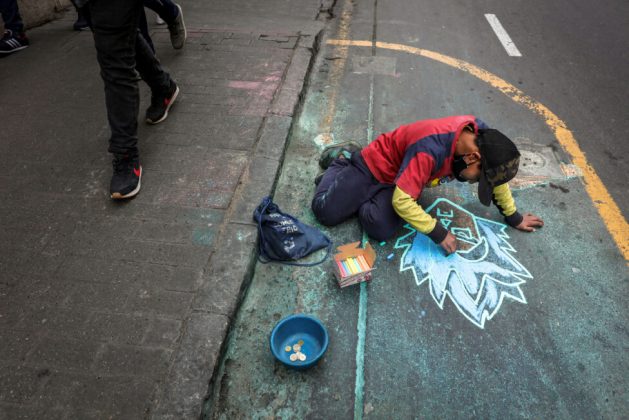 Along a street in the historic center of Lima, 11-year-old Pedro makes chalk drawings on the sidewalk for at least four hours a day to bring some money home. He is one of thousands of children and adolescents in Peru who work as child laborers, which violates their human rights. CREDIT: Mariela Jara/IPS

LIMA, Jul 29 2022 (IPS) - In the afternoons he draws with chalk on the sidewalk of a downtown street in the Peruvian capital. Passersby drop coins into a small blue jar he has set out. He remains silent in response to questions from IPS, but a nearby ice cream vendor says his name is Pedro, he is 11 years old, and he draws every day on the ground for about four hours.

Pedro, too shy or scared to answer, is one of the children and adolescents between the ages of five and 17 engaged in child labor in Peru, a phenomenon that grew during the years of the pandemic due to the rise in poverty, which by 2021 affected a quarter of the population.

According to official figures, children and adolescents involved in child labor number 870,000 nationwide, some 210,000 more than in 2019, Isaac Ruiz, a social worker and director of the non-governmental Centre for Social Studies and Publications (Cesip), told IPS in an interview.

Cesip has been working for 46 years advocating for the rights of children and adolescents.

"For every year of education that a child loses, he or she also loses between 10 and 20 percent of income in his or her adult life; poverty is reproduced." -- Isaac Ruiz

Ruiz explained that in order to define child labor, two concepts must be separated. The first refers to the economic activities that children between five and 17 years of age perform in support of their families for payment or not, as dependent workers for third parties, or for themselves.

The second is work that violates their rights and must be eradicated, which is addressed by national laws and regulations in accordance with international human rights standards established by the International Labor Organization (ILO) and other agencies.

The ILO classifies child labor as a violation of fundamental human rights, which is detrimental to children’s development and can lead to physical or psychological damage that will last a lifetime. Child labor qualifies as work that is harmful to the physical and mental development of children.

On the contrary, it is not child labor, according to the agency, when children or adolescents participate in stimulating activities, voluntary tasks or occupations that do not affect their health and personal development, nor interfere with their education. For example, helping parents at home or earning money doing a few chores or odd jobs.

The minimum working age in Peru is 14 years old. Work is classified as child labor when it is performed below that age, when it is dangerous by its very nature or because of the conditions in which it is performed, and when the workday exceeds the legally established limit, which is 24 hours per week if the child is 14 years old, and 36 hours per week if the child is between 15 and 17.

The worst forms of child labor are when adults use children and adolescents for criminal activities or exploit them commercially or sexually. 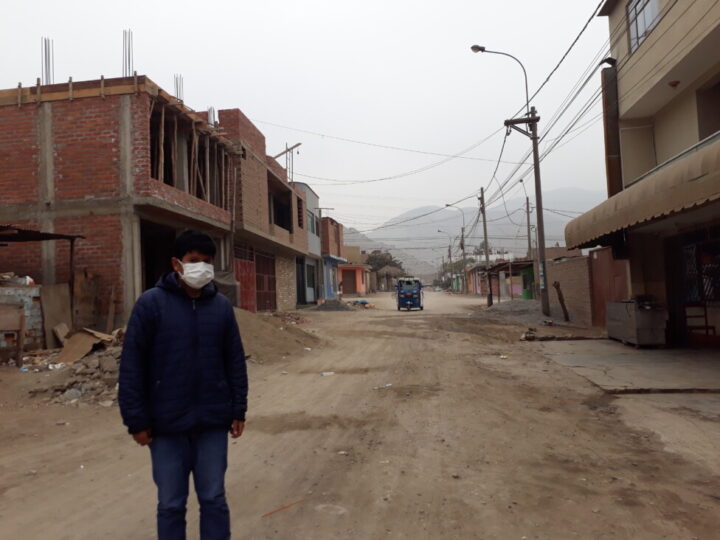 Juan Diego Carayonqui, 15, poses for a photo on the street where his home and the small store on its first floor are located in Huachipa, a low-income neighborhood on the outskirts of Lima. He works 49 hours a week in the small family business, longer than the hours legally stipulated for adolescents in Peru. CREDIT: Mariela Jara/IPS

According to figures from the government’s National Institute of Statistics and Informatics (Inei), 1,752,000 children and adolescents were working in 2021. That number was 2.6 percent higher than the pre-pandemic 25 percent recorded in 2019.

Of this total, 13.7 percent are engaged in hazardous activities, which means that 870,000 minors between the ages of five and 17 engage in work that poses a risk to their physical and mental health and integrity.

In this South American country of around 33,035,000 people, children and adolescents in this age range represent 19 percent, or about 6,400,000, of the population according to INEI data.

“Not all economic activities carried out by children and adolescents must be eradicated. If they have a formative role, for example helping out in a family business for an hour a day or on weekends, and they go to school, have time for their homework, to socialize, and for recreation, they will probably be learning about the business,” said Ruiz.

But, he added, “the situation changes when it becomes child labor, when the activities are hazardous.

“Child labor is when it is beyond their physical, emotional or mental capabilities and when it takes up too much of their time and competes negatively with education, homework and the possibility of recreation,” he explained.

As examples, he cited selling things on the street going from car to car, picking through waste in garbage dumps, carrying packages or crates in markets, doing domestic work, or working in mines or agricultural activities where they are exposed to toxic substances harmful to their health.

The government must accelerate the design and application of public policies for the eradication of child labor, Ruiz said.

“For every year of education that a child loses, he or she also loses between 10 and 20 percent of income in his or her adult life; poverty is reproduced,” he said.

The expert called for measures to correct this situation in order to prevent child workers from continuing to be left behind in terms of opportunities and rights. 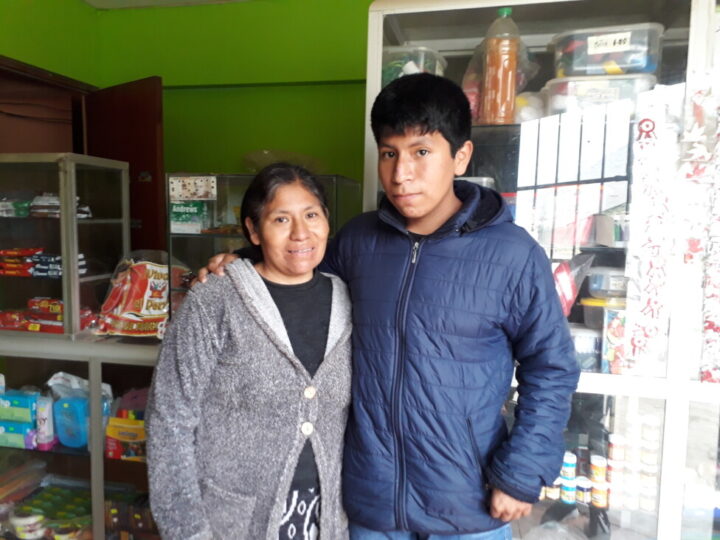 “If I had children I wouldn’t make them work,” says Juan Diego Carayonqui, who since the age of seven has spent his afternoons working in their small family store to help his mother, with whom he poses in the shop where he spends a large part of his day. CREDIT: Mariela Jara/IPS

“I would not make my children work”

Juan Daniel Carayonqui is 15 years old and since the age of seven has been working in the small shop that operates out of his home, located in Huachipa, a poor hilly neighborhood on the outskirts of the capital with an estimated population of 32,000 inhabitants, mostly people who have come to the city from other parts of the country.

His mother, María Huamaní, arrived in Lima at the age of 10 from the central Andes highlands department of Ayacucho, fleeing the civil war that killed her mother and father. Orphaned, she was raised by aunts and uncles. Eventually she met the man who would become her husband and together they started a family. In their view, work is the way to progress in life.

In a park near his house, Carayonqui told IPS: “I started working when I was seven years old in the store, with simple tasks, memorizing the prices of the products. Then I gained experience and learned how to deal with customers, and now I work in the afternoons when I get out of school.”

Carayonqui is in his fourth year of high school, which he will finish in 2023, and his goal is to study biology at university. His dream is to travel around the country; he loves nature and dreams of discovering some unknown species and helping to bring new value to Peru’s biodiversity.

He has spent much of eight of his 15 years behind the counter of the store where he sells groceries and stationery products, from 2:00 in the afternoon until closing time, about seven hours a day. This adds up to 49 hours a week, so Carayonqui would officially be considered a victim of child labor.

But in his family’s view, work is the road to progress. His paternal grandmother, who also moved to Huachipa from the highlands, has a garden where she grows vegetables to sell at the wholesale market. Carayonqui helps her out on Wednesdays, carrying the heaviest bundles.

“My grandmother says that through work you overcome poverty and achieve your dreams, but I think it’s better to overcome it by studying,” he said.

Carayonqui knows that as a good son he must help his mother when she asks him to: “I have to help her because she needs me and because I love her.” But he also understands that spending his entire childhood and adolescence working has deprived him of focusing on his homework, of going out to play with his friends, of having fun.

He gets up every day at six in the morning, gets ready to go to school now that classrooms are open again this year post-pandemic, has breakfast and goes to school. He comes home at 1:30 p.m., eats lunch and by 2:00 p.m. he is at the store. His mother often leaves him in charge because she has other work to do. 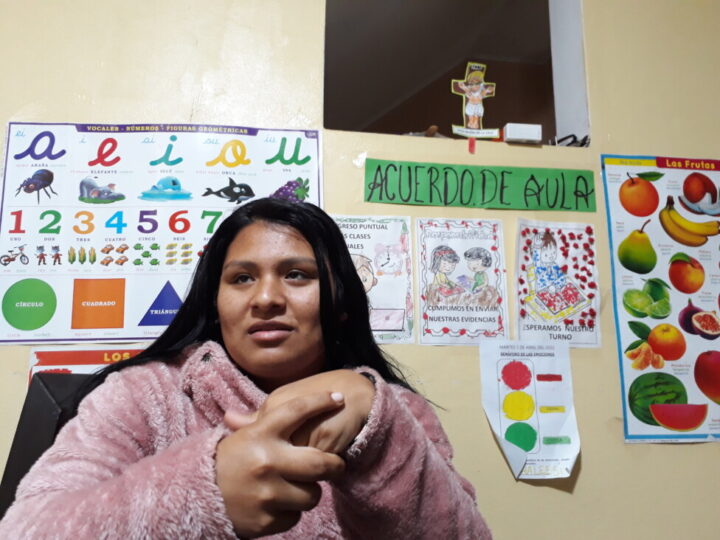 Margoth Vásquez, a 17-year-old Peruvian teenager, worked 72 hours a week as a nanny and housekeeper during the pandemic to earn an income and cover her needs, she told IPS during an interview in a neighbor’s living room near her home on the outskirts of Lima. Her goal is to finish high school this year and begin to study nursing the following year. CREDIT: Mariela Jara/IPS

Margoth Vásquez also lives in Huachipa. She is 17 years old and was interviewed by IPS at the home of one of her mother’s friends. She wants to remodel her family home with what she earns as a nurse; her dream is to study nursing.

During the pandemic, she had to work to buy what she needed and pay off a debt. Her father, who doesn’t live with her and doesn’t pay alimony, gave her a chest of drawers for her birthday, which he didn’t pay for: she had to.

She took work caring for an eight-month-old baby and cleaning the family’s home from 6:30 a.m. to 7:00 p.m. Monday through Saturday. In exchange for working as a housekeeper and nanny for more than 72 hours a week she earned about 150 dollars a month.

She worked there for a year and a half. But it was stressful because she could not find time to do her homework and turn it in (classes were online because of the pandemic). This year she will finish high school and next year she will apply to study nursing.

“I want to help my grandmother who raised me, take care of her, get married, have children. To have a good life,” she said.