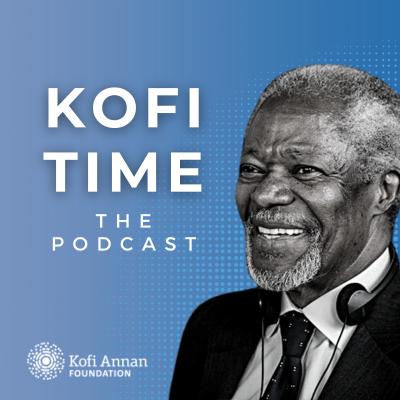 Regarded as one of the modern world’s icons of diplomacy, what is Kofi Annan’s legacy today? What can we learn from him, and how can we prepare for tomorrow, based on his vision for a better world?

In this exclusive 10-part podcast, Ahmad Fawzi, one of Kofi Annan’s former spokespersons and communication Advisor, will examine how Kofi Annan tackled a specific crisis and its relevance to today’s world and challenges. 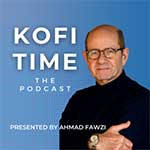 Kofi Annan’s call to bring all stakeholders around the table — including the private sector, local authorities, civil society organisations, academia, and scientists — resonates now more than ever with so many, who understand that governments alone cannot shape our future.

Join us on a journey of discovery as Ahmad Fawzi interviews some of Kofi Annan’s closest advisors and colleagues including Dr Peter Piot, Christiane Amanpour, Mark Malloch-Brown, Michael Møller and more.

Listen and follow us on Apple Podcasts, Spotify and SoundCloud

Brought to you by the Kofi Annan Foundation and the United Nations Information Service.

Join us as we take a journey of discovery about Kofi Annan’s leadership style and what makes it so relevant and important today.

In this episode, Lord Malloch Brown shares insights with podcast host Ahmad Fawzi on how Kofi Annan strengthened the United Nations through careful diplomacy and bold reforms, and how significant advances were made during his tenure as Secretary-General. He comments on the state of multilateralism today, as the organization is buffeted by the crisis in Ukraine and the paralysis of the Security Council.

In this episode of Kofi Time, host Ahmad Fawzi interviews renowned journalist Christiane Amanpour. Together, they discuss a world in turmoil, and what would Kofi Annan – who did so much for peace – do today?

Christiane shares her thoughts on the ‘Kofi Annan way’, the difficult job mediators and peacebuilders face, and the courage they must show. With Ahmad, they deliberate whether there is a type of ‘calling’ for those who work in this field.

In this episode of Kofi Time, our special guest is Dr Peter Piot. Dr Piot discusses how he and Kofi Annan worked together to reverse the HIV/AIDs tide that swept through Africa in the 1990s, through patient but bold diplomacy, innovative partnerships and an inclusive approach that brought to the table previously marginalized communities. Dr Piot and podcast host Ahmad Fawzi discuss whether this approach be replicated today as the world enters the third year of the COVID-19 pandemic and must prepare for future heath emergencies.

In episode 4 of Kofi Time, our special guest is Catherine Bertini. Ms. Bertini discusses how she worked with Kofi Annan to fight hunger and malnutrition around the world. Not only is access to food far from universal, but it is also severely impacted by conflicts and climate change. As food prices increase and access becomes even more challenging, how can we replicate Kofi Annan’s approach to improving food systems to make sure no one gets lefts behind on the path to food security globally?

In episode 5 of Kofi Time, host Ahmad Fawzi interviews diplomat Michael Møller on Kofi Annan’s special kind of leadership. A respected leader among his peers and the public, Kofi Annan served the people of the world with courage, vision and empathy. Embodying moral steadfastness and an acute political acumen, his leadership was one of a kind. What drove him, and how can we emulate his leadership style to face today’s global challenges?

Kofi Time: The Podcast · Leadership: Then and Now | Kofi Time with Michael Møller

In episode 6 of Kofi Time, our special guest is Zeid Raad Al Hussein. Zeid discusses his friendship with Kofi Annan and how they worked together to protect human dignity and promote human rights. Through the creation of the Human Rights Council and International Criminal Court, Kofi Annan played a critical role in establishing the mechanisms that we have today to protect human rights and fight impunity. How can we uphold Kofi Annan’s legacy and ensure that respect for human rights is not just an abstract concept but a reality?

Mr Fawzi is the former head of News and Media at the United Nations. He worked closely with Kofi Annan both during his time as Secretary-General and afterwards, on crises including Iraq and Syria. Before joining the United Nations, he worked for many years in broadcast journalism, as a news editor, reporter and regional news operations manager. From 1991 to 1992, he was the News Operations Manager for the Americas for Visnews — now Reuters Television. Also with Reuters Television, Mr Fawzi served as Regional News Manager for Eastern Europe, based in Prague, from 1989 to 1991 — a time of tumultuous political change in that region. Concurrently with his assignment in Prague, he coordinated coverage of the Gulf war, managing the war desk in Riyadh, as well as the production centre in Dahran, Saudi Arabia. In 1989, Mr Fawzi was Reuters Television Bureau Chief for the Middle East, based in Cairo. Prior to that, he worked in London as News and Assignments Editor for Reuters Television. Previously, he was Editor and Anchor for the nightly news on Egyptian Television.

Mark Malloch‐Brown is the president of the Open Society Foundations. He has worked in various senior positions in government and international organizations for more than four decades to advance development, human rights and justice. He was UN Deputy Secretary‐General and chief of staff under Kofi Annan. He previously Co-Chaired the UN Foundation Board. Malloch-Brown has worked to advance human rights and justice through working in international affairs for more than four decades. He was UN deputy secretary‐general and chief of staff under Kofi Annan. Before this, he was administrator of the UNDP, where he led global development efforts. He covered Africa and Asia as minister of state in the United Kingdom’s Foreign Office. Other positions have included World Bank vice president, lead international partner in a political consulting firm, vice-chair of the World Economic Forum, and senior advisor at Eurasia Group. He began his career as a journalist at the Economist and as an international refugee worker. He was knighted for his contribution to international affairs and is currently on leave from the British House of Lords. Malloch-Brown is a Distinguished Practitioner at Oxford University’s Blavatnik School of Government, an adjunct fellow at Chatham House’s Queen Elizabeth Program, and has been a visiting distinguished fellow at the Yale Center for the Study of Globalization.

Christiane Amanpour is a renowned journalist, whose illustrious career has taken her from CNN where she was Chief international correspondent for many years, to ABC as a Global Affairs Anchor, PBS and back to CNN International for the global affairs interview program named after her. She has received countless prestigious awards, including four Peabody Awards, for her international reporting and her achievements in broadcast journalism. She served as a member of the board of directors of the Committee to Protect Journalists and a UNESCO Goodwill Ambassador for Freedom of Expression and Journalist Safety. She is also an honorary citizen of Sarajevo and was made a Commander of the British Empire in 2007 by Her Majesty Queen Elizabeth.

Dr Peter Piot co-discovered the Ebola virus in Zaire in 1976. He has led research on HIV/AIDS, sexually transmitted diseases, and women’s health, mostly in sub-Saharan Africa. Peter Piot was the founding Executive Director of UNAIDS and Under-Secretary-General of the United Nations from 1995 until 2008. Under his leadership, UNAIDS has become the chief advocate for worldwide action against AIDS. It has brought together ten organizations of the United Nations system around a common agenda on AIDS, spearheading UN reform Peter Piot was the Director of the Institute for Global Health at Imperial College; London and he held the 2009/2010 “Knowledge against poverty” Chair at the College de France in Paris. He is a Fellow of the Academy of Medical Sciences and was elected a foreign member of the National Academy of Medicine of the US National Academy of Sciences.

An accomplished leader in food security, international organization reform and a powerful advocate for women and girls, Catherine Bertini has had a distinguished career improving the efficiency and operations of organizations serving poor and hungry people in the United States and around the world. She has highlighted and supported the roles of women and girls in influencing change. She was named the 2003 World Food Prize Laureate for her transformational leadership at the World Food Programme (WFP), which she led for ten years, and for the positive impact she had on the lives of women. While in the US government, she expanded the electronic benefit transfer options for food stamp beneficiaries, created the food package for breastfeeding mothers, presented the first effort to picture healthy diets, and expanded education and training opportunities for poor women. As a United Nations Under-Secretary-General, and at the head of the World Food Programme for ten years (1992 to 2002), she led UN humanitarian missions to the Horn of Africa and to Gaza, the West Bank, and Israel. During her time serving with WFP, Catherine Bertini was responsible for the leadership and management of emergency, refugee, and development food aid operations, reaching people in great need in over 100 countries, as well as advocacy campaigns to end hunger and to raise financial resources. With her World Food Prize, she created the Catherine Bertini Trust Fund for Girls’ Education to support programs to increase opportunities for girls and women to attend school. At the Maxwell School of Citizenship and Public Affairs at Syracuse University, where she is now professor emeritus, she taught graduate courses in humanitarian action, post-conflict reconstruction, girls’ education, UN management, food security, international organizations, and leadership. She served as a senior fellow at the Bill and Melinda Gates Foundation early in its new agricultural development program. Bertini is now the chair of the board of the Global Alliance for Improved Nutrition (GAIN). Concurrently, she is a Distinguished Fellow at the Chicago Council on Global Affairs. She has been named a Champion of the 2021 United Nations Food Systems Summit. She is a professor emeritus at Syracuse University.

Zeid Ra’ad Al Hussein is IPI’s President and Chief Executive Officer. Previously, Zeid served as the UN’s High Commissioner for Human Rights from 2014 to 2018 after a long career as a Jordanian diplomat, including as his country’s Permanent Representative to the UN (2000-2007 & 2010-2014) and Ambassador to the United States (2007-2010). He served on the UN Security Council, was a configuration chair for the UN Peace-Building Commission, and began his career as a UN Peacekeeper in the former Yugoslavia. Zeid has also represented his country twice before the International Court of Justice, served as the President of the Assembly of State Parties to the Rome Statute of the International Criminal Court from 2002-2005, and in 2005, authored the first comprehensive strategy for the elimination of Sexual Exploitation and Abuse in UN Peacekeeping Operations while serving as an advisor to Secretary-General Kofi Annan. Zeid is also a member of The Elders, an independent group of global leaders working together for peace, justice and human rights, founded by Nelson Mandela. Zeid holds a PhD from Cambridge University and is currently a Professor of Practice at the University of Pennsylvania.