The pair were charged on August 3 under the contentious Criminal Law (Codification and Reform) Act, as amended through the Cyber and Data Protection Act, which became law in December last year despite spirited opposition from press freedom lobbyists and civic society groups.

The act has been criticised for giving too many powers to law enforcement authorities and the information ministry, allowing the monitoring of private electronic communication in violation of the country’s constitution.

What is significant, however, about the latest arrests of journalists is that while the crackdown on press freedom has for years been driven by the ruling Zanu-PF party against its critics, the two journalists, together with the paper’s attorney, were held for reporting on a private business enterprise believed to be run by politically connected individuals.

Senior reporter Desmond Chingarande who wrote the story, and Wisdom Mdzungairi, the Newsday editor-in-chief, were charged under a Cyber and Data Protection Act section which critics say vaguely criminalises the communication or spread of “false data messages.”

The two now have the dubious distinction of being the first journalists to be charged under the cybersecurity law. 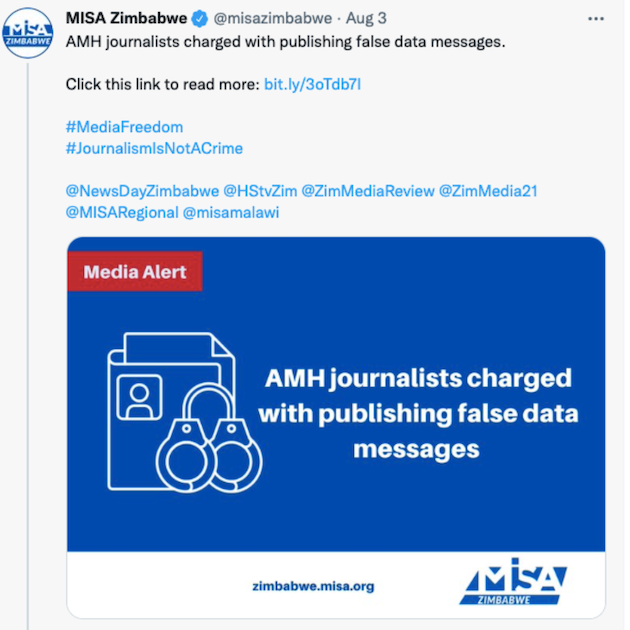 The arrests have been condemned by rights groups. The Media Institute of Southern Africa (MISA) reiterated that journalists have a Constitutional right to right to seek, receive and impart information. Credit: Twitter

“MISA Zimbabwe reiterates its long-standing position that when journalists are undertaking their professional duties, they will be exercising their constitutional rights as stipulated in Section 61 of the Constitution and that they have a right to seek, receive and impart information,” the press freedom watchdog said in a statement.

“Any limitation to this right should qualify under the three-pronged test, which requires legality, proportionality and necessity. It is also our position that criminal sanctions on false news are disproportionate and not necessary,” the statement added.

These concerns come as Zimbabwe’s record as one of the places where journalism is considered a dangerous profession worsens.

“It represents a serious threat to freedom of the media and expression as well as access to information of public interest as provided under respective sections of the Zimbabwean constitution,” Majoni told IPS.

What began with the promise of wide-ranging reforms after the rise of Emmerson Mnangagwa as president on the back of the ouster of Robert Mugabe morphed into an escalation of the crackdown on government critics, with media practitioners being especially targeted.

Opposition politicians and rights activists have found themselves in police detention, with press freedom advocates not being spared despite calls by countries that include the European Union and the US raising concerns about what are seen as arbitrary arrests.

In May, on the occasion of World Press Freedom Day, Reporters Without Borders noted that Zimbabwe had declined further on the Press Freedom Index, from 130 in 2021 to 137 in 2022.

The country has witnessed a steady increase in journalist arrests, which have failed to result in custodial sentences despite the routine arrests and weeks behind bars awaiting trial.

“These arrests are a worrying trend as it is technically criminal law provisions that are being invoked to criminalise journalism,” said Otto Saki, a Zimbabwean human rights lawyer.

Several journalists have been arrested in the past few months, and there are concerns that the crackdown on journalists is being escalated in the run-up to crucial elections next year with electioneering already in full swing.

“It’s always the case that during power contestations in the run-up to major political events, we see governments invoking such laws,” Saki said.

Despite numerous court challenges regarding the unconstitutionality of the arrests of journalists, government spokesperson Ndavaningi Mangwana is on record saying journalists are not above the law and “must have their day in court.”

“They could have simply appealed to the Data Protection Authority to intervene and would have appealed to either the Voluntary Media Council of Zimbabwe or the Zimbabwe Media Commission. So, this is like some people are being used to test the new law,” Majoni told IPS.

However, ahead of the 2023 polls, journalists are not the only sector being targeted by the government, as nongovernmental organisations are also being threatened with stringent monitoring under the proposed Private Voluntary Organisations Amendment Bill.

If passed into law, it will see NGOs being required to furnish the government with itineraries and accounting that show the source of their funding as authorities claim external funds are being used to undermine the ruling party.

The bill has already been criticised for its ambitions to curtail freedom of association at a time NGOs are carrying out voter education programs ahead of the 2023 elections while millions in the country require food assistance.

For now, it is not clear what fate awaits the Newsday journalists as they are expected to appear in court by way of summons.