This archaic, and at times, violent fact is driving a biblical justice authority, an international activist and a team of culturally and religiously diverse advocates to raise their voices with member states, just before world leaders arrive for the high-level segment of the 77th UN General Assembly session which commences in New York City September 20.

The trip will highlight the twelve nations currently imposing the death penalty for apostasy and blasphemy charges, calling for its immediate repeal.

Freedom of religion or belief is universally regarded as fundamental human right and is protected by international covenants and national constitutions alike.

However, courts continue to mete out unjustifiably long prison sentences and even death sentences to individuals for non-violent, victimless conduct such as committing blasphemy or apostasy.

Recently, Nigerian humanist Mubarak Bala was sentenced to an unimaginable 24 years’ imprisonment for an allegedly blasphemous Facebook post he made expressing his disbelief in an afterlife.

Though the death penalty is not actually imposed upon a convicted individual in a vast majority of cases, the sentence itself relegates convicts to years and decades of prolonged imprisonment on death row, denial of medical care while in prison, withholding of legal counsel, and endless interrogation. 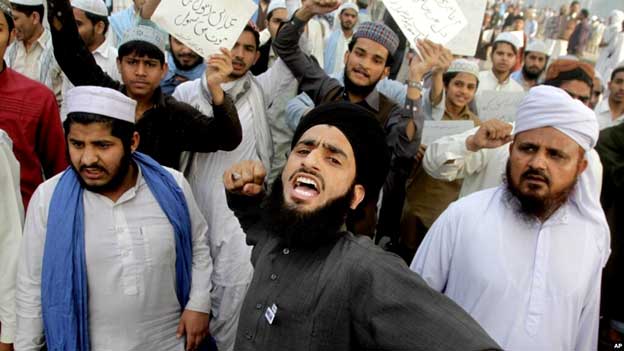 Pakistanis rally in support of Mumtaz Qadri who was convicted and executed for a blasphemy-motivated killing of a former governor, in Lahore, Pakistan, Feb. 2016. Credit: Voice of America

Previously, Asia Bibi, a Pakistani woman, languished on death row for eight years on charges of blasphemy simply for drinking water from a canteen while picking berries with a group of Muslim women.

After her release and acquittal in 2019, Asia was forced to flee her home country in fear of reprisal attacks by radical Islamists.

In 2014, a pregnant Sudanese woman Mariam Ibrahim – who was imprisoned on apostasy charges for her marriage to a Christian man, and as a woman born to a Muslim father – was forced to give birth to her second child while her legs remained shackled to the cell floor.

As a Christ follower, I am reminded of times when God revealed his heart for justice through stories like that of Esther, whom was strengthened to boldly intercede for an oppressed group of religious minorities.

The time is now for United Nations Member States to do the same, through their set own of convictions, in an effort to create communities of human flourishing and safety for those who are persecuted for freedom of religion or belief.

Speaking on Islam’s position on blasphemy, there is much evidence that Prophet Muhammad pardoned his worst critics. Blasphemy laws and inhumane punishments for blasphemy have no legitimacy in the Quran.

The Quran does not command Muslims to kill blasphemers.
Surah (verse) 4:140 of the Quran states – “If you hear people denying and ridiculing God’s revelation, do not sit with them unless they start to talk of other things…”

There is no reference to killing and or issuing fatwas.

Even where moratoriums on the death penalty exist, faith minorities and individuals who express views and perspectives deviating from those prescribed by the majority religion can be in tremendous danger.

Mauritania, which has upheld a moratorium on the death sentence since 1987, convicted blogger Mohamed Cheikh Ould Mkhaitir of apostasy and sentenced him to death as recently as 2014 for an article he wrote criticizing the use of Islam to justify the caste system in his country. Fortunately, Mkhaitir was released from prison in 2019.

In Pakistan, where the death sentence is often issued to perceived blasphemers – most often Christian and Ahmadi Muslim minorities – but not carried out– laws criminalizing apostasy and blasphemy embolden state and non-state actors alike to commit acts of violence against innocent civilians.

In July 2021, a police constable slashed and killed a man named Muhammad Waqas who had been previously acquitted of blasphemy charges; the perpetrator explicitly stated perceived blasphemy as the crimes’ impetus.

A few months later, in December 2021, a Sri Lankan national Priyantha Kumara was lynched by a mob and had his body burned by an angry mob in the Pakistani city of Sialkot.

Kumara was a garment factory manager who had been accused of committing blasphemy after removing an Islamic poster from the factory’s walls to prepare for a renovation project.

These non-state actors, fortified by lackluster laws, pose a serious obstacle to human rights, free speech and dignity, creating a system where sometimes even state supported religious leaders call for the death penalty and other inhumane punishments.

A more recent and equally horrific incident occurred in Sokoto Nigeria, when young Christian college student Deborah Samuel Yakubu was stoned to death and set on fire by her very own Muslim classmates.

Days prior, Yakubu had angered the perpetrators by questioning why her school course’s WhatsApp chat was being used to discuss contentious religious affairs rather than focusing on academic issues.

Additionally, approximately 40% of UN Member States – some of them holding seats in the Human Rights Council – criminalize apostasy and blasphemy, despite their lack of the death sentence for such ‘crimes’.

However, it is not without criticism and attention by human rights and religious freedom activists and even representatives of the United Nations who have emphasized the inhumanity of apostasy and blasphemy laws and called for their repeal.

This includes the UN General Assembly, the UN Secretary-General, the UN High Commissioner for Human Rights, the Human Rights Council, and the Special Rapporteurs on freedom of religion or belief, and on extrajudicial killings, respectively.

Now, civil society is taking matters into its own hands.

Efforts to work toward the abolition of the death penalty for apostasy and blasphemy have been a bottom-up grassroots approach. Next week, a delegation of human rights and religious freedom advocates will travel to the United Nations to meet with representatives from the missions of numerous UN Member States, including Luxembourg, Canada, Nigeria, Sri Lanka, Niger, and Australia.

Their goal is to increase support among UN Member States for the insertion of language in the UNGA Resolution on Extrajudicial, summary or arbitrary executions stating that “the death penalty should never be imposed as a sanction for apostasy, blasphemy, or other perceived religious offense.

As a capstone to the multifaith, multicultural and multidisciplinary United Nations advocacy fly-in, the group will host an issue briefing pointing to the critical proposed resolution language, calling for the immediate repeal of the death penalty for apostasy and blasphemy charges.

The briefing, which is open to the press, will spotlight survivors in their own voice. The development of pluralistic resilient communities which uphold basic human rights and allow for human flourishing amongst inevitable interdependent globalized societies depend on the undaunted actions those in power.

We call upon all Member States to join us in this fight toward international religious freedom by supporting the IRF Campaign’s resolution language today.” More info here.