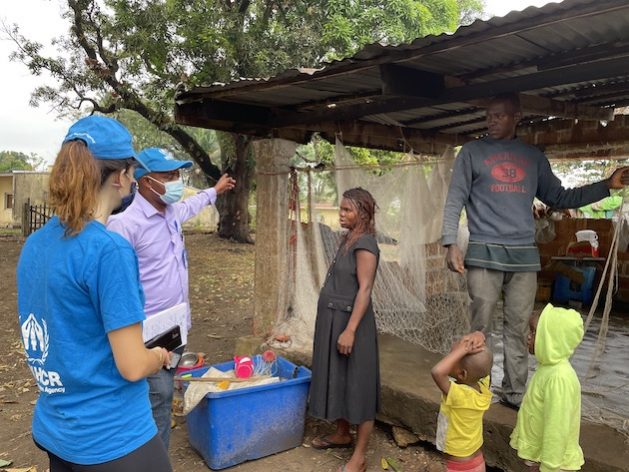 Two refugees identified as Muhindo and his wife Harriet are among the new waves of people leaving the Democratic Republic of Congo following inter-communal clashes in South-West DRC. UN agencies have called for substantive action on refugees, especially regarding food security. Credit: UNHCR

Co-hosted by the UN Refugee Agency (UNHCR), the World Food Programme (WFP), and the Permanent Mission of Switzerland to the United Nations, a panel discussion held on September 14, 2022, also explored innovative solutions to combat the food shortage and increase the capacity of refugees. It came ahead of a UN Security Council meeting on the global food crisis and protection.

Food insecurity has become an enormous problem. In 2019, WFP estimated that 145 million people were facing acute food insecurity. Now the organization predicates 345 million people are facing insecurity. The combination of climate change shocks, COVID-19, and conflict has pushed several countries, such as Somalia, Afghanistan, Ethiopia, South Sudan, and Yemen, to a very real risk of famine. 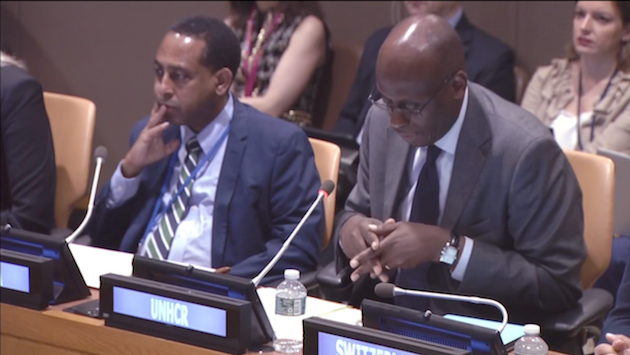 Among those particularly vulnerable to the negative impacts of food insecurity are refugees and internally displaced people.

Raouf Mazou, UNHCR’s Assistant High Commissioner for Operations and moderator of the event, explained that the increased vulnerability of refugees is primarily to the nature of displacement and the loss of community safety networks that accompany it.

“When fleeing many refugees sell or are forced to leave behind their assets their journey to safety is often full of dangers. Family and community support systems breakdown. They usually lose their income and often find themselves with no option but to employ harmful strategies as coping mechanisms.”

Coping mechanisms refer to tactics a family or community employs to compensate for a loss in income. In response to COVID-19 lockdowns, UNHCR reported instances of transactional sex, early marriage, child recruitment, and trafficking in person across its operations.

For Mazou, these challenges point to a need to center protection in efforts to address food security by governments and NGOs.

Special attention must also be paid to the specific plights of women and girls, he argued. In searching for food, displaced women and girls are at an increased risk of sexual violence, intimate partner violence, and child and forced marriages.

In Somalian regions affected by drought, gender-based violence has gone up 200 percent since 2021, Mazaou noted. He pointed to several factors that may lead to violence when a community is facing food insecurity.

“Food insecurity increases the risk of violence, neglect and exploitation and abuse of children. Girls may drop out of school at a higher percentage rate than boys when families are unable to afford school fees for all their children. Household sent children in search of food work on pasture for livestock exposing them to increased risks.”

The food crisis is also affecting the ability of host countries to provide for refugees.

Ethiopia, the third largest refugee-hosting country in Africa, is on the brink of famine. The country is reckoning with the historic drought hitting the Horn of Africa region, which is severely threatening its food networks.

Yoseph Kassaye, Deputy Permanent Representative of Ethiopia to the UN, underscored the crisis and its strain on the nation’s ability to protect refugees.

The drought has wiped away important nutrition sources that refugees rely on, such as cattle and water wells. Kassaye explained that the lack of natural resources means refugees can only rely on humanitarian assistance.

Yet, this is also at risk. As a result of funding constraints, in June, the WFP had to reduce its rations for refugees in Ethiopia by 50 percent.

“It is indeed troubling to learn that the level of support by international humanitarian agencies is reported to have decreased due to the funding shortages. In our view, urgent measures are needed if we’re to respond to the people in need of assistance in a timely and effective manner,” Kassaye said.

Citing related statistics, Guarnieri emphasized the importance of more humanitarian aid. But, she also underscored initiatives that increased the capacity of refugee populations and host countries.

“We have to do everything as WFP and UNHCR, as an international community to meet these urgent food needs and these desperate protection needs, but we’re never going to be able to catch up with the situation unless we are also investing in building the resilience in supporting the livelihoods and strengthening the self-reliance of populations who have forcibly displaced population who are seeking refuge in other countries.”

She also stressed the power of collaboration across sectors. One example of this was the WFP-UNHCR’s Joint Hub, a collaboration between agencies and governments to support refugees through innovative solutions and policies.

Established in 2020, the hub has worked on several projects. One with the Government of Mauritania resulted in Malian refugees being included in its national social protection plan—making refugees eligible for cash transfer funds for vulnerable households.

Dorte Verner, the lead agricultural economist in the Agricultural and Food Global Practice with the World Bank, brought up another innovative solution to boost food production: insect farming.

According to Verner, insect farming has enormous potential for tackling food insecurity in vulnerable communities as it requires no arable land and very little water and will not lead to any biodiversity loss. These characteristics mean it can even be practiced in refugee camps, Verner stated.

“Insert farming can provide displaced people with the skills that they need to produce where they are, and they can take these skills to human capital with them to where they go afterward. [It] can contribute to alleviating the world’s food and nutrition insecurity for forcibly displaced people and the host community.”

Closing the meeting, participants coalesced around the need to leverage the commitments being made to meaningfully tackle food insecurity.

Several participants also noted the opportunity to continue the conversation at the Security Council meeting to be held later that afternoon, where more concrete action on food insecurity could be examined.

A representative from Ireland stated that overall action from the Security Council was needed to meaningfully tackle the issue at its core.

He called for the Security Council to address the matter further.

“[The humanitarian] part of the UN system is playing its part, but the UN Security Council needs to play its part as well. That means responding early when we see the signs of crises coming, but it also means responding, particularly to protect civilians, and crises and meeting to make sure that things are put at the center of our response.”