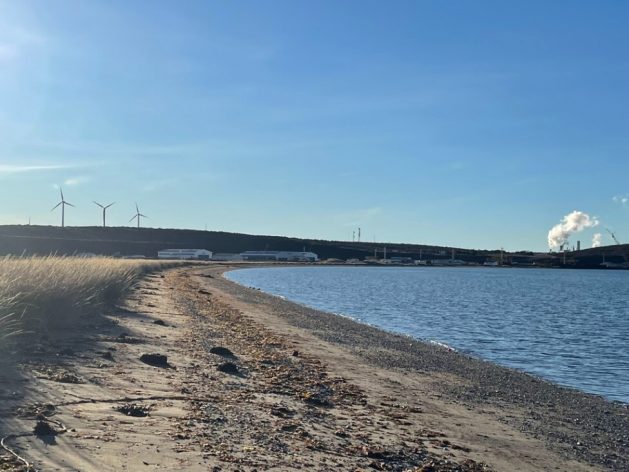 The administration of President Gabriel Boric, a self-described environmentalist, is facing a growing rift between scientists, social leaders and energy companies that have differences with regard to the production of green hydrogen in Magallanes. The first wind turbines have already been installed in the Magallanes region, in the far south of Chile, such as these in Laredo Bay, east of Cabo Negro, where companies are pushing green hydrogen projects in a scenario where environmental costs are beginning to take center stage. CREDIT: Courtesy of Erika Mutschke

SANTIAGO, Oct 12 2022 (IPS) - In Magallanes, Chile’s southernmost region, doubts and questions are being raised about the environmental impact of turning this area into the world’s leading producer of green hydrogen.

"The scale of production creates uncertainties, heightened because there is no baseline. The question is whether Chile currently has the capacity to carry out large-scale green hydrogen projects.” -- Jorge Gibbons

This long narrow South American country of 19.5 million people sandwiched between the Andes Mountains and the Pacific Ocean has enormous solar and wind energy potential in its Atacama Desert and southern pampas grasslands. This has led to a steady increase in electricity generation from clean and renewable sources.

In 2013, only six percent of the country’s total electricity generation came from non-conventional renewable sources (NCREs) – a proportion that climbed to 32 percent this year. Installed NCRE capacity in September reached 13,405 MW, representing 40.7 percent of the total. Of the NCREs, solar energy represents 23.5 percent and wind power 12.6 percent.

In Chile, NCREs are defined as wind, small hydropower plants )up to 20 MW), biomass, biogas, geothermal, solar and ocean energy.

According to the authorities, the wind potential of Magallanes could meet 13 percent of the world’s demand for green hydrogen, with a potential of 126 GW.

Green hydrogen is generated by low-emission renewable energies in the electrolysis of water (H2O) by breaking down the molecules into oxygen (O2) and hydrogen (H2). It currently accounts for less than one percent of the world’s energy.

However, it is projected as the energy source with the most promising future to advance towards the decarbonization of the economy and the replacement of hydrocarbons, due to its potential in electricity-intensive industries, such as steel and cement, or in air and maritime transportation.

The National Green Hydrogen Strategy, launched in November 2021 by the second government of then right-wing President Sebastián Piñera (2018-2022), seeks to increase carbon neutrality, decrease Chile’s dependence on oil and turn this country into an energy exporter.

The government of his successor, leftist President Gabriel Boric, in office since March, created an Interministerial Council of the Green Hydrogen Industry Development Committee, with the participation of eight cabinet ministers.

A spokesperson from the Ministry of Energy told IPS that “this committee has agreed to bring forward, from 2025 to 2022, the update of the National Green Hydrogen Strategy and the new schedule for the allocation of state-owned land for these projects.”

“We will promote green hydrogen in a cross-cutting manner, with an emphasis on harmonious, fair and balanced local development. By bringing forward the update of the strategy, we seek to generate certainty for investors and to begin to create the necessary regulatory framework for the growth of this industry in our country,” he said. 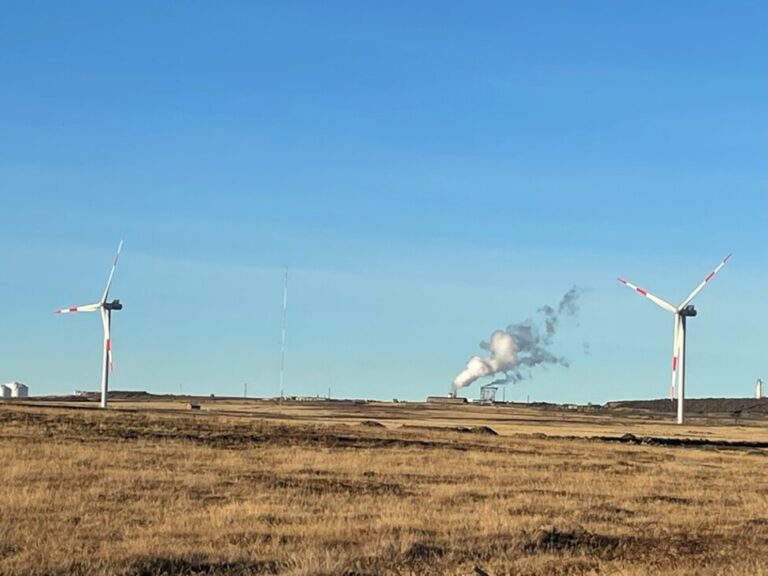 In the area known as Cabo Negro, in the Chilean region of Magallanes, several companies have installed wind turbines to generate wind energy. The installation of thousands of turbines will affect the landscape of Magallanes and environmentalists believe it will impact many birds that migrate annually to this southern region. CREDIT: Courtesy of Erika Mutschke

In a letter to the president, more than 80 environmentalists warned of the risk of turning “Magallanes y La Antarctica Chilena” – the region’s official name – into an environmental sacrifice zone for the development of green hydrogen.

“The energy transition cannot mean the sacrifice of migratory routes of birds that are in danger of extinction, otherwise it would not be a fair or sustainable transition,” said the letter, which has not yet received a formal response.

Environmentalists argue that the impact is not restricted to birds, but also affects whales that breed there, due to the effects of desalination plants, large ports and harbors.

Carmen Espoz, dean of science at the Santo Tomás University, who signed the letter, told IPS that “the main warning that we have tried to raise with the government, and with some of the companies with which we have spoken, is that there is a need for zoning or land-use planning, which does not exist to date, and for independent, quality baseline information for decision-making” on the issue.

Espoz, who also heads the Bahía Lomas Center in Magallanes, based in Punta Arenas, the regional capital, clarified that they are not opposed to the production of green hydrogen but demand that it be done right.

It is urgently necessary, she said in an interview in Santiago, to “stop making decisions at the central level without consultation or real participation of the local communities and to generate the necessary technical information base.”

The signatories asked Boric to create a Regional Land Use Plan with Strategic Environmental Assessment to avoid unregulated development of projects.

“We are not only talking about birds, but also about profound social, cultural and environmental impacts,” said Espoz, who argued that the model promoted by the government and green hydrogen developers “does not have a social license to implement it.” 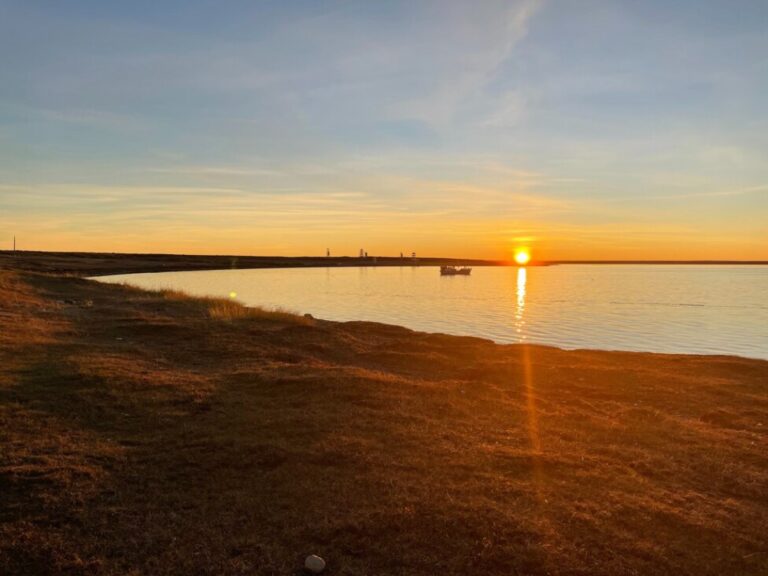 Sunset at Laredo Bay in the Magallanes region where the Chilean government will have to decide on what changes in the grasslands are acceptable, in the face of a flood of requests to use the area for largescale green hydrogen projects. CREDIT: Courtesy of Erika Mutschke

Prior to this letter to Boric, the international scientific journal Science published a study by Chilean scientists warning about potential impacts of wind turbines on the 40 to 60 species of migratory birds that visit Magallanes.

“It is estimated that the installation of wind turbines along the migratory paths of birds could affect migratory shorebird populations, which is especially critical in the cases of the Red Knot (Calidris canutus rufa) and the Magellanic Plover (Pluvianellus socialis),” said Espoz.

She added that if 13 percent of the world’s green hydrogen is to be generated in southern Chile, some 2,900 wind turbines will have to be installed by 2027, “which could cause between 1,740 and 5,220 collisions with bird per year.”

Jorge Gibbons, a marine biologist at the University of Magallanes, based in Punta Arenas, said the big problem is that Magallanes does not have a baseline for environmental issues.

“The scale of production creates uncertainties, heightened because there is no baseline. The question is whether Chile currently has the capacity to carry out large-scale green hydrogen projects,” he told IPS from the capital of Magallanes.

“The greatest risks to dolphins will be seen in the Strait of Magellan. I am talking about Commerson’s Dolphins (Cephalorhynchus commersonii), which are only found there in Chile and whose population is relatively small,” he said.

He proposed studying the route to ports and harbors of these species and to analyze how they breed and feed.

“The issue is how noise disturbs them or interrupts their routes. These questions are still unanswered, but we know some things because it is the best censused species in Chile,” he explained.

According to Gibbons, the letter to Boric is timely and will help reduce uncertainty because “the process is just beginning and the scientific and local community are now wondering if the plan will be well done.”

The partnership between HIF Chile and Enel Green Power Chile withdrew from the Environmental Evaluation System the study of the Faro del Sur Wind Farm project, involving an investment of 500 million dollars for the installation of 65 three-blade wind turbines on 3,791 hectares of land in Magallanes.

The study was presented in early August with the announcement that it was “a decisive step for the future of green hydrogen-based eFuels.”

But on Oct. 6, its withdrawal was announced after a series of observations were issued by the Magallanes regional Secretariat of the Environment.

“The observations of some public bodies in the evaluation process of this wind farm exceed the usual standards,” the consortium formed by the Chilean company HIF and the subsidiary of the Italian transnational Enel claimed in a statement.

The companies argued that “the authorities must provide clear guidelines to the companies on the expectations for regional development, safeguarding the communities and the environment.

“In light of these exceptional requirements, it is necessary to understand which requirements can be incorporated and which definitely make projects of this type unfeasible in the region,” they complained.

The government reacted by stating that it is important to remember that Faro del Sur is the first green hydrogen project submitted to the environmental assessment process in Magallanes.

“During the process, some evaluating entities made observations on the project, so the owners decided to withdraw it early, which does not prevent them from reintroducing it when they deem it convenient,” the Ministry of Energy spokesperson told IPS.

He added that the ministry stresses “the conviction to develop the green hydrogen industry in the country and that this means sending out signals, but in no case should this compromise environmental standards and citizen participation in the evaluation processes.”