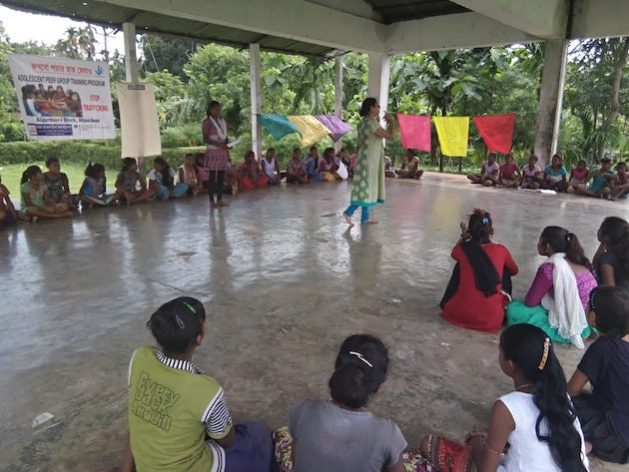 Pune, Oct 19 2022 (IPS) - Fourteen-year-old Priti Pyne was returning from school in Basra village in South 24 Parganas, West Bengal, when she and a friend came across a cold-drink seller selling an attractive-looking drink. The moment the girls sipped it, however, they felt dizzy. When they woke up, it was on a Delhi-bound train at Sealdah station in Kolkata. With the help of other passengers, the girls managed to get off the train.

“We had been briefed in school about how people traffic youngsters, and so we got in touch with the stationmaster and rang up the non-governmental organisation (NGO) – Goran Bose Gram Vikas Kendra – working in our village. The NGO office-bearers immediately came over and arranged for our return home.” However, her father, who works as a labourer in a bag factory, and her homemaker mother did not want to lodge an FIR (case), and she has not been able to access the compensation as a survivor of trafficking.

“I was a minor then; my parents took all decisions on my behalf. Now that I am an adult, it is too late to pursue it,” she laments.

Shelly Shome and Molina Guin from Bagda, both from North 24 Parganas, got entrapped by love affairs and ended up trafficked. Shelly’s trafficker took her to Malda and locked her up in an “intermediate” lodging for a week on the way to a brothel, where police rescued her.

Molina escaped on her own from a brothel in Nagpur (Maharashtra), where she had been sold, but she had spent six months there.

“Since I did not know any Hindi, it was difficult. Ultimately, some Bengali boys who lived nearby helped me return home.” Although FIRs were lodged in both cases, neither Shelly nor Molina could access the compensation due to them. Worse, the traffickers are yet to be caught.

Sunil Lahiri’s family were unable to repay a loan. So, his parents, uncle and siblings, who originally lived in Champa, had to seek employment in a brick kiln at Rohtak in Haryana. They were roped in by a labour contractor with big promises of good accommodation, pay and food. But once there, the family realised they had been trafficked, along with 20 other desperate neighbours in a similar situation. An adolescent then, Sunil had to work 12-14 hours a day and survive on meagre rations. No accommodation was provided, and they lived in a thatched hovel for shelter. Any attempt to escape was met with relentless torture and assault. After a couple of months, Sunil and his uncle made good their escape under cover of darkness to the nearest police station, from where they made their way home. However, in the absence of an appropriate FIR, he has not been able to claim the victim’s compensation.

Lalita lives in Erode in Tamil Nadu and found herself trafficked for labour to a garment factory in Coimbatore, in the same state, when she was around 15. But once there, she found herself trapped in a hostile environment with many others and had to labour for 14-16 hours a day without a break. Housed in dirty dormitories, the girls were administered tablets to stop their periods lest they demand time off, resulting in many medical problems. She ultimately excused herself one day and sneaked home by claiming the death of a relative. Since she lodged no FIR, Janaki has been deprived of compensation too.

Trafficking in India is generally for sexual exploitation and cheap labour.

The common thread that connects all victims of trafficking is poverty and lack of awareness. Poverty and unemployment drive people to migrate in search of work. Traffickers’ agents cash in on the plight of these individuals and whisk them away to be exploited for sex or cheap labour. This is often done across inter-state borders so escaping back home is difficult.

Victims of both kinds of trafficking are entitled to compensation, but different laws deal with individual crimes. While victims trafficked for sexual exploitation are primarily dealt with under the Immoral Trafficking (Prevention) Act of 1956, different laws deal with those trafficked for labour since they may be subject to bonded labour. In India, bonded labour had long been prohibited by the Constitution, but laws specific to it, such as the Bonded Labour System (Abolition) Act, 1976, the Contract Labour ( Regulation and Abolition) Act, 1970, and the Migrant Workmen (Regulation of Employment and Conditions of Service) Act, 1979 are comparatively recent.

In India, compensation was initially meant only for victims of motor accidents. It was only in 2008 that the Supreme Court modified Section 357 A of the Criminal Procedure Code ( CrPC) to compensate victims of criminal offences.

While Sec 357A (1) provides for compensation to be given to either the victim or their legal heirs, Sec 357A (2) and 357 A (3) deal with the granting of compensation and its quantum by the District legal services authority (DLSA), and the District or Trial courts’ and Sec 357A (4) deals with the right to compensation for damages suffered by the victim before identification of the culprit and the starting of court proceedings.

Following these directions of the Supreme Court, all Indian states came up with schemes to compensate victims of crimes such as acid attacks, rape, and the like.

In 2010, as per the recommendations of the United Nations Office for Drugs and Crime (UNODC), the government provided for the setting up of Anti-Human Trafficking Units (AHTUs) in all states of the country to investigate and address trafficking. In 2013, in a related development, Section 370 of the Indian Penal Code ( IPC) was amended by widening its scope to include all sexual and physical exploitation forms.

Why Victims Are Denied Compensation

Despite all these measures, victims seldom get access to compensation. This is because claiming compensation depends on filing FIRs, as advocate Kaushik Gupta points out. Lack of sensitisation and training often prevents the police from filing FIRs that clearly state whether a victim is trafficked or not. This limits avenues for compensation.

Another reason is that victims are ignorant of the law or fear stigma, preventing them from pursuing compensation. Worse, the paperwork involved may be overwhelming, getting victims and their guardians to step away.

Although a victim or their legal guardian, as per law, can file an FIR anywhere, that is, either where they are rescued or once the victim reaches home, filing the FIR later can pose a problem. Activist Baitali Ganguly, who heads the NGO Jabala Action Research Organisation, points out, “If the FIR is filed on reaching home, it is difficult to prove that a person is a victim/survivor of trafficking. Proof of having been trafficked is an important factor when claiming victim compensation.”

When a trafficked person is not rescued but escapes surreptitiously, filing the FIR may be scary since an organised mafia is involved. Moreover, with the rate of conviction being as low as 16 percent in 2021 (as per statistics furnished by the National Crime Records Bureau), victims remain in mortal fear for their lives and fear registering FIRs.

The Anti-Human Trafficking Units (AHTUs) have failed to deliver in most cases. A study conducted by the NGO, Sanjog as part of its Tafteesh Project found that Anti-Human Trafficking Units (AHTUs) were non-operational in many districts in India. In several states, the composition of AHTUs did not follow the mandatory mix of legal professionals, doctors, and police officials. Even when functional, cases of trafficking were not handed over to them for investigation.

The problem, activists opine, “is that victim compensation is lowest in terms of priority for the authorities. Moreover, with no dedicated fund to compensate victims of trafficking, money often falls short.” At times “the money is sanctioned but does not reach the victim’s bank account for months on end,” Suresh Kumar, who heads the NGO Centre Direct, points out.

The Long Road to Rehabilitation

Getting compensated, though, is not enough. Baitali Ganguly tells me, “We helped some survivors claim compensation. But they were in no mental state to embark on entrepreneurial ventures. Psycho-social help is what they largely need to begin life anew. Hence, we have been imparting their skills and helping them get employed as security guards, housekeepers and the like.”

Psychologist and researcher Pompi Banerjee also stresses the need for counselling and medical assistance for survivors for thorough rehabilitation.

Taking all these aspects into account, the National Legal Services Authority (NALSA) drew a draft bill for a comprehensive law to check human trafficking. With necessary amendments as of today, the Trafficking of Persons (Prevention, Care and Rehabilitation) Bill, 2021, is the first attempt at victim-oriented legislation, and makes provision for forfeiture, confiscation, and attachment of property of traffickers, witness protection and guaranteed compensation for victims out of the property of traffickers.

It also provides interim relief to survivors, for stringent punishment to traffickers extending up to life imprisonment, and in the case of repeat offences, even death. The Bill also provides a dedicated rehabilitation fund for survivors of trafficking.

However, survivors of trafficking who have grouped themselves under the Indian Leadership Forum Against Trafficking (ILFAT) are unhappy about rehabilitating victims through “protection homes”, which they see as nothing better than prisons.

Instead, they feel “community-based rehabilitation wherein job-oriented skills are imparted” is needed. Survivor Sunil Lahiri, who is now studying, and conducting awareness sessions in schools for Tafteesh/Sanjog, stresses the need to register and regulate placement agencies. “People in our villages have to migrate without employment opportunities. The authorities must ensure that they do not get exploited.”

Survivors also feel the need for fast-track courts to handle cases of trafficking so that justice is swift.

Although passed by the Lower House of India’s Parliament, the Trafficking of Persons (Prevention, Care & Rehabilitation) Bill 2021 awaits the nod of the Upper House to become an Act. One hopes that further improvements will be incorporated before the Bill is passed into law. A well-drafted law can well prove the first step in wiping out human trafficking altogether in India.