World Food Day is celebrated on October 16, 2022, with the theme Leave NO ONE behind. During this week IPS will look at features that showcase better production, better nutrition, a better environment, and a better life. 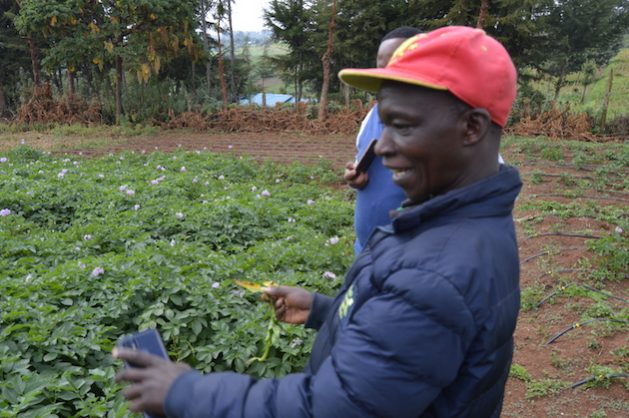 Richard Mbaria makes a point at his potato in Kapsita village of Nakuru County, Kenya. The farmer has increased his production per acre thanks to training by a CARP+ project implemented in the area by Egerton University. Credit: Maina Waruru/IPS

Nairobi, Oct 11 2022 (IPS) - Until a few years ago, Kenyan potato farmer Richard Mbaria used to harvest just four tonnes of the crop from an acre of land thanks to poor quality seeds, combined with an attack on the crop by pests and diseases.

The middle-aged farmer would select seeds from his previous harvest, picking the smallest tubers that could not fetch good prices in the market. This was the practice every other smallholder farmer in his Kapsita village in Elburgon, Nakuru County in Kenya’s Rift Valley region and beyond would do too. The reason is that many rarely afford certified seeds, and those who could were unaware of the importance of using approved seeds.

“That was then and today, but today I get an average of nearly 8 tonnes of the produce from an acre of land and want to improve the harvests to 10 to 12 tonnes from the same land in the near future,” Mbaria proudly discloses.

The father of four did not transform his farming miraculously. He has been trained in better management of crops and also on the selection and preservation of healthy planting seeds, which he is now selling to local farmers.

Even more radical transformation has happened to his farming. He’s now on the journey to becoming qualified to produce certified tissue culture planting material, thanks to the training he has received from Egerton University’s Enhancing Access to High Quality Seed Potato for Improved Productivity and Income of Smallholder Farmers in Nakuru County (HQSPIPI), implemented under the Community Action Research Programme (CARP+).

Tissue culture is the cultivation of plant tissues or organs in specially formulated nutrient solution in a lab or a controlled environment using mainly sprouts or tissue-like leaves, which are grown in a medium with nutrients and disease-killing chemicals. This way, an entire plant is regenerated from a single tissue.

This is done in a controlled environment – usually in a lab or a greenhouse to produce plantlets, also known as apical root cuttings and mini tubers (tiny-sized potato seeds), but which are clean and free of disease, explains Professor Anthony Kibe, Associate Professor of Agronomy at Egerton University.

When transplanted in the field, the result is seed potatoes which can be sold to farmers for high productivity and at relatively affordable prices.

The resulting plantlet or its small tubers at the bottom of the roots can be transplanted in the fields. The crop is usually high-yield and also free of disease when properly managed.

The technique, he says, is critical in the production of disease-free and high-yielding fruits and vegetables and is widely used in bananas in East Africa. In potatoes, it is mainly practiced by large commercial farms, seed companies, and government research institutions due to the costs and complexity for an ordinary farmer.

The implication is that certified seeds are relatively expensive and out of reach of most of the nearly 1 million smallholder farmers engaged in potato farming in Kenya.

The programme is one of the activities under Transforming African Agricultural Universities to meaningfully contribute to Africa’s growth and development (TAGDev), an initiative by Uganda-based Regional Universities Forum for Capacity Building in Agriculture (RUFORUM), in partnership with the MasterCard Foundation.

One of its aims is to train farmers to plant quality seeds, test their soils, effectively manage diseases and pests, among others, for increased productivity, and organize them in marketing cooperatives for higher incomes, explains Kibe.

“About ten years ago, the average yield for potatoes per hectare in Kenya was 22.5 tonnes; today, it has dropped to around seven tonnes a hectare due to, among others, the transmission of diseases through seeds,” he adds.

It is a concern that his farmers’ outreach project has been addressing by offering free advice, addressing the major constraints to the production of the critical food crop.

“One way of addressing the problem is by training a number of farmers to become producers of disease-free seeds for sale to their colleagues for increased yields and higher income,” he says. Sadly, he notes, only about 2% of Kenyan farmers who grow potatoes use certified seeds, compromising yields.

“This is in stark contrast with leading world producers such as the Netherlands producer, where 99% of farmers use certified seeds,” Kibe explains.

In Kenya, average yields are around 10 tonnes per hectare, while the crop’s potential is as high as 30 tonnes for the size. The lack of quality disease-free seeds of improved varieties is a major cause of this yield gap. This is in contrast to countries like Egypt and South Africa, where yields stand at 40 tonnes per hectare, he told IPS.

“The planting material many farmers use each season for a new crop is produced, stored, and traded by farmers without regulation,” says Kibe.

Farmers select the seeds from their previous harvest. Part of the challenge is that only a few privately-owned farms and a handful of state-owned seed enterprises produce certified seed potatoes.

Where new varieties have been produced and propagated under the technology, yields have been as high as 30 tons per hectare.

Potato, he notes, has been a low-priority food crop in Kenya’s research agricultural research system, despite its importance as a staple food and its potential contribution to the country’s food security.

Under his project, nearly 5,000 farmers have been reached and trained on good husbandry for higher yields since 2017.

Of the three roles bestowed on universities – teaching, research, and outreach, the latter has been the least applied, with universities doing research with the expectation that the extension arms in government would do the knowledge transfer, says Anthony Egeru, who heads TAGDeV project at RUFORUM.

“However, the universities need to have visibility and prove relevant to communities in which they operate and assert their roles as facilitators of development,” he says.

Under the initiative, farmers such as Mbaria are reached by the universities and benefit from the knowledge in their possession, which largely remains stored in journal publications. On their side, universities fulfill their obligation of giving back to society.

While hydroponics is a technology out of reach of many growers, it is essential for the fast multiplication of seeds, according to Michael Cherutich, a potato expert at Kenya’s Agriculture Development Corporation.

The seed producers, including the state corporation, can hardly meet the demand for certified seeds. One way of ensuring affordability has many seed producers in the villages in potato farming areas.