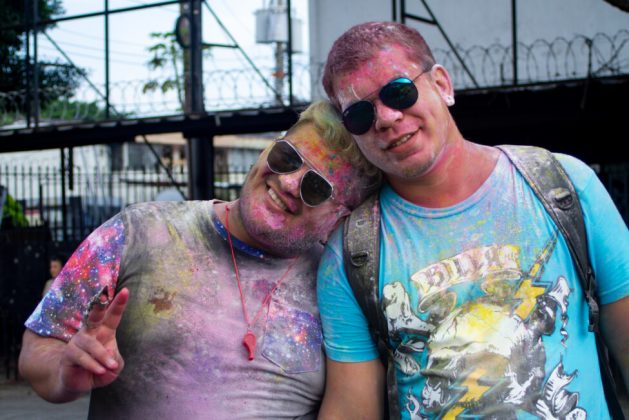 A couple participate in the gay pride parade in San Salvador, held before the state of emergency was declared on Mar. 27, under which the government is carrying out massive raids in search of suspected gang members. Members of the LGBTI community are among those arbitrarily detained, victims of police homophobia and transphobia. CREDIT: Edgardo Ayala/IPS

SAN SALVADOR, Nov 21 2022 (IPS) - Police raids against gang members in El Salvador, under a state of emergency in which some civil rights have been suspended, have also affected members of the LGBTI community, and everything points to arrests motivated by hatred of their sexual identity.

Personal accounts gathered by IPS revealed that some of the arrests were characterized by an attitude of hatred towards gays and especially transsexuals on the part of police officers.

"Cases like this, which reveal hatred towards gay or trans people, are happening, but the organizations are not really speaking out, because of the fear that has been generated by the ‘state of exception’.” -- Cultura Trans

“Cases like this, which reveal hatred towards gay or trans people, are happening, but the organizations are not really speaking out, because of the fear that has been generated by the ‘state of exception’,” an activist with Cultura Trans, a San Salvador-based organization of the LGBTI (lesbian, gay, bisexual, trans and intersex) community, told IPS.

Hatred of homosexuals and transgender people

The activist, who asked to remain anonymous, said that another member of his organization, a gay man known as Carlos, has been detained since Jul. 13, after he complained about the arrest two months earlier of his sister Alessandra, a trans teenager.

The authorities have accused them of “illicit association,” the charge used to arrest alleged gang members or collaborators, under the state of emergency.

“The case against Carlos was staged, it was invented,” said the source. “He is a human rights activist in the trans community, we have documents that show that he participates in our workshops, in our activities.” 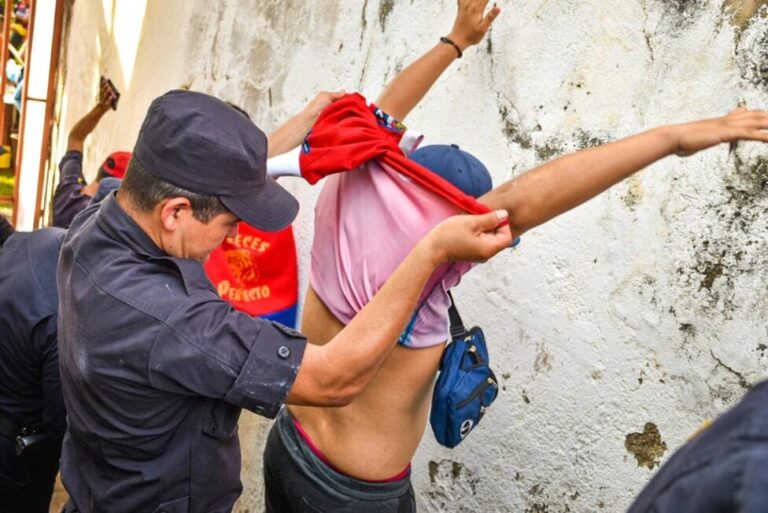 A police officer stops a young man in San Salvador and checks his back and other parts of his body for gang-related tattoos, one of the elements used by authorities to track down gang members in El Salvador. Since the state of emergency was declared, 58,000 people have been detained, in many cases arbitrarily, among them members of the LGBTI community. CREDIT: National Civil Police

The state of exception, under which some civil rights are suspended, has been in force in El Salvador since Mar. 27, when the government of Nayib Bukele launched a crusade against criminal gangs, with the backing of the legislature, which is controlled by the ruling New Ideas party.

Gangs have been responsible for the majority of crimes committed in this Central American country for decades.

According to the constitution, a state of exception can be in place for 30 days, and can be extended for another 30. But a legal loophole has allowed the government and Congress to renew the measure every month, under the argument that this was already done during the 1980-1992 civil war.

This interpretation could only be modified by the Constitutional Chamber of the Supreme Court of Justice. But Bukele, with the backing of the legislature, named five hand-picked magistrates to that chamber in May 2021, in what his critics say marked the beginning of a shift towards authoritarianism, two years into his term.

Since Mar. 27, the police and military have imprisoned some 58,000 people.

In most cases no arrest warrants were issued by a judge, and the arrests are generally based on gang members’ police files.

In addition, anonymous tips by the public to a hotline set up by the government have gradually expanded the number of people arrested.

“The state of emergency exposes you to an inefficient prosecutor, incapable of investigating and linking people to crimes,” William Hernández, director of Entre Amigos, an LGBTI organization founded in 1994, told IPS.

He added: “If a police officer decides to detain someone and make a report of the arrest, they go out to look for them, but there’s no record of who reported that individual, where the information came from, and no one knows who investigated them.”

Among the 58,000 detainees are some 40 people from the LGBTI community, according to a report made public in October by Cristosal and other human rights organizations that monitor abuses committed by the Salvadoran authorities under the state of exception.

These organizations have collected some 4,000 complaints of arbitrary detentions and other abuses, including torture, committed against detainees. Some 80 people have died in police custody and in prison. 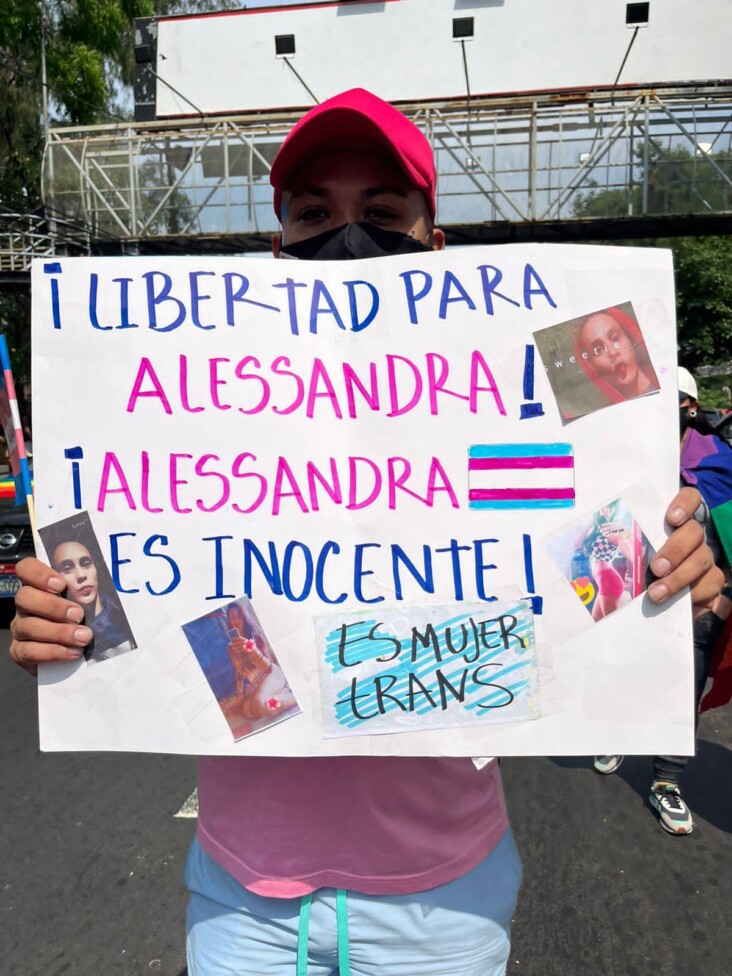 Carlos is a gay man who spoke out against the arrest of his younger sister Alessandra, a trans woman seized in May by Salvadoran police, accused of belonging to a gang. In July he was also arrested and so far little is known about their situation, under the state of emergency in El Salvador, which has led to the imprisonment of 58,000 people. CREDIT: Courtesy of Cultura Trans

In the case of Carlos, 32, and his sister Alessandra, 18, the information available is that she was arrested in May in one of the police sweeps, in a poor neighborhood in the north of San Salvador.

She was arrested for not having a personal identity card. She had recently turned 18, the age of majority, and she should have obtained the document, which is needed for any kind of official procedure.

The police officers who arrested Alessandra told her mother that she was only being taken for 72 hours, while the situation was clarified.

However, something that could have been easily investigated and resolved turned into an ordeal for her and her family, especially her mother, who was facing several health ailments, said the Cultura Trans activist.

“She was in the ‘bartolinas’ (dungeons) of the Zacamil (a police station in that poor neighborhood),” the source said. “We went to leave food for her, then they sent her to the Mariona prison. We realized that she had been beaten and sexually abused, because she was being held in a men’s facility.”

He added: “When they took Alessandra, her mother told us that the police told the girl ‘culero, we are going to take you to be raped, to be f**ked,’ which is what actually did happen. ‘We’re going to take you so that you learn not to dress like a woman’.”

Culero is a pejorative term used in El Salvador against gays.

Meanwhile, her brother Carlos spoke out against Alessandra’s arrest, during activities carried out by the LGBTI community.

In May, in a march against “homo-lesbo-transphobia” – hatred of gays, lesbians and trans people – he carried several handmade signs calling for his sister’s release from prison.

The authorities visited Carlos’ house, and threatened to arrest him as well, which they did on Jul. 13.

According to the source, the police and prosecutors put together a case and accused him of illicit association. They are asking for a 20-year prison sentence.

“It’s not because of illicit association, we know that very well. It’s because he’s a human rights activist in the LGBTI community, and because he has been demanding the release of his sister,” said the Cultura Trans activist.

“We want him back with us, and his sister too,” he said. 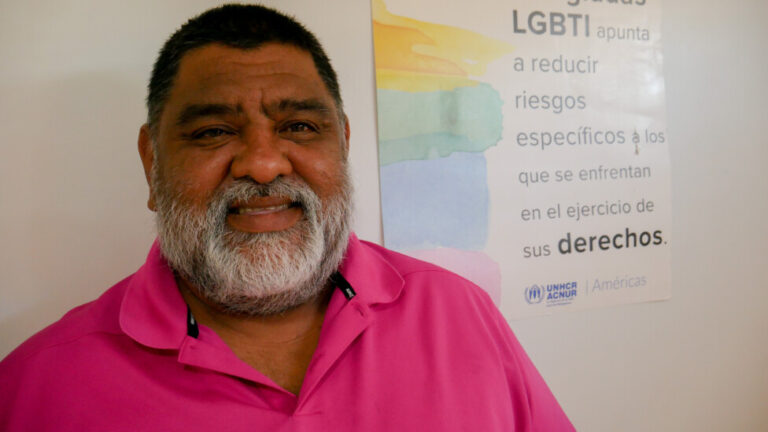 William Hernández, director of the association Entre Amigos, said that the police and the Attorney General’s Office stage raids against alleged gang members without carrying out proper investigations to substantiate the arrests or to release detainees if they are innocent. The Salvadoran government has been on a crusade against gangs since March, but in the process there have been numerous abuses and illegal detentions, according to human rights organizations. CREDIT: Edgardo Ayala/IPS

According to reports by the NGOs, while the 40 people from the LGBTI community who have been detained represent a small proportion of the total number of people arrested, there could be an underreporting of undocumented cases, especially in rural areas.

“In this country, although it’s small, there may be cases in remote places involving people who have never contacted an NGO. These are cases that remain invisible,” Catalina Ayala, a trans woman activist with Diké, an LGBTI organization whose name refers to justice in Greek mythology, told IPS.

Ayala said that, although she has not personally experienced transphobia from the authorities on the streets of San Salvador, and her organization has not received concrete reports of cases like Alessandra’s, she did not rule out that they could be happening.

“I think it’s a positive thing that the authorities are arresting gang members, but not people who have nothing to do with crime, or just because they are LGBTI,” she said.

The organization’s lawyer, Jenifer Fernández, said Diké has provided legal assistance to 12 people from the LGBTI community who have been detained, mainly because they were not carrying their identity documents.

In one of the cases, the police said things that could be construed as transphobic, although there was also a basic suspicion, since she was a trans woman without an identity document.

“She was a 25-year-old woman who had never had a DUI, an identity document, because she suffered from gender dysphoria and was afraid to go to register, afraid of being asked to cut her hair or to remove her make-up,” said Fernández.

Gender dysphoria is a sense of unease caused by a mismatch between their biological sex and their gender identity and has repercussions on their ability to function socially.

“The arrest report said that she was a gang member disguised as a woman, that they did not know who she was, that she gave a name but that it could not be proven without a DUI,” the lawyer explained.

But Fernández added that, in general, with or without a state of exception, trans women suffer the most from harassment, mockery and aggression.

Of the 12 cases, 11 of the individuals were released, and only one remains in custody because, according to the police, there is evidence that the person may have had ties to a gang, although the details of that evidence are unknown.

On Nov. 11, the Inter-American Commission on Human Rights (IACHR) expressed concern over “the persistence of massive and allegedly arbitrary arrests” by Salvadoran authorities under the state of emergency.

It also reported non-compliance with judicial guarantees, and called on the government “to implement citizen security actions that guarantee the rights and freedoms established in the American Convention on Human Rights and in line with Inter-American standards.”

Among the constitutional rights suspended since the beginning of the state of emergency on Mar. 27 are the rights of association and assembly, although the government says this only applies to criminal groups meeting to plan crimes.

It also restricts the right to a defense and extends the period in which a person can be detained and presented in court, which Salvadoran law sets at a maximum of three days.

On Nov. 16, Congress, which is controlled by the governing party, approved a new extension of the state of emergency, which it has done at the end of each month.

New Ideas lawmakers have said that the restriction of civil rights will be extended as long as necessary, “until the last gang member is arrested.”

Bukele’s party holds 56 seats in the 84-member legislature, and thanks to three allied parties they have a total of 60 votes, which gives them a large absolute majority.