BANGKOK, Thailand, Nov 29 2022 (IPS) - The recent climate talks in Egypt have left us with a sobering reality: The window for maintaining global warming to 1.5 degrees is closing fast and what is on the table currently is insufficient to avert some of the worst potential effects of climate change. The Nationally Determined Contribution targets of Asian and Pacific countries will result in a 16 per cent increase in greenhouse gas emissions by 2030 from the 2010 levels. 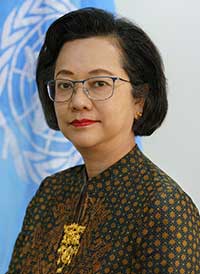 The Sharm-el Sheikh Implementation Plan and the package of decisions taken at COP27 are a reaffirmation of actions that could deliver the net-zero resilient world our countries aspire to. The historic decision to establish a Loss and Damage Fund is an important step towards climate justice and building trust among countries.

But they are not enough to help us arrive at a better future without, what the UN Secretary General calls, a “giant leap on climate ambition”. Carbon neutrality needs to at the heart of national development strategies and reflected in public and private investment decisions. And it needs to cascade down to the sustainable pathways in each sector of the economy.

At the Economic and Social Commission for Asia and the Pacific (ESCAP), we are working with regional and national stakeholders on these transformational pathways. Moving away from the brown economy is imperative, not only because emissions are rising but also because dependence on fossil fuels has left economies struggling with price volatility and energy insecurity.

A clear road map is the needed springboard for an inclusive and just energy transition. We have been working with countries to develop scenarios for such a shift through National Roadmaps, demonstrating that a different energy future is possible and viable with the political will and sincere commitment to action of the public and private sectors.

The changeover to renewables also requires concurrent improvements in grid infrastructure, especially cross-border grids. The Regional Road Map on Power System Connectivity provides us the platform to work with member States toward an interconnected grid, including through the development of the necessary regulatory frameworks for to integrate power systems and mobilize investments in grid infrastructure. The future of energy security will be determined by the ability to develop green grids and trade renewable-generated electricity across our borders.

The move to net-zero carbon will not be complete without greening the transport sector. In Asia and the Pacific transport is primarily powered by fossil fuels and as a result accounted for 24 per cent of total carbon emissions by 2018.

Energy efficiency improvements and using more electric vehicles are the most effective measures to reduce carbon emissions by as much as 60 per cent in 2050 compared to 2005 levels. The Regional Action Programme for Sustainable Transport Development allows us to work with countries to implement and cooperate on priorities for low-carbon transport, including electric mobility. Our work with the Framework Agreement on Facilitation of Cross-border Paperless Trade also is helping to make commerce more efficient and climate-smart, a critical element for the transition in the energy and transport sectors.

Adapting to a riskier future

Even with mitigation measures in place, our economy and people will not be safe without a holistic risk management system. And it needs to be one that prevents communities from being blindsided by cascading climate disasters.

We are working with partners to deepen the understanding of such cascading risks and to help develop preparedness strategies for this new reality, such as the implementation of the ASEAN Regional Plan of Action for Adaptation to Drought.

Make finance available where it matters the most

Finance and investment are uniquely placed to propel the transitions needed. The past five years have seen thematic bonds in our region grow tenfold. Private finance is slowly aligning with climate needs. The new Loss and Damage Fund and its operation present new hopes for financing the most vulnerable. However, climate finance is not happening at the speed and scale needed. It needs to be accessible to developing economies in times of need.

Innovative financing instruments need to be developed and scaled up, from debt-for-climate swaps to SDG bonds, some of which ESCAP is helping to develop in the Pacific and in Cambodia. Growing momentum in the business sector will need to be sustained. The Asia-Pacific Green Deal for Business by the ESCAP Sustainable Business Network (ESBN) is important progress. We are also working with the High-level Climate Champions to bring climate-aligned investment opportunities closer to private financiers.

Climate actions in Asia and the Pacific matter for global success and well-being. The past two years has been a grim reminder that conflicts in one continent create hunger in another, and that emissions somewhere push sea levels higher everywhere. Never has our prosperity been more dependent on collective actions and cooperation.

Our countries are taking note. Member States meeting at the seventh session of the Committee on Environment and Development, which opens today (29 November) are seeking consensus on the regional cooperation needed and priorities for climate action such as oceans, ecosystem and air pollution. We hope that the momentum begun at COP27 and the Committee will be continued at the seventy-ninth session of the Commission as it will hone in on the accelerators for climate action.

In this era of heightened risks and shared prosperity, only regional, multilateral solidarity and genuine ambition that match with the new climate reality unfolding around us — along with bold climate action — are the only way to secure a future where the countries of Asia and the Pacific can prosper.