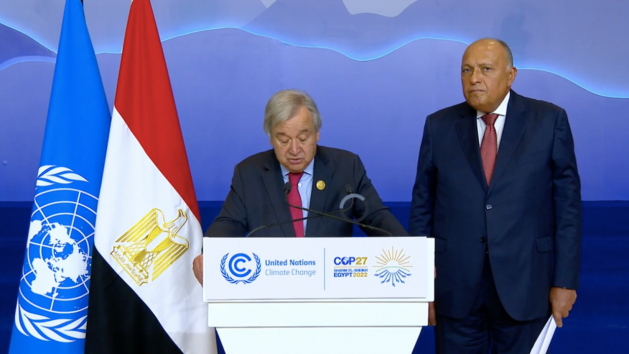 Sharm El-Sheikh, Nov 17 2022 (IPS) - UN Secretary-General António Guterres told the negotiators at COP27 that time for talking about loss, and damage finance is over.

“We need action. No one can deny the scale of loss and damage we see around the globe. The world is burning and drowning before our eyes. I urge all parties to show that they see it – and get it.”

He echoed the words of COP27 President Sameh Shoukry, who spoke about how emergent and developing countries had not reached an agreement on loss and damage – and urged the negotiators to put in extra efforts to reach agreements here.

Guterres said it was clear that there was a breakdown in trust between North and South.

This was no time for finger-pointing.

“The world is watching and has a simple message: stand and deliver. Deliver the kind of meaningful climate action that people and the planet so desperately need,” he said.

Global emissions were at their highest level and rising, and “climate impacts are decimating economies and societies – and growing.”

He said it was not possible to deny climate justice to those who contributed least to the climate crisis and are getting hurt the most.

He said the Just Energy Transition Partnerships were important pathways to accelerate the phasing out of coal and the scaling up of renewables – and should be expanded.

Guterres also said the parties should act on the crucial question of finance.

“That means delivery of the $100 billion in climate finance for developing countries.

It means clarity on how the doubling of adaptation finance will be delivered through a credible roadmap. And it means acting on the consensus to reform multilateral development banks and international financial institutions.”