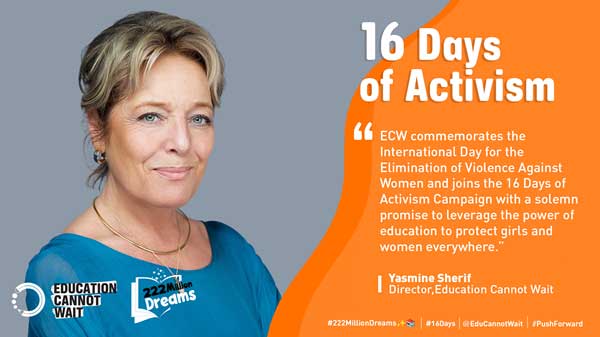 NEW YORK, Nov 25 2022 - As we now have entered the 21st century, we must end violence against girls and women. Attacking and abusing girls and women as a means of warfare, the war-machinery or domestic violence as a result of crisis, is absolutely abhorrent and unacceptable. Exposing half of the world’s population to the risks of violence because of their gender is not only a violation of international and domestic laws, but a disgraceful and brute breach of our very own humanity.

With our strategic partners across the globe, Education Cannot Wait commemorates the International Day for the Elimination of Violence Against Women and joins 16 Days of Activism Campaign with a solemn promise to leverage the power of education to protect girls and women everywhere from being disempowered and subjected to horrific attacks and fears thereof.

Worldwide, 222 million crisis-affected children and adolescents are in need of urgent education support. Barriers to girls’ education such as armed conflicts, forced displacement, the climate crisis, COVID-19 and other factors have left 129 million girls worldwide out of school.

In countries affected by fragility, conflict and violence, girls are 2.5 times more likely to be out of school than boys, and they are 90% more likely to be out of secondary school than those in non-conflict-impacted environments. Of deep concern is recent data indicating that approximately 60 million girls are sexually assaulted on their way to or at school every year.

Such abhorrent violence against girls is a travesty of all humankind.

The denial of education to girls in places like Afghanistan, the Democratic Republic of the Congo, Haiti, Yemen and beyond is in and of itself is an act of violence. It is a moral affront to our collective efforts to build a more equal world and realize the Sustainable Development Goals by 2030.

Education is our single best tool in our efforts to protect girls and women from violence. Safe and protective learning environments insulate girls from sexual assaults, childhood marriage, early pregnancy, forced labour and other senseless violations of their human rights.

To achieve this, we must get every girl – everywhere – into safe learning environments. We must provide physical protection, including safe passage to and from school. We must advocate for cultural shifts that embrace girls as equals and support access to education from early childhood straight through to the university. And we must advocate for legal protection and an end of impunity.

At ECW, we include protection for girls as a central component in all our investments supporting joint programming in the education sector. World leaders, and public and private sector donors everywhere will have an opportunity to contribute to end violence against girls and adolescent girls, showing their support for girls’ education – and the power it has to end violence against girls – by committing funding support at the Education Cannot Wait High-Level Financing Conference on 16-17 February 2023 in Geneva.

You can join us too, as we #OrangeTheWorld and help realize the #222MillionDreams of the world’s 222 million crisis-affected girls and boys with your individual donation. Together, we can and must end violence and protect the physical and mental rights of every girl, every student and every teacher. Yes, we can! 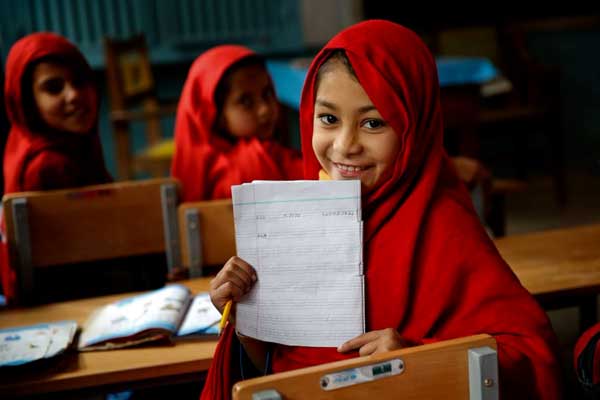