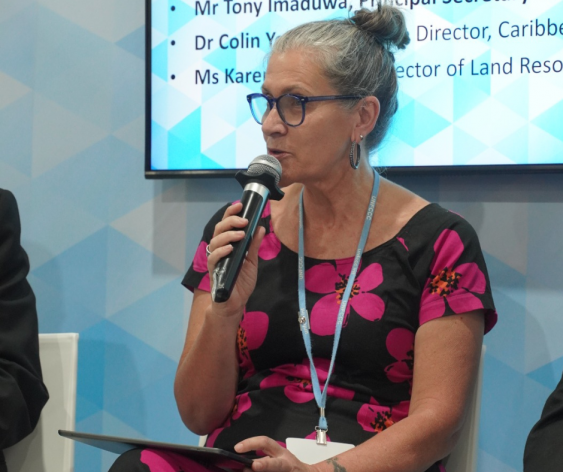 Karen Mapusua, SPC’s Director of the Land Resources Division, would like to see food high up on the loss and damage fund if it is agreed to. Credit Busani Bafana/IPS

SHARM EL SHEIKH, Nov 18 2022 (IPS) - Food is everything to the culture and identity of the Pacific island countries.

Climate change impacts of rising sea levels and higher temperatures threaten islanders’ food security, which is largely dependent on fisheries and subsistence agriculture. Almost 70 percent of islanders rely on agriculture for their livelihood.

Pacific island countries at the COP27 summit, taking place at Sharm El Sheikh in Egypt, say agriculture is high on their agenda, with parties to the UNFCCC calling for a decision to protect food security through the mobilisation of climate finance for adaptation. 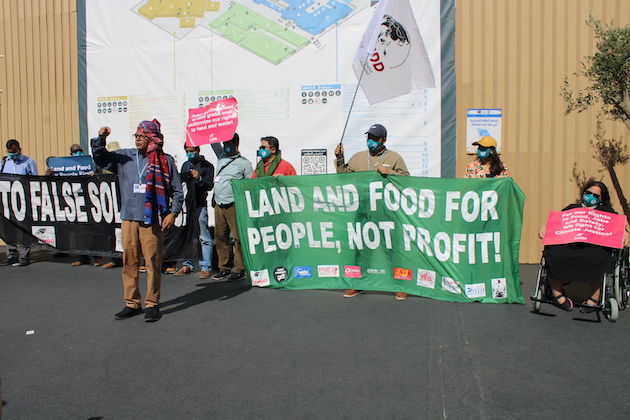 At the COP negotiations, agriculture features on many levels, including during discussions on the ongoing Koronivia Joint Work on Agriculture (KJWA) – a formal process established to highlight the potential of food and agriculture in tackling climate change. However, there has been no progress in countries making commitments to placing agriculture and food systems in the final text.

The agriculture sector accounts for 37% of global greenhouse gas (GHG) emissions, with land seen as a potential major carbon sink that can be considered for capturing emissions.

Could agriculture be off the menu?

“Not yet,” says Karen Mapusua, Pacific Community’s (SPC) Director of the Land Resources Division. “Unless the parties can come together and through their work demonstrate the value of the Koronivia work programme and a clear way forward for it, then that is a risk.”

She explains that it was critical to keep the Koronivia plan alive and secure a global strategy for agriculture and food systems to be considered solutions for climate change adaptation and mitigation.

“Agriculture contributes 30 percent of emissions, and everybody has to eat, and if we do not take this seriously, then we are in trouble,” said Mapusua, who is also the President of IFOAM Organics International, a global organisation specialising in changing agricultural practices.

Pacific countries are very low emitters of harmful carbon emissions – except for a few high-input industries like sugar production in Fiji and the commercial production of exotic horticulture for export.

“We are losing productive land to sea level rise, inundation and salination of soils near the coast,” she said. Farmers have experienced increased pests and diseases due to a change in temperatures and weather conditions. For example, the islands have been hit by an infestation of the coconut rhinoceros beetle, an invasive pest that can destroy coconut plantations.

Farmers are also experiencing changes in fruiting patterns for major crops. Farmers are relocating their vanilla plantations in Vanuatu because it no longer flowers in the area where it was once most productive.

Developing countries are also pushing for the establishment of a loss and damage facility where they can be compensated for damage caused by climate change, particularly to infrastructure. However, no decision has been reached on this demand.

“There will be a lot of competition on what goes in the loss and damage fund, but I am hopeful that because food is so essential, it will be higher up the priority list when it comes to accessing finance through such a facility, if it is agreed on,” Mapusua, told IPS.

Islanders are also dependent on fisheries for food security. This sector has also been affected by rising sea levels and high temperatures, which have led to the bleaching of coral reefs, which are a key habitat for fish.

Mapusua said the island countries were building aquaculture at a local level and poultry to compensate for the projected loss of fisheries.

In Vanuatu, the government was deploying fish aggregating devices (FADS), which are offshore floating objects to attract fish. The project has enabled farmers to harvest fish from the locations where the devices have been installed without travelling far from the coast to fish. In addition, a fishponds system has been promoted at the household level, encouraging families to build their own fishponds to harvest fish.

Nelson Kalo, a Senior Mitigation Officer in the Ministry of Climate Change in Vanuatu, adds there are other projects too.