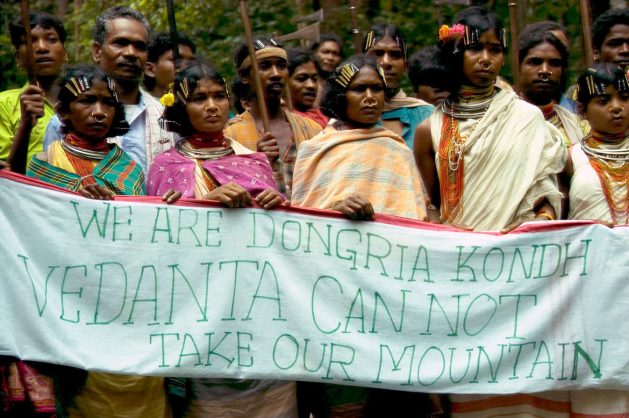 IPBES’ Assessment Report on Diverse Values and Valuation of Nature Report tells of the successful campaign by the Niyamgiri Movement. Credit: Survival International

Nairobi, Nov 23 2022 (IPS) - The Dongria Kondhs say they are the descendants of Niramraja, a mythical god-king who is believed to have created the Niyamgiri range of hills in Odisha, an eastern Indian state on the Bay of Bengal.

This indigenous community has worshipped the Niyamgiri Mountain and lived in the region, which spans over 250 square kilometres through the Raygada and Kalahandi districts of Odisha. Their survival is closely linked to the ecosystem integrity of Niyamgiri Mountain.

But in 2003, a socio-economic conflict of values erupted over the mythical sacred kingdom when Vedanta Resources – a UK-based mining giant – began to acquire land towards constructing an Aluminum refinery at the foot of the Niyamgiri Mountain. This did not require forest clearance.

Protests erupted immediately and intensified when it was revealed that Vendata also planned to acquire Niyamgiri Mountain and mine bauxite, a sedimentary rock with a relatively high aluminium content. In 2004, the company sought approval to clear forest for a mine. Environmentalists moved to court.

Such conflict over short-term profits and economic growth vis-a-vis values that affected communities ascribe to their land came into sharp focus in July 2022 when IPBES released the Assessment Report on Diverse Values and Valuation of Nature.

IPBES provides policymakers with objective scientific assessments about the state of knowledge regarding the planet’s biodiversity, ecosystems and the contributions they make to people, as well as options and actions to protect and sustainably use these vital natural assets.

In this regard, the Values Assessment responds to the need to support decision-makers in understanding and accounting for the wide range of nature’s values in policy decisions to address the current biodiversity crisis and to achieve the UN’s SDGs.

Approved by representatives of the 139 Member States of IPBES, the full report, released in October 2022, found a “dominant global focus on short-term profits and economic growth, often excluding the consideration of multiple values of nature in policy decisions” and that “decisions based on a narrow set of market values of nature underpin the global biodiversity crisis.”

A global biodiversity crisis is increasingly placing economies, food security and livelihoods of people in every corner of the world at greater risk. For instance, IPBES alerted the world that a million species, out of an overall eight million, of plants and animals, now face extinction, many within decades. Today, the world’s wildlife populations have declined by 69 percent since 1970.

The Niyamgiri case illustrates the power issues and value conflicts between economic development projects and indigenous peoples and local communities. Sixty-two tribal groups are found in Odisha, of which 13 are particularly vulnerable.

The Niramgiri Mountain contains approximately 75 million tonnes of bauxite. India is one of five countries that lead the production of bauxite in the global market, according to national data.

The Values Assessment report particularly highlights how the loss of nature’s values in pursuit of profits has led to a crossing of key planetary boundaries, accelerating the twin crises of biodiversity loss and climate change. Such loss was imminent, and the Odisha state government entered a memorandum of understanding with Vendata Resources.

A mining project would set in motion activities to turn an indigenous sacred mountain and the ancestral home of the vulnerable Dongria Kondhs and Kutia Kondhs, among other vulnerable people, into bauxite.

Equally important, the community maintains the Sal Forest because the community honours a taboo against cutting trees on Niyamgiri’s summit. Approximately 90 percent of the 660-hectare mining lease area, agreed upon between the Odisha state government and the mining company, was considered to be Sal Forest.

Resistance against the planned assault on nature was first led by the community with support from professional activists; this led to the birth of the Niyamgiri Movement, a social movement against bauxite mining in the Niyamgiri mountains or indigenous sacred land.

In 2004, environmentalists petitioned India’s Supreme Court not to allow the mine permit, but the petition was unsuccessful. The decision was reversed in 2013 when the Court ordered that the Dongria Kondh’s right to worship their sacred mountain must be “protected and preserved”.

According to the court order, those with religious and cultural values associated with the area must be included in the decision-making process. A local referendum by affected villages unanimously rejected the mining project.

According to IPBES, “the Niyamgiri case includes a range of valuation approaches: the firm’s bottom-line considerations, cost-benefit analysis; focusing on instrumental values, portrayals of ecological (intrinsic) values, and evidence of (relational) cultural values of indigenous peoples.”

In this case, the power to make decisions influences which values were prioritised and which valuation methods were deemed appropriate. IPBES finds that the case also “exemplifies how different valuation logics succeed or fail in representing different life frames and sets of values.”

IPBES references the Life Framework of Values which links the richness of ways people experience and think of nature with the diverse ways nature matters. It shows why the natural world matters. People can live from, live in, live with or as nature.

Living ‘as’ nature characterises a oneness with nature and people. Living ‘with’ nature means living in accordance with nature and living ‘from’ nature prioritising benefits such as profits and economic growth from natural resources over the integrity of an ecosystem.

Conservation activists, IPBES stresses, were grounded upon both the living ‘as’ and living ‘with’ nature frame. An intact Niyamgiri ecosystem is considered a core value, and activists highlighted the intersections between cultural and biodiversity values and the rights of local communities to define their livelihoods.

Overall, the activists managed to represent the cultural, spiritual and territorial values that were most important to local indigenous people and won the day in India’s Supreme Court. Today, the mythical kingdom of Niyamgiri Mountains remains under the control of the descendants of Niramraja, their god-king.