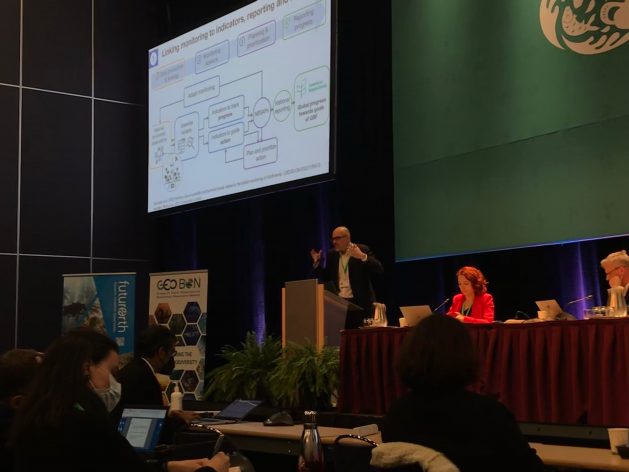 Montreal, Dec 7 2022 (IPS) - Policymakers were encouraged to look at the economic and social aspects with the environmental elements of biodiversity losses to meet the Global Biodiversity Framework (GBF) targets.

Decision-makers gathered on the opening day of the 15th UN Biodiversity Convention for a “Science Day” to learn about the science underpinning the goals and targets of the post-2020 GBF. Held just before COP15’s opening ceremony, the event allowed attendees to hear from experts about the implications of the biodiversity issues under negotiation.

Opening the event, David Cooper, the Deputy Executive Secretary of the Convention on Biological Diversity, underscored the importance of scientific understanding for informing COP15 negotiations.

“We have seen increasing interest by the parties to get good scientific advice. The scientific community is super important to clarify some of the concepts and see how we can produce a framework where actions, targets are coherent with goals.”

In the first half of the workshop, scientists discussed findings from the Intergovernmental Science-Policy Platform on Biodiversity and Ecosystem Services (IPBES) reports and their relevance for the COP15 post-2020 Global Biodiversity Framework. A common thread throughout the presentations was the need for transformative change in how policymakers tackled biodiversity.

Sandra Díaz, Assessment Co-Chair of IPBES’s Global Assessment Report on Biological and Ecosystems Services, stressed the importance of focusing on the economic and social aspects of biodiversity loss—in addition to environmental elements—for transformative change to occur.

“Solutions that target only one of these elements, just nature or just drivers [of biological diversity loss], are not going to be enough. What is needed is for the whole transformative change, fundamental system-change across these ecological, social, and environmental actions,” Díaz said.

Mike Christie, Assessment Co-Chair of the Methodological Assessment Report on the Diverse Values and Valuation of Nature, highlighted that a total shift in societal values was also needed to protect biodiversity.

He said that society’s over-emphasis on material and individual gain has resulted in a devaluation of nature.

“We are currently focused on a narrow set of values that are market values—think, “I buy, you sell. That’s leading us to an unsustainable path. If we want true transformative change, we need to change societal norms; we need to change institutions and make sure we are sustainable in terms of achieving the outcomes.”

Christie added that the insights IPBES developed on considering diverse values in decision-making could support the implementation of the Global Biodiversity Framework as they underscore the benefits of stakeholder involvement and addressing power dynamics.

Among those identified as key stakeholders in biodiversity issues were Indigenous Peoples. Marla Emery, Co-Chair of the Assessment Report on the Sustainable Use of Wild Species, explained that their use of wild species through hunting, gathering, and logging helps maintain high biodiversity.

She emphasized that this was because of Indigenous Peoples’ unique orientation toward nature.

“The practices of Indigenous peoples and local communities are grounded in knowledge and worldviews. They are diverse […], but they have something in common with regards to uses of wild species and the relationships of people and other parts of nature, and that is a focus, a prioritization on respect, reciprocity, and responsibility in all those engagements.”

Scientists also discussed COP15’s monitoring framework, which is being developed alongside its goals and targets. They highlighted certain issues in the drafted framework, which included gaps in national capacity for certain indicators and a need for the additional data collection on biodiversity.

Andy Gonzales, Co-Chair of the Group on Earth Observations Biodiversity Observation Network (Geo Bon), outlined several pivotal steps to make the monitoring framework more effective. These included greater investment in biodiversity monitoring and knowledge sharing across borders. He noted that species records currently cover less than 7 percent of the world’s surface, and most of this data is from North America and Europe.

“Biodiversity change does not recognize borders, so if we are to understand detection and attribution of causes and drivers, we need to be working across borders to achieve a regional and global perspective on change.”

Throughout the workshop, scientists urged decision-makers to listen to their findings about biodiversity loss and act during COP15.

“The science is there. There is no excuse for ignoring the science,” Christie said, summing up his remarks. “It’s over to you as the decision-makers in the convention to listen to the science. Embed some of our ideas that we have left you within the global biodiversity convention so we can actually address the biodiversity crisis and the climate crisis […]  and ensure a sustainable future.”