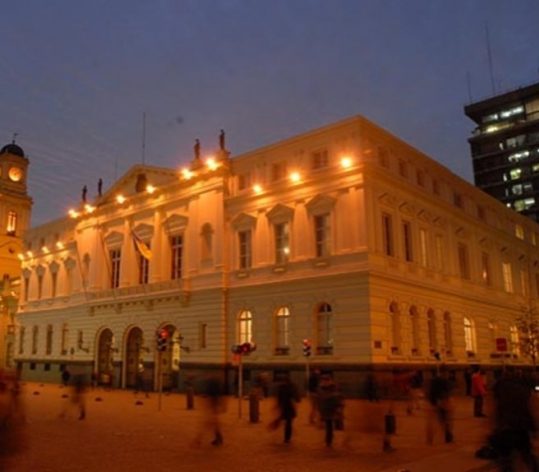 The Municipal Theater building, the main artistic and cultural venue in Santiago, the capital of Chile, was lit up with LED bulbs in order to show local residents the benefits of energy efficiency to reduce costs and provide bright lighting. CREDIT: Fundación Chile

SANTIAGO, Dec 8 2022 (IPS) - The Energy Efficiency Law began to gradually be implemented in Chile after the approval of its regulations, but more efforts and institutions are still lacking before it can produce results.

In Chile, the energy sector accounts for 74 percent of greenhouse gas (GHG) emissions, producing 68 million tons of carbon dioxide (CO2) per year. For this reason, energy efficiency is decisive in tackling climate change and saving on its costs.

The law passed in February 2021 and its regulations were issued on Sept. 13 of this year, but full implementation will still take time. The law itself states that its full application will take place “gradually”, without setting precise deadlines.

For example, the energy rating of homes and new buildings is voluntary for now and will only become mandatory in 2023. In addition, only practice will show whether the capacity will exist to oversee the sector and apply sanctions.

The aims of the law include reducing the intensity of energy use and cutting GHGs.

According to the public-private organization Fundación Chile, energy efficiency has the potential to reduce CO2 emissions by 44 percent – a decisive percentage to mitigate climate change in this long, narrow South American country of 19.5 million people.

“For the first time in Chile, we have an Energy Efficiency Law. This is a key step in joining efforts to achieve carbon neutrality by 2050, since energy efficiency has the potential to reduce greenhouse gases by 35 percent,” the Foundation’s assistant manager for sustainability, Karien Volker, told IPS.

Volker underscored that the law incorporates energy labeling, the implementation of an energy management system for large consumers and the development of a National Plan.

“Upon implementation of the law, a 10 percent reduction in energy intensity, a cumulative savings of 15.2 billion dollars and a reduction of 28.6 million tons of CO2 are expected by 2030,” she said.

She also argued that the law will push large companies to meet minimum energy efficiency standards, which will change the way they operate.

“New homes with energy efficiency certifications will raise the standard of construction in Chile and push builders to innovate,” said Volker.

She added that “the transportation sector will also be positively impacted by establishing efficiency and performance standards for vehicles entering Chile.”

Buildings with the new standards will consume only one third of the energy compared to the current ones.

In Chile, 53.3 percent of electricity is generated with renewable energy: hydroelectric, solar, biomass and geothermal. The remaining 46.7 percent comes from thermoelectric plants using natural gas, coal or petroleum derivatives, almost all of which are imported. 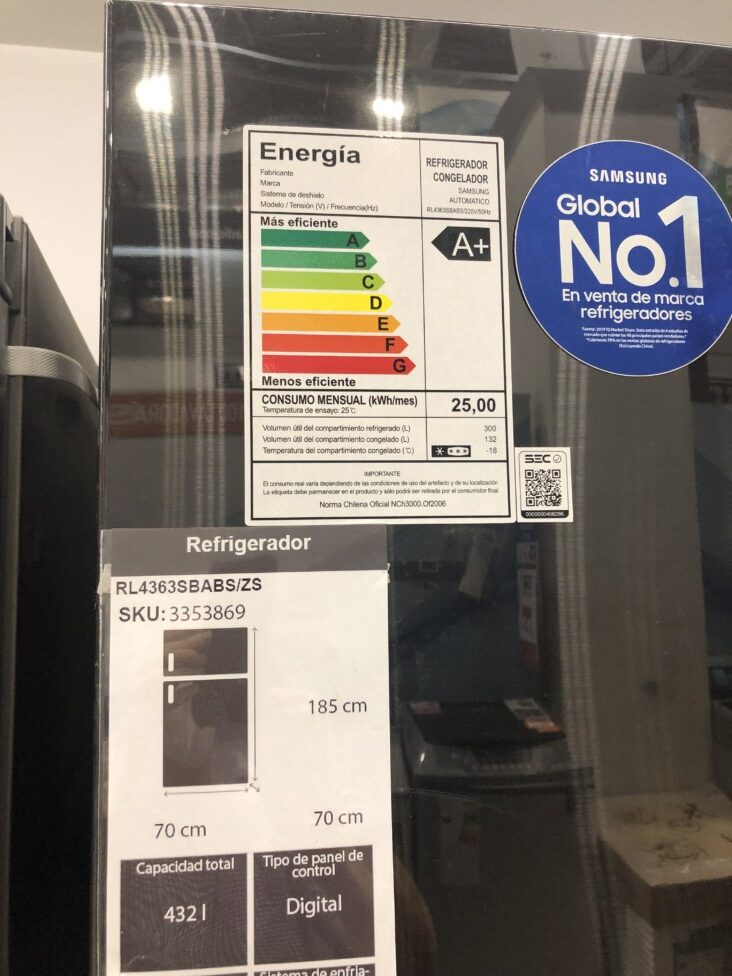 The refrigerators currently sold in Chile must have a mandatory label indicating their energy efficiency, where the highest A++ and A+ levels are labelled in green to demonstrate the savings they provide. CREDIT: Orlando Milesi/IPS

But in the recent history of this South American country the experience of energy savings has not been a positive one. There was total clarity in the assessment of the situation and concrete suggestions of measures to advance in energy efficiency, but nothing changed, said engineer and doctor in systems thinking Alfredo del Valle, a former advisor to the United Nations and the Chilean government in these matters.

Del Valle told IPS that between 2005 and 2007 he acted as a methodologist for the Chilean Ministry of Economy’s Country Energy Efficiency Program to formulate a national policy in this field.

“With broad public, private, academic and citizen participation, we discovered almost one hundred concrete energy efficiency potentials in transportation, industry and mining, residential and commercial buildings, household appliances, and even culture,” he explained.

However, he lamented, “Chilean politicians fail to understand what politicians in the (industrialized) North immediately understood 30 years earlier: that it is essential to invest money and political will in energy efficiency, just as we invest in energy supply.”

Although a National Energy Efficiency Agency was created 12 years ago, “nothing significant is happening,” said Del Valle, current president of the Foundation for Participatory Innovation.

To illustrate, he noted that “the public budget for energy efficiency in 2020 is equivalent to just 10 million dollars compared to an investment in energy supply in the country of 4.38 billion dollars in the same year.”

According to the expert, “we need a new way of thinking and acting to be able to carry out social transformations and to be able to create our own future.”

The Energy Agenda 2022-2026 promoted by the leftist government of Gabriel Boric, in office since March, states that “energy efficiency is one of the most important actions for Chile to achieve the goal of carbon neutrality.”

The document establishes actions and commitments to be implemented as part of the National Energy Efficiency Plan. Published at the beginning of this year, it proposes 33 measures in the productive sectors, transportation, buildings and ordinary citizens, according to the Ministry of Energy.

The plan announces an acceleration of the implementation of energy management systems in large consumers to encourage a more efficient use in industry, “as mandated by the Energy Efficiency Law that will be progressively implemented.”

According to the government, by 2026, 200 companies will have implemented energy management systems.

The authorities also announced support to micro, small and medium-sized companies for efficient energy use and management and will support 2000 in self-generation and energy efficiency.

“Although as a country we have made progress in the deployment of renewable energies for electricity generation, we have yet to transfer the benefits of renewable energy sources to other areas, such as the use of heat and cold in industry,” the document states. 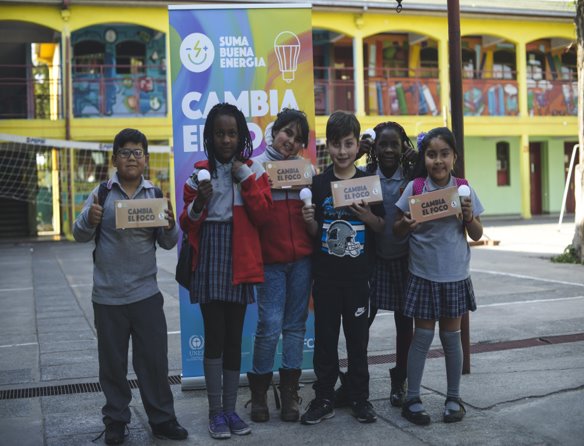 Cambia el Foco is the name of the program promoted by Fundación Chile that included educating students to raise awareness about the need for energy efficiency. CREDIT: Fundación Chile

In Chile there are more than five million homes and most of them do not have adequate thermal insulation conditions, requiring a high use of energy for heating in the southern hemisphere winter and cooling in the summer.

The hope is that by making the “energy qualification” a requirement to obtain the final approval, the municipal building permit, the quality of housing using efficient equipment or non-conventional renewable energies will improve. This will allow greater savings in heating, cooling, lighting and household hot water.

In recent years, the Fundación Chile, together with the government and other entities, has promoted energy efficiency plans with the widespread installation of LED lightbulbs along streets and in other public spaces. It also promoted the replacement of refrigerators over 10 years old with units using more efficient and greener technologies.

One milestone was the delivery of 230,000 LED bulbs to educational facilities, benefiting more than 200 schools and a total of 73,000 students, employees and teachers.

The initiative made it possible to install one million LED bulbs, leading to an estimated saving of 4.8 percent of national consumption.

Meanwhile, the campaign for more efficient cooling expects the market share of such refrigerators to become 95 percent A++ and A+ products, to achieve savings of 1.3 terawatt hours (TWh – equivalent to one billion watt hours).

An old refrigerator accounts for 20 percent of a household’s electricity bill and a more efficient one saves up to 55 percent.

There are currently an estimated one million refrigerators in Chile that are more than 15 years old.