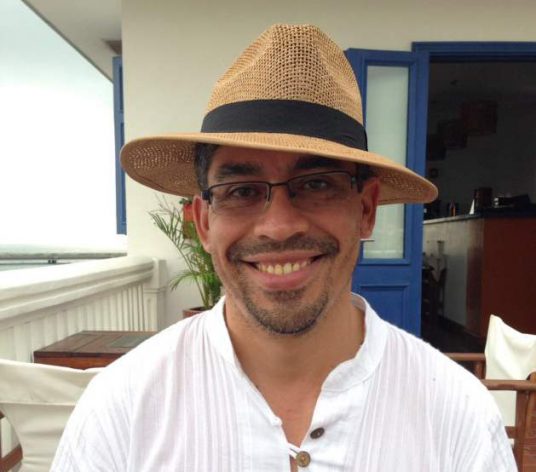 Emilio Godoy, Inter Press Service (IPS) correspondent in Mexico and a specialist in environmental and climate issues, won the prestigious award in that area given by the United Nations Correspondents Association. He is pictured here during his work in the field. CREDIT: IPS

UNCA stressed that Godoy “has covered the ramifications of the climate crisis in Mexico while holding the government accountable, and reported on critical mangrove restoration projects carried out without state support, insufficient measures in the fight against methane and a dangerous focus on liquefied gas.”

Among Emilio’s many journalistic reports, UNCA selected for the award first and foremost the successful story of mangrove conservation and restoration led by the coastal community of San Crisanto, in the southeastern Mexican state of Yucatan.

Along with that story, it highlighted another on the contrast between the Mexican government’s focus on extracting gas and using fossil fuels, leaving aside its commitment to an energy transition to decarbonize domestic consumption.

Emilio said that “I am deeply honored by this award” and expressed special gratitude to his family “and also to the media who have supported my sometimes wild ideas.”

“But above all, this award is for the local communities, like San Crisanto, who protect ecosystems, because their livelihoods depend on them; it also goes to environmental defenders, who are at great risk around the world, and to my fellow journalists in Mexico, who suffer threats and harassment,” he said.

“I say it loud and clear: Stop destroying the planet! No more violence against journalists in Mexico!” he added during his speech at the UNCA awards ceremony on Friday Dec. 9 at U.N. headquarters in New York.

The IPS Spanish language service issued a statement noting that “the award given to Emilio is a source of pride for IPS, because he is a highly committed and diligent journalist regarding the multiple aspects and consequences of the climate crisis, and an excellent researcher of the impacts it has on people.”

The award “also testifies to the importance of climate change in the production of IPS content, through its valuable and sensitized group of journalists,” the statement added.

“As an international news organization, IPS provides very valuable and innovative coverage of the climate emergency, from the perspective of the developing South and its societies, bringing this crucial issue to a very diverse readership,” it said.

Born in Guatemala and based in Mexico since 2002, Godoy has been an investigative journalist and correspondent for IPS since 2007. He writes mainly on the climate crisis, environment, human rights and sustainable development, from the perspective of the developing South, and with its people and communities as the main actors.

Dedicated to his profession since 1996, he has worked with media in Mexico, Central America, the United States, Belgium and Spain, and his articles have been cited in books and specialized magazines.

In 2012 he won the Journalism Prize for Green Economy and Sustainable Development and in 2017 the Seventh Annual Energy Journalism Feature Reporting Award.

This is the third time that IPS won the UNCA gold medal for excellence in reporting–in 2012 for its team coverage of the global environment and Earth Summit 2, and in 2013, for its coverage of the humanitarian and development work of the United Nations.

This year, UNCA also rewarded the Prince Albert II Award, with silver and bronze medals, respectively, to Kourosh Ziabari of Asia Times, for his work on the water crisis in Iran, and Samaan Lateef of the German broadcaster Deutsche Welle, for his reports on the climate crisis in India and Pakistan.

Another UNCA distinction, the Elizabeth Neuffer Memorial Prize, which honors a journalist for The Boston Globe who died on assignment in Iraq, was presented with a gold medal to Francesco Semprini, correspondent for the Italian daily La Stampa, for his coverage of the war in Ukraine following the invasion by Russian forces.

The silver medal went to Michelle Nichols of Reuters for her breaking news on developments within the UN, and the bronze medal to freelance journalist Stéphanie Fillion for her coverage of Germany’s efforts to tackle the COVID-19 pandemic.

UNCA, made up of 200 correspondents who cover the UN, honored U.S. actress Kate Hudson, Goodwill Ambassador for the United Nations World Food Program, as its guest of honor at the award ceremony.