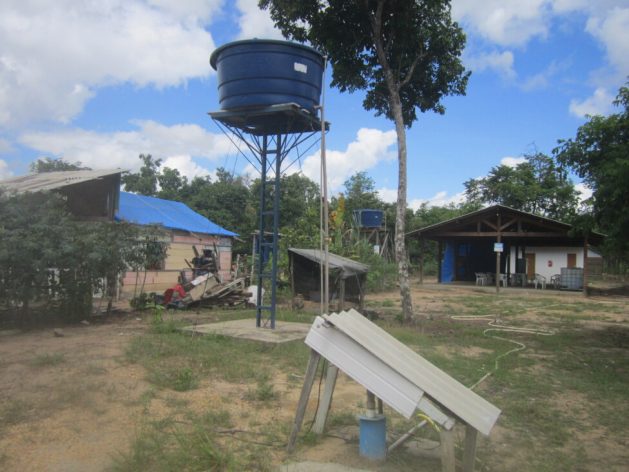 A view of houses, a water tank, a pump and a Warao meeting center in Janoko, a community that is home to 22 families of this Venezuelan indigenous people who migrated to Brazil. Together they acquired 13.4 hectares in Cantá, a municipality in the northern border state of Roraima, and with that land they have begun a process of insertion and autonomy in the host country. CREDIT: Mario Osava/IPS

BOA VISTA, Brazil , Dec 7 2022 (IPS) - A group of Warao families are, through their own efforts, paving the way for the integration of indigenous Venezuelans in Brazil, five years after the start of the wave of their migration to the border state of Roraima.

“It’s a model to follow,” said Gilmara Ribeiro, an anthropologist with the Indigenous Missionary Council (CIMI), linked to the Catholic Church, which since 2017 has been helping indigenous immigrants from Venezuela, most of whom have refugee status.

Fifteen families acquired a 1340 square meter plot of land in the municipality of Cantá, population 20,000, and joined seven other families to form the Warao community of Janoko, inaugurated in May 2021. “Janoko” means house in their native language, while “Warao” means people of the water or of the canoe.

Makeshift dwellings made of wood or still under construction make up the village in which the Venezuelan indigenous people are trying to rebuild a little of the community life they had in the Orinoco delta on the Atlantic ocean, their ancestral land in the impoverished northeastern Venezuelan state of Delta Amacuro.

They are now creating a community like their old ones, in a wooded area 30 kilometers from Boa Vista, the capital of Roraima, population 436,000.

The vast majority are Waraos, but there are also a few families of the Kariña people, who come from several northern Venezuelan states. Many of them traveled the 825 kilometers that separate the Orinoco delta from the Brazilian border of Roraima, in an almost straight line to the south, partly on foot and partly in buses or by hitchhiking. 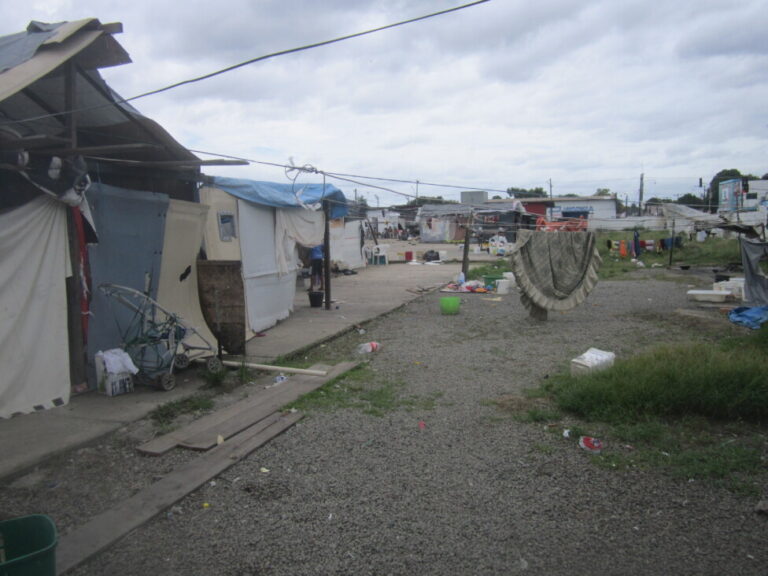 Pintolandia ceased to be one of the shelters of the Brazilian Army’s Operation Welcome and the UNHCR and since March has become an unofficial camp for 312 Venezuelan indigenous people, lacking food and services, on the outskirts of Boa Vista, capital of the state of Roraima, in the extreme north of Brazil. CREDIT: Mario Osava/IPS

Janoko is the dream that Euligio Baez and Jeremias Fuentes, “aidamos” or leaders in the Warao language, want to imitate in Pintolandia, where they were hosted by the Brazilian Army’s Operation Welcome with the support of the United Nations Refugee Agency (UNHCR) and the International Organization for Migration (IOM).

Pintolandia, in a neighborhood on the west side of Boa Vista, has now become a precarious, unsanitary camp where 312 indigenous Venezuelans live. It was an official shelter in somewhat better conditions until March, when Operation Welcome decided to transfer the Venezuelan natives to another camp, Tuaranoko.

The population of the camp has continued to grow with the arrival of new migrants and it has become an irregular occupied zone, because almost half of its nearly 600 refugees refused to relocate and remain in the facility, a multi-sports stadium, where the indigenous people set up their tents and traditional woven “chinchorros” or hammocks.

“The new shelter is very far from the schools, and the children there have stopped studying. The 46 children here are still going to school. That was the first reason we refused to go,” Baez explained to IPS in a building without walls in Pintolandia, where health professionals from Doctors Without Borders provide care to the people in the camp.

In addition, Operation Welcome “does not respect our customs, does not consult us when making decisions” and does not allow anyone to enter the camp, he explained. 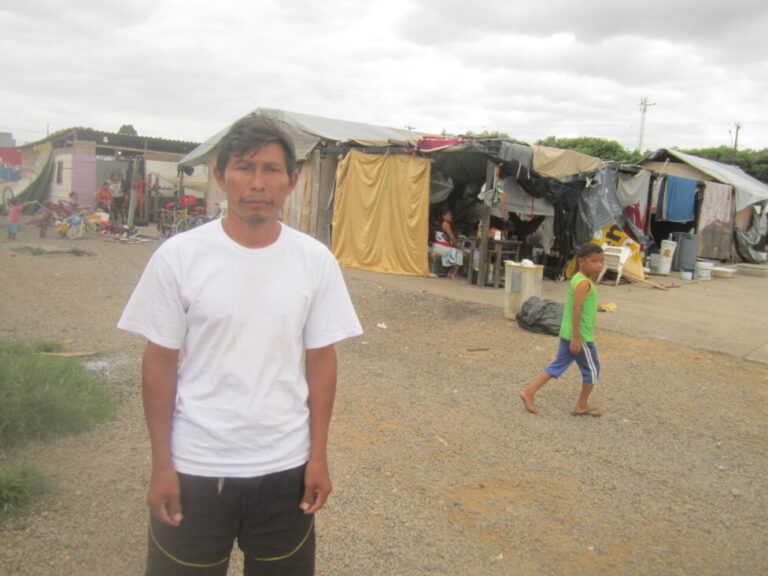 Euligio Baez, one of the “aidamos” or leaders, in the Warao language, of Pintolandia, on the outskirts of the Brazilian city of Boa Vista, is opposed to the relocation of members of the Venezuelan Warao people to a new shelter, because it would take the children away from their schools, without offering possibilities of economic and social insertion for indigenous immigrants and refugees in Brazilian society. CREDIT: Mario Osava/IPS

This is the case even if they are relatives or people from the organizations that help the refugees, such as CIMI and the Indigenous Council of Roraima, an organization made up of 261 communities from 10 indigenous peoples from the state.

Roraima is the Brazilian state with the highest proportion of indigenous people, 11 percent of the total population, who occupy 46 percent of its surface area in lands reserved for their communities.

Indigenous Venezuelans complain of threats and pressure to force them to move to the new shelter. Since September, they have been suspended from receiving food, which continues to be provided in Tuaranoko.

They collect aluminum cans, cardboard and other recyclable materials, and receive occasional help from social organizations and individuals, to have an income that allows them to eat and survive, according to Baez. 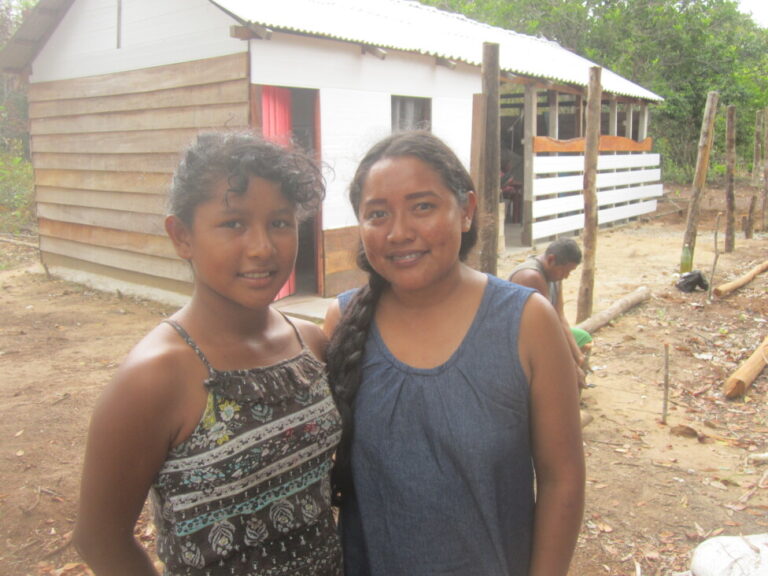 Leany Torres (R) and her daughter stand in front of the house in the Warao community of Janoko, where she is one of the ”aidamos” or leaders, in Warao, on this collectively acquired land in the state of Roraima, in the extreme north of Brazil. Her husband, Francisco Flores, is now building his father-in-law’s house next to theirs. The indigenous Venezuelan Warao people live in extended families that can exceed 100 members. CREDIT: Mario Osava/IPS

No jobs or economic inclusion

“I’ve been here for six years, and nothing has been done to offer us an alternative for a better future, to support our projects. Those in charge know that we want land, they know our ideas and the anthropologists’ assessment of the situation,” Fuentes, a 32-year-old father of three, complained to IPS.

“A piece of land is essential. We are farmers,” he added.

“We want land to build a house, to grow food and plants for our traditional medicine, to raise chickens and pigs. A piece of land is the best solution for us,” said Baez, 38, who has seven children, after an eighth child died in Boa Vista.

The criticisms voiced by both leaders are strongly directed at the UNHCR, which assumed more direct management of the reception of Venezuelans, in view of the relative withdrawal of the Brazilian Army.

Operation Welcome and the UNHCR justified the relocation due to “irreparable infrastructure problems” affecting water and hygiene in the old shelters. And they argue that there was sufficient consultation with the Venezuelan indigenous people themselves before the move. 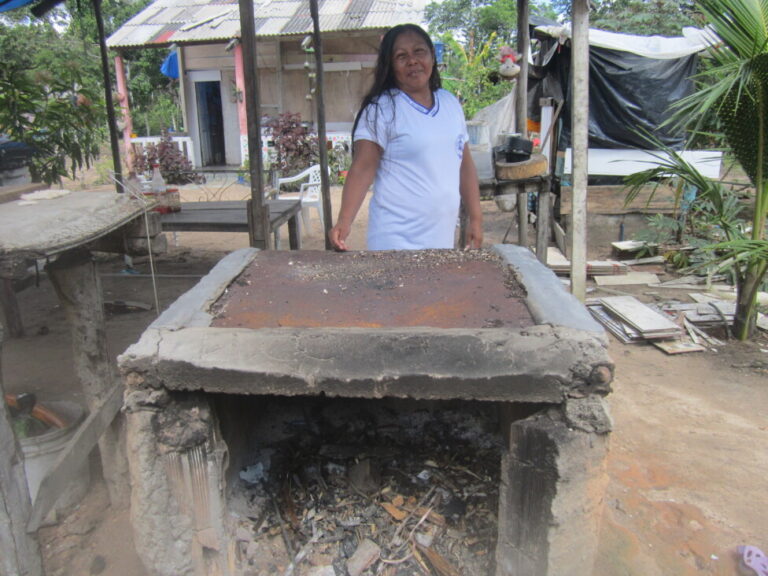 Diolinda Tempo, one of the few Venezuelan Kariña people in this majority Warao community, settled in the Cantá municipality in northern Brazil, where she produces casabe, a crunchy, thin, circular bread made from cassava flour, which she makes with a small mill invented by her father, Diomar Tempo. His cassava is the family’s source of income. CREDIT: Mario Osava/IPS

“Operation Welcome played a positive role in its initial assistance, offering documentation and food to Venezuelans arriving in Roraima, but it does not help people integrate in the broader community. There are almost no public policies to provide work and income alternatives” for the immigrants, said Gilmara Ribeiro in an interview with IPS at the local headquarters of the Catholic Social Pastoral.

But a good part of the responsibility falls on the municipal and state governments, “which have been totally absent” from an issue that directly affects their territories, she said.

The chaos has been overcome, but not the exclusion

Even so, the situation today is calmer and more stable than it was five or six years ago, when a wave of immigration hit Roraima, with many Venezuelans living on the streets and a rise in violence.

At that time, it was the civil society, indigenous, human rights and migrant and refugee organizations that mitigated the effects of the wave of Venezuelans fleeing hunger and alleged political persecution. 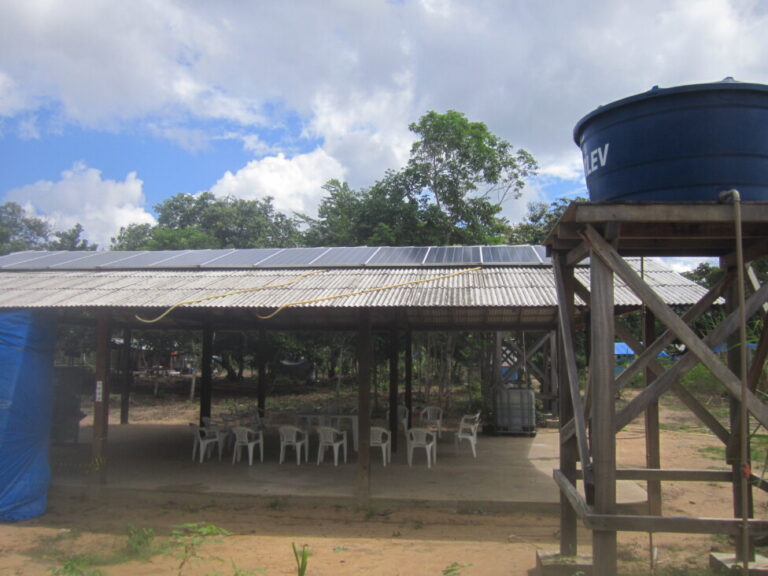 The meeting center is fitted with solar panels that provide electricity to the Janoko community of 22 Venezuelan families of Warao indigenous people. As the batteries store little energy and two of the eight are damaged, the electricity only lasts until 8 PM. CREDIT: Mario Osava/IPS

Francisco Flores, a 26-year-old Warao Indian, lived on the streets of Paracaima, a city of 20,000 people on the Venezuelan border, for the first few months after his arrival in Brazil three years ago, before being taken into a shelter.

At that time a policeman approached him, suspicious of his intentions. He then ordered him to leave using the Portuguese word “embora”, but with the local pronunciation which leaves out the first syllable. For the Warao people, “bora” is a plant that provides a fiber used in handicrafts. So Flores answered “I don’t have any bora” and the policeman attacked him with pepper spray.

It was not until his second year of living in the shelter that Flores managed to get a job in Boa Vista that has enabled him to save some money to build, on his days off, his house and that of his father-in-law in the Warao community of Janoko, where his wife, Leany Torres, 32, is an aidamo and lives with her daughter, niece, mother and father.

Janoko is home to 68 people from 22 families, 15 of whom have the right to the land, which, divided, means just 89.3 square meters for each family. There is little left over to grow cassava, fruit trees and vegetables, but the indigenous people manage to feed themselves and survive.

Their beaded handicrafts, made by Torres and her mother, or vegetable fiber baskets, a specialty of William Centeno, a 48-year-old father of three, are a source of income.

Diolimar Tempo, a 38-year-old Kariña indigenous mother of three, who was a primary school teacher in Venezuela, earns some money making “casabe”, a thin, crunchy circular cake made from cassava flour. Her father, Diomar Tempo, 58, invented the little machine that grinds the cassava to make the flour.

The mothers are pleased that their children attend the schools in the city of Cantá, where the local government provides a bus to transport the students.

They are pioneers in recovering some features of their way of life among the 8200 indigenous Venezuelans registered as immigrants in Brazil, 10 percent of whom are recognized as refugees, according to UNHCR figures.