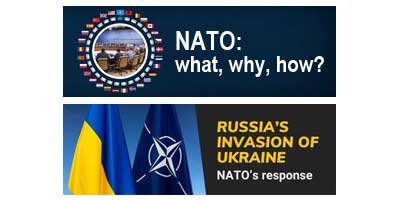 GWANGIU, South Korea, Jan 17 2023 (IPS) - Given the tensions in the Indo-Pacific, a co-operation between South Korea, Japan and NATO sends a message of deterrence and shared liberal values.

The year 2022 was pivotal for the West and the NATO military alliance. Russia’s invasion of Ukraine and China’s mounting military threats against Taiwan forced NATO to recalibrate its risk analysis.

The NATO summit in Madrid in June was, therefore, remarkable in that two far-eastern states, South Korea and Japan, were invited. While Japan already has the status of a Western actor within the framework of the G7, the invitation to South Korea to attend the summit was particularly surprising.

Although Seoul has been a global partner of NATO since 2006, co-operation to date has been essentially diplomatic. South Korea had already been invited to NATO meetings of foreign ministers several times before, but this had not led to any geopolitical commitment on its part to NATO or Europe.

But circumstances have changed. The invitation to the summit was driven by NATO’s most important member by far – the US, an ally of South Korea. Does this mean that Japan and South Korea will now take on new significance for Europe and the Far East in terms of security policy?

There was immediate praise for the Indo-Pacific strategy from Washington.

On 28 December, the South Korean government under new President Yoon Suk-yeol published a strategy for the Indo-Pacific region for the first time. It stated that the country’s focus should be on promoting freedom, peace and prosperity through the creation of a rules-based order and co-operation on the rule of law and human rights.

The 43-page document includes only one paragraph on China, Seoul’s largest trading partner and the rival of its most important ally, the US. On taking office in May, Yoon announced a hard line towards China and since then has intensified the security co-operation with the US.

The Indo-Pacific strategy indirectly addresses fears of military action by China against Taiwan and calls for a resumption of the summit meetings between South Korea, Japan and China, the last of which took place in 2019.

It states that co-operation with Japan is essential for promoting co-operation and solidarity between like-minded nations in the Indo-Pacific region – a clear indication that Yoon wants to improve relations between these neighbouring countries.

Seoul also wants to expand co-operation with the Quad – the Quadrilateral Security Dialogue between Australia, India, Japan and the US – which is seen as a counterweight to China’s ambitions in the region. There was immediate praise for the Indo-Pacific strategy from Washington.

Advantages of closer co-operation for NATO

Closer ties between South Korea and Japan and a security partnership with the two East Asian states would have strategic advantages for NATO. With South Korea, it can benefit immediately from the strength of the country’s armed forces, not least in light of China’s military build-up in the Indo-Pacific.

The competitiveness of its arms industry is demonstrated, for example, by Poland’s purchase of South Korean tanks and howitzers in response to Russia’s invasion of Ukraine. Third, as a leader in digital technology, South Korea can strengthen NATO’s cybersecurity against Russia and China (and North Korea).

The current Japanese government under Fumio Kishida wants to raise the country’s military spending to two per cent of GDP by 2027 and to acquire 500 Tomahawk cruise missiles. Such an enhancement of Japan’s military capabilities would provide NATO with further strategic options in the face of China’s military build-up in the Indo-Pacific.

Advantages for South Korea and Japan

From a Far Eastern perspective, a strategic partnership with NATO would help in managing the Chinese military threat.

As a first step, joint military exercises involving NATO and East Asian countries could be held in the Indo-Pacific (where the US, France, the UK and Germany already have a military presence) or in Europe, in order to enable, for instance, the defence of free and unfettered trade flows in the South China Sea.

As a second step, the Far Eastern countries and NATO could perhaps establish an intelligence alliance comparable to the ‘Five Eyes’ of the Anglo-Saxon powers. This would enable the two sides of the alliance to exchange military intelligence and facilitate the formulation of joint strategies towards China and Russia.

As a third step, NATO and the Far Eastern countries could establish an informal military alliance similar to the Quad, which would strengthen collective security on both sides.

Co-operation between South Korea and NATO not only sends a clear message about deterrence but also represents a commitment to the defence across the world of the liberal values that both sides share.

For a successful strategic partnership between NATO and the Far East to develop, relations between South Korea and Japan must improve significantly. The smouldering conflict over how to address the issue of Japan’s colonial history stands in the way of close co-operation.

The enforced prostitution of Korean women during the colonial period, the visits of Japanese politicians to the Yasukuni Shrine, where Japanese war criminals are buried, and the border dispute over the Liancourt rocks (Dokdo in Korean, Takeshima in Japanese) are some of the unresolved historically controversial issues.

This is compounded by the Japanese trade sanctions imposed on South Korea in 2019, which aim to impede the further rise of the South Korean industry. Fortunately, the current South Korean government under Yoon Suk-yeol is keen on significantly improving relations with its neighbour in order to boost a security co-operation between the two sides vis-à-vis China and North Korea.

The Japanese government will now have to respond to the signals from Seoul, if necessary, also involving the US as a mediator.

NATO’s decision in August to accept South Korea’s request to designate an embassy to represent the country in dealings with the military alliance bodes well for the development of a close strategic partnership. Given the rising military tensions in the Indo-Pacific and China’s military threats against Taiwan, co-operation between South Korea and NATO not only sends a clear message about deterrence (and thus the prevention of war) but also represents a commitment to the defence across the world of the liberal values that both sides share.

Dr Taehun Lim, who works at the Institute for Eurasian Research and Humanities at Chonnam National University, South Korea, studied international politics at the University of Strasbourg and received his PhD in the same field from the University of Cologne. From 2011 to 2013, Dr Lim served as an artillery lieutenant in the South Korean army.