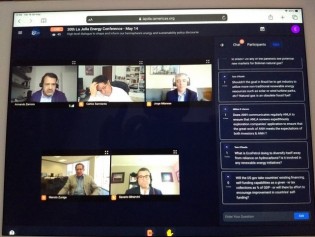 By Emilio Godoy
The gas producing countries of South America are debating on how to make better use of the resource and how to integrate the sector, amid geographical and infrastructural barriers.

By Yanghee Lee
In one particularly bloody day in March, Myanmar’s security forces shot and killed at least ten children, some as young as 6, in violent crackdowns against peaceful protests. Since the military seized control over the country three months ago, more than 50 children have been killed, countless others injured, and more than 900 children and young people arbitrarily detained across the country.

By Valentina Lares
While Western countries were busy with their own vaccination campaigns, Russia has filled the leadership vacuum in developing countries. Amid the West’s scramble for vaccines, a trickle of news flies under the radar. Argentina becomes the first country in South America to produce Russia’s Sputnik V vaccine. The first shipment of Sputnik V is promised to Peru by May.

By Yasmine Sherif
The month of May marks mental health awareness month or mental health awareness week in several countries around the world. Many people will be reading posts and blogs about the importance of getting more sunshine and exercise to avoid the blues, about ways to deal with the stress of the pandemic, about dealing with everyday challenges that disrupt our striving for happiness.

By Shubha Nagesh and Ifeanyi Nsofor
The media is awash with the devastating news of deaths and sufferings due to COVID-19 coming out of India. What most media outlets overlook is the way Indian communities are rallying to save lives, reduce sufferings and stop the current wave of the pandemic.

By Olanike Adeyemo
The COVID-19 pandemic has shown us that global health challenges cannot be solved only by health sector interventions.

By Jomo Kwame Sundaram
Thanks to President Biden, the US now supports a suspension of intellectual property (IP) rights to increase vaccine supplies. However, without vaccine developers sharing tacit technical knowledge for safe vaccine mass production, it will be difficult to rapidly scale up vaccine output.

By Benjamin Larroquette and Reina Otsuka
Data, analysis and information are essential building blocks in our race to save humanity from the clear and present risks posed by the climate crisis.

By Thalif Deen
As negotiations for the upcoming election—or re-election-- of a UN Secretary-General gather momentum, one undeniable fact looms heavily over the final decision: the choice of a UN chief is the intellectual birthright of the five big permanent members (P5) of the Security Council, namely, the US, UK, France, China and Russia.
Next Page »
ADVERTISEMENT ADVERTISEMENT