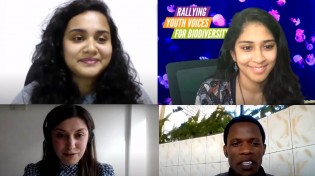 By Martin Kropff and Nteranya Sanginga
17 February - African smallholder farmers have no choice but to adapt to climate change: 2020 was the second hottest year on record, while prolonged droughts and explosive floods are directly threatening the livelihoods of millions. By the 2030s, lack of rainfall and rising temperatures could render 40 percent of Africa’s maize-growing area unsuitable for climate-vulnerable varieties grown by farmers, while maize remains the preferred and affordable staple food for millions of Africans who survive on less than a few dollars of income a day.

The Mountain Kingdom of Lesotho is a place of stark beauty; deep canyons, majestic highlands, vertiginous hillsides, alpine grasslands, sun and sky. Although no bigger than Belgium, it is a critical watershed, giving rise to the headwaters – the ‘white gold’ – that feed two of the major river systems of southern Africa, the Senqu (Orange) and uThukela.

COVID-19 Stimulus Measures Must Save Lives, Protect Livelihoods, and Safeguard Nature to Reduce the Risk of Future Pandemics

By Josef Settele, Sandra Díaz, Eduardo Brondizio and Peter Daszak
There is a single species that is responsible for the COVID-19 pandemic - us. As with the climate and biodiversity crises, recent pandemics are a direct consequence of human activity – particularly our global financial and economic systems, based on a limited paradigm that prizes economic growth at any cost. We have a small window of opportunity, in overcoming the challenges of the current crisis, to avoid sowing the seeds of future ones.

By Thalif Deen
When UN Secretary-General Antonio Guterres addressed the 193-member General Assembly last December, he focused on the smoldering climate crisis-- pointing out that the last five years have been the hottest ever recorded.
Next Page »