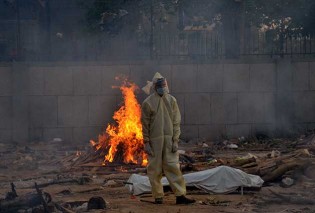 By Leon Usigbe*
Since the COVID-19 vaccination began in the US in mid-December 2020, Africa had been looking forward to its turn. For Nigeria, that time came on 2nd March 2021 when the first batch of 3.9 million doses of AstraZeneca’s COVID-19 vaccine arrived in the country from the Serum Institute of India.

By Laila Barhoum
We were able to keep the coronavirus at bay for five months in Gaza, the densely populated Palestinian strip of land surrounded by Israel that I call home. But the Coronavirus doesn’t respect walls or artificial borders. While preparations were made for the pandemic to inevitably breach a blockade so few Palestinians can, we waited for it to come for us. And it did.

Addressing the Impact of COVID-19 on Infants and Young Children

By Cecilia Russell
More than eight million people moved onto the poverty line in the Arab region, a conference of Arab and Asian parliamentarians heard. The hybrid conference, held simultaneously in Beirut, Lebanon, and via video conferencing to delegates in Asia and the Arab region, was a follow up on earlier discussions on the regions' ICPD25 Commitments.

Maquila Female Workers in Their Own Words: Fighting COVID and Labor Abuse

By Saul Escobar Toledo
A compilation of testimonies collected by Blanca Velázquez Díaz and published by the Ebert Foundation (available at: http://library.fes.de/pdf-files/bueros/mexiko/17328.pdf) offers an account of the harsh reality by which some workers of the maquila industry in the Mexican state of Morelos have gone through over these last twelve months. Their words reflect, undoubtedly, similar experiences of millions of workers in different parts of the country.

Debt Moratoria in the Next Pandemic: Be Prepared, and Be Fair

By Elisabeth Rhyne* and Eric Duflos*
Imagine it is 2025 and that, unfortunately, another pandemic is sweeping the world. Much like in the 2020 crisis, borrowers have seen their livelihoods upended and are struggling to repay loans.

By Naomi Goodman
We should be well on the way to solving the climate crisis by now. According to the Paris Agreement, last year should have been the year that all countries presented their commitments to cut carbon emissions for limiting global climate heating to within 1.5oC of pre-industrial levels.
Next Page »
ADVERTISEMENT ADVERTISEMENT