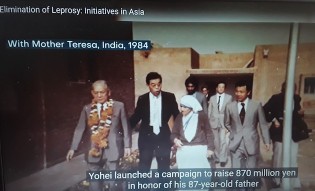 Sasakawa Leprosy (Hansen’s Disease) Initiative is collaborating with 32 organizations from 13 countries to promote the message “Don’t forget leprosy” in the run-up to World Leprosy Day on January 30. The international campaign includes awareness-raising events and outreach to governments and is being publicized via newspapers, television, radio, and social media.
ADVERTISEMENT ADVERTISEMENT