SANTO DOMINGO, Mar 16 2009 (IPS) - On a rainy Saturday evening, beneath the leaking tin roof of an empty carport in a working class section of Santo Domingo, a group of Haitian immigrants met to form a neighbours' association. 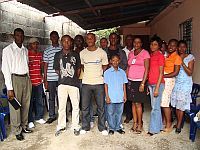 Even relatively well-educated Haitians, like the members of this neighbourhood association, say they face daily abuses in the Dominican Republic. Credit: Elizabeth Eames Roebling/IPS

Some have been living in the Dominican Republic for many years, others for just a few months. But all shared stories of abuses and discrimination, and a desire to create a network that members can reach out to in times of trouble.

One man spoke of seeing a Haitian being beaten by a group of Dominicans inside a building. They knocked out six of his teeth. The witness had no one to call, no way to help, as he too was in the country illegally.

In contrast to the common impression here of Haitian migrants as uneducated peasants, lacking even the simplest papers, such as a birth certificate, only one of the 54 Haitians present lacked a valid Haitian passport, and 20 of them had valid visas for the Dominican Republic.

The bulk of the attendees were young men, between 18 and 30. All reported that they were here because life was so hard in Haiti. Most came with the hope that they could continue their education or at least find work.

Their neatly pressed clothing, shined leather shoes, watches and cell phones, as well as the high cost of both a Haitian passport and a Dominican visa, which costs 200 dollars for one year, indicated that they were among Haiti's middle class.

By a show of hands the attendees indicated that all of them had more than 10 years of formal education. All could speak and write both Kreyol and French, 14 could also read and write in Spanish and five were fluent in English as well. Yet only one had the "cedula", the identity card proving his legal residency here and giving him the legal right to work in the Dominican Republic.

Figures from the Haitian Education & Leadership Programme, which provides scholarships to students in Haiti and hosted former President Bill Clinton and U.N. Secretary-General Ban Ki-Moon on their recent visit to Haiti, indicate that this group represents some of the best educated young people from Haiti.

HELP's most recent statistics show that, with a population of 9 million people, almost half under 20 years old, just 60 percent of Haitians attend primary school, 20 percent make it to high school and 5 percent graduate.

This particular group of educated young Haitians had come to the Dominican Republic to find work in the tourist hotels, in construction, as household workers, or day labourers, in the hopes that they will survive and be able to send some money home.

They spoke of the difficulties that they were all having in finding work.

"We are hard workers. But the jobs require that we have residency papers, and those are almost impossible to obtain for us," one said.

The Dominican Republic has a programme through which foreigners may obtain residency, but its requirements are lengthy.

The first step, for provisional residency for one year, requires a certified copy of the applicant's birth certificate, translated into Spanish by a official translator, copies of relevant pages from a current valid passport, blood tests to indicate that the applicant is free of HIV, TB and drug use, four photographs, a certificate of good conduct from the police in the Dominican Republic, and a letter from a Dominican legal resident guaranteeing that s/he will be responsible for all the costs of that person during the process of obtaining residency and will also pay costs for deportation or repatriation, should that be needed.

In lieu of a guarantor, the applicant must have on deposit in the Dominican Republic at least 2,800 dollars. The same documents will need to be filed again in one year for a permanent residency.

While it is not officially required, most foreigners use the services of attorneys whose fees start around 1,000 dollars. For most Haitians, this sum represents three years' total earnings. Despite the fact that the Dominican Republic depends in large part on Haitian labour for its agricultural, sugar cane and construction industries, there is currently no programme for guest worker visas for Haitians.

Marcelin Hamilton spoke of their common experience: "Life for us is not good in the Dominican Republic. Sometimes months pass without being able to buy one phone card for 100 pesos so that we can talk to our families in Haiti. Also our rights as human beings are violated. We live in situations where we do not know what to do: to return to Haiti or stay here."

Francois Philippe, who works in construction, added: "The abuses are daily towards the Haitian migrants. In the construction industry the Haitians are the workers most sought after but while we are necessary and important in the economy of the Dominican Republic, nevertheless, our rights continue to be violated."

"If another foreign person is stopped by the police and asked for his papers, if he says they are at home, the police will let him go to his house and look for the papers, but Haitians, no," Philippe said.

Others nodded their heads in agreement with one young man who said: "The government of Haiti is indifferent to the condition of her people. We ask the international community to request transparency in the management of the funds of the NGOs so that they invest their money in the social problems of Haiti."

"That way, the situation of misery and desperation of the Haitian people can improve with good development plans, so that the future of the youth of Haiti will be more secure," he added.

The meeting ended as it had begun, with all participants standing together in prayer, which practice, they said, was customary in Haiti.