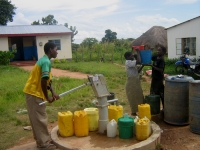 This borehole in Luapula is one of 205 drilled by U.K. charity WaterAid since 1994: 400,000 people have benefited from the wells. Credit: Nebert Mulenga/IRIN

Zambia’s ministry of local government and housing reports that lack of access to safe water and sanitation is a major contributing factor to poverty. In addition to the cost of treatment, women and children spend a disproportionate amount of time and effort in collecting water, and on caring for those suffering from water-borne disease.

This decreases their opportunities for engaging in productive activities to improve their livelihoods, or attending school, which ultimately affects their socio-economic advancement.

One of the areas most affected is the northern province of Luapula. The last national census in 2000 established that despite having more abundant surface water than any other province in the country, Luapula also had the lowest water and sanitation coverage rates standing at 18.8 percent for water, and just 2.3 percent for sanitation.

“What happens is very, very embarrassing,” says Agness Mwamba, a villager from Kamukwamba village in Luapula’s Samfya district. “We have no toilets and no bath rooms. So, some use the river to answer the ‘call of nature’ and we only bathe in the evenings, outside our houses when everyone is asleep, or go and bathe in the river if it is during the day.

“This is the same river from which we draw water for drinking and cooking … we are suffering from diarrhoea and other diseases.”

“The problem we have been having in this province is not lack of access to water, but it is lack of access to safe, clean drinking water because water here is everywhere and it can be collected from any point!” Nyambose says.

“The question is: is that water fit for human consumption? And the answer is no.”

The Zambian government and its donor partners have put in place several programmes to improve the situation. The National Rural Water Supply and Sanitation Programme, running from 2006 to 2010, is a set of investment, institutional and sector support activities aimed at accelerating sustainable provision of water supply and sanitation services to the rural population in Zambia.

Its overall goal is to provide sustainable access to water supply and sanitation in rural areas so as to contribute towards poverty alleviation of Zambia’s rural population as well as facilitate the achievement of water and sanitation development goals.

In 2007, Zambia’s ministry of local government and housing launched the National Water and Sanitation Programme (NWSP), to accelerate progress on access to safe drinking water and improved sanitation facilities by the year 2015 in line with the United Nation’s Millennium Development Goals (MDGs).

In general Zambia does not suffer from a scarcity of either surface or groundwater resources.  The total available surface water resources far exceed the total consumptive demand even in a drought year. According to the National Water Resources Master Plan 2005, even in a drought year, Zambia consumes only five percent of the available surface water.

The problem is to provide cost-effective and sustainable groundwater extraction through boreholes and shallow wells.

But government believes that with the development of clear priorities and common approaches intended to speed up the achievement of the MDGs, they will be able to improve access to water and sanitation in rural areas, and thus help fight poverty.

But unless enough resources are channelled towards the programme, that is unlikely to happen.

A 2005 study by University of Zambia economics lecturer Chrispin Mphuka titled “The Cost of Meeting the MDGs in Zambia”, found that between 1990 and 2000, the proportion of households with safe drinking water in Zambia increased only marginally from 48 to 51 percent, while over the same period, the proportion of households with access to improved sanitation actually dropped, from 17 to 15 percent.

“There is a critical need to improve access to safe water and sustain facilities in order to improve the living standards of both urban and rural communities,” recommended Mphuka.

But progress under the NSWP has been slow. According to the 2008 UNICEF statistics, the proportion of households with access to safe water stands at 59 percent for the whole country, while only 43 percent of the rural population accesses clean water.  On the other hand, 59 percent of households in Zambia have own pit latrine, while 7.3 percent use communal latrine, and another 4.6 percent used neighbours’ pit latrines.

The Civil Society for Poverty Reduction (CSPR) is saddened that government has been reducing budgetary allocations to the water and sanitation sectors even in the face of increasing cases of diseases like cholera.

“For civil society, this shows a lack of appreciation of the sector to ensure a healthy and thus productive population. The situation of unhealthy drinking water and unhygienic surroundings is worse in the rural areas where such services are almost non-existent,” says  Ivy Mutwale, programme officer, information management and networking for CSPR.

“Water supply and sanitation is pertinent to meeting the social and economic requirements of a country as well as managing and sustaining the health and environment of a community, aspects which are crucial to human development and ultimately to poverty reduction.”