LIMA, Apr 11 2011 (IPS) - If retired military officer Ollanta Humala wins the Jun. 5 presidential runoff in Peru, he will have to govern with a highly fragmented Congress. And if lawmaker Keiko Fujimori triumphs, her most notable move may be the release of her father, former president Alberto Fujimori, who is serving 25 years in prison. 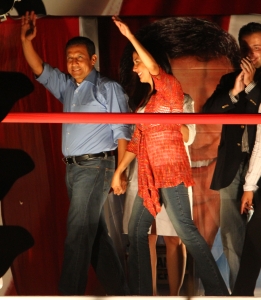 Leftwing nationalist Humala came in first in Sunday’s elections, and according to the partial results, his adversary in the second round will be the 35-year-old Keiko Fujimori, who is conservative and has pledged to be tough on crime.

Humala, a 48-year-old former army officer who heads the Gana Perú party, took 29.3 percent of the vote, followed by Fujimori of Fuerza 2011, with 23 percent, and Pedro Pablo Kuczynski of Alianza por el Gran Cambio, with 21 percent.

The leading candidate had to win at least 50 percent of the vote to avoid a runoff.

Keiko Fujimori, whose father is in prison for human rights violations and corruption, is set to go on to the next round, because the gap between her and Kuczynski is small but consistent, the electoral authorities announced.

The strongest support for Humala was in the southern highlands, where the highest poverty levels are found. Many parts of that region have failed to share in the benefits of the economic boom driven by high prices for minerals and other commodities enjoyed by Peru over the last decade, and social unrest has been frequent.

Last week, four protesters were shot and killed by the police in demonstrations in the southern province of Arequipa against the vast Tía María copper mine project, planned by the Southern Copper Corporation, a subsidiary of Mexican mining conglomerate Grupo México. On Friday, the García administration decided to cancel the project.

The winner of the presidential runoff will have to govern with a highly-divided 130-seat Congress, which will make it necessary to negotiate.

Projections indicate that Humala’s party Gana Perú will have 46 seats in the legislature; Fuerza 2011 will have 38; Perú Posible, of former president Alejandro Toledo – who came in fourth with 15 percent of the vote – will have 21; and Kuczynski’s Alianza por el Gran Cambio, 12.

Meanwhile, “Fujimorismo” – the movement represented by Fujimori – will go from the 13 seats it currently holds to nearly three times that number.

But what is most worrisome about a possible triumph by Fujimori is that she may use the office of president to free her father, the director of the local human rights organisation Legal Defence Institute, Carlos Rivera, told IPS.

“I have no doubt that this is what she will do, even though she tried to change her position on that in the campaign,” Rivera said. “The very first point on the Fujimorista agenda is to release Alberto Fujimori from jail and exonerate him of the crimes for which he was convicted.

“I don’t believe her when she says she will allow the courts to do their work, in the case of her father. That is a lie,” said Rivera, who represented the families of victims in the trial against Fujimori for his responsibility in the Nov. 3, 1991 killings of 15 people, including a little boy, at a barbecue in the Barrios Altos neighbourhood in Lima, and the Jul. 18, 1992 kidnapping and murder of nine students and a professor at La Cantuta University.

Both massacres were committed by an Army Intelligence Service death squad known as the Colina Group.

Jo-Marie Burt, a professor at the George Mason University in the U.S. state of Virginia who researched the legal process against Alberto Fujimori, agreed that his release is his daughter’s chief aim.

Keiko’s declaration that she will accept the ruling of the Constitutional Court, to which the former president has presented a write of habeas corpus, was politically calculated, she said.

“Keiko has maintained repeatedly that she would free her father,” Burt told IPS. “She has modified her discourse now because apparently she is confident that the Constitutional Court will accept a habeas corpus and overturn the sentence. It would be a terrible setback for Peruvian democracy and human rights if Fujimori were to be pardoned – regardless of who does it.”

Fujimori’s campaign is based on handouts to the poor, with constant mentions of what her father did for the neediest Peruvians, Burt said.

“Why is Keiko Fujimori’s logo painted on all the houses in slum neighbourhoods?” asked Rosa María Alfaro, director of the Calandria Association of Social Communicators, a non-governmental organisation that uses communications to promote political, social and economic development in Peru.

“Because Keiko paid the families 30 soles (11.5 dollars) to let the letter ‘K’ – the symbol of her candidacy – be painted on their houses. She also handed out t-shirts, caps, balls and calendars. It is the most blatant show of populism,” Alfaro commented to IPS.