AFRICA: “Ideal for the Development of a Real Economy”

MIDRAND, South Africa, Oct 5 2011 (IPS) - Foreign direct investment in Africa over the last decade has contributed to marked economic growth for the continent but it has not translated into development for its people, say pan-African leaders. 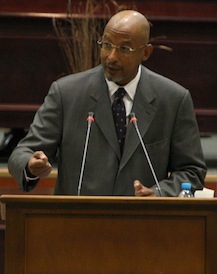 Members of the Pan African Parliament (PAP) ¬¬– the legislative organ of the African Union (AU) – expressed vociferous discontent about Africa’s growth after a presentation on the state of the union on Tuesday, the second day of PAP proceedings. The parliament is meeting from Oct. 3 to 14 for the Fifth Ordinary Session of the Second Parliament in Midrand, South Africa.

Ibrahim Mayaki, Chief Executive Officer of the New Partnership for Africa’s Development (NEPAD), a strategic framework for African development, presented the state of the AU address on behalf of the Chairperson of the AU Commission, Jean Ping. Ping was one of the many expected dignitaries who could not attend the proceedings.

Reading Ping’s address, Mayaki said that the economic policies that have been introduced on the continent over the last 10 years have resulted in an improvement in macroeconomics.

“This has facilitated the attraction of foreign direct investment and Africa is now a prime destination. Maintaining this growth has been a result of implementing successful ways of governance and an intensive democratisation processes,” Mayaki said.

However, not all parliamentarians agreed with this. Loide Kasingo of Namibia said that while the economy may be improving, it was not always in the interest of the people.

“When there’s investment, it doesn’t necessarily mean employment. There must be a change in the world economic order, where Africa moves from being the exporters of primary products towards industrialisation,” she said.

Mayaki said that the international financial crisis was marked by a virtual economy that functioned at the expense of a real economy.

“Africa is a continent that has the highest density of natural resources and of young people. This makes our continent ideal for the development of a real economy far from the upheavals of a virtual economy. The crisis can be an opportunity for us and we need to see it in that light.”

He added that for Africa to manage its resources and develop human capital, there must be appropriate systems of governance based on transparency and accountability.

“Twenty years from now, Africa will weigh heavily on the international arena. The GDP per capita in Africa is higher than in India.”

Mayaki asked parliamentarians to urge their national governments to step up public funding in the agricultural sectors.

“Niger has been mining uranium for 40 years and is the second- or third-largest producer of uranium. They continue to have food insecurity, the mining has done nothing to alleviate the agricultural situation,” he said.

“Growth rates in Africa are not inclusive. We produce wealth but we don’t redistribute it, hence the inequality rates. This is a product of public policies, which are not inclusive enough,” he said.

Referencing the military intervention of the North Atlantic Treaty Organization in Libya against Muammar Gaddafi to pursue regime change, Kasingo warned against foreign interference in Africa. She called for the better application of the African Charter on Democracy, Elections and Governance and the empowerment of the PAP to move towards being a fully legislative body.

Kasingo was not a lone voice opposing the direct foreign military intervention in the North African state. PAP representative for Burkina Faso Marie-Blandine Ouédraogo Sawadogo said it was imperative African leaders unite over the continent’s most pressing issues of conflict.

“There is now a greater need to summon our inner energy to give full expression to the efforts of consolidating the unity of our continent. Our common values – one Africa, one voice; this would’ve prevented what happened in Libya,” Sawadogo said.

Ping acknowledged the creation of South Sudan as the best news of the year so far.

“Africa mobilised to make sure that this happened under the best circumstances. The whole continent came together to ensure South Sudan is a success, especially Kenya, Ethiopia and Uganda, which have played a role in helping South Sudan establish its government systems,” Mayaki said reading Ping’s statement.

With regard to the situation in the Horn of Africa, Mayaki said that there was a strong commitment from the AU towards the region, enabling the beginning of a return to a form of stability. “This commitment should be continued with support from all our countries,” he said.

However, there was one issue that Ping overlooked in his statement to the AU – climate change. Cecilia Barbara Atim-Ogwal of Uganda voiced concern that the AU address did not raise the crucial issue.

“In the media, you see the images of the disastrous effects of climate change. What are the mitigating factors of this change? Do we know where we are as a continent with regard to this?” Atim-Ogwal asked.