BUENOS AIRES, Oct 19 2011 (IPS) - Argentina’s weak, fragmented opposition is going to the polls on Sunday offering neither strong leaders nor clear alternatives capable of winning voters away from President Cristina Fernández, who is expected to easily win a first-round victory. 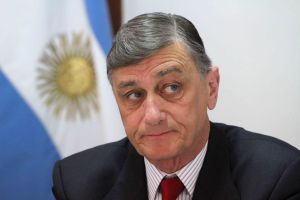 The polls indicate that Fernández, of the Frente Para la Victoria – the centre-left wing of the Justicialista (Peronist) Party – will take at least 50 percent of the vote on Oct. 23, while her closest rival will win no more than 15 percent.

Binner, who is governor of the eastern province of Santa Fe, came in fourth place overall in the party primaries, but today has ratings of over 16 percent. Although many of his proposals are not so different from Fernández’s policies, he seeks to differentiate himself in terms of governing style.

Professor Carla Carrizo at the private University del Salvador told IPS that in democracy “there is always some room for alternatives, even with governments that have been very successful in terms of performance like the current administration – but that margin is created by strong leaders.

“In this case, I believe that among the opposition leaders, the predominant idea is that they are not competing for the presidency – that is, for beating Fernández, but for winning second place,” and in that context “they haven’t offered any real alternatives.”

The latest poll by the Centre of Public Opinion Studies, published over the weekend, found that 63.5 percent of respondents believed the opposition did not present any alternative model, 22.9 percent said it did, and 13.6 percent said they did not know.

In general, the candidates of the ideologically diverse opposition have not put an emphasis on their proposed policies, with the exception of Binner, who offers a clearly outlined programme, and Alberto Rodríguez Saa, the candidate of a dissident right wing faction of the Peronist Party, who has campaigned on the basis of the achievements of his current administration as governor of the western province of San Luis.

In one of his TV spots, Alfonsín, for example, addresses the president rather than the voters, telling her she will “probably” win but that he “doesn’t believe a word she says” and that he will not support any moves that would pave the way for her “indefinite re-election”.

Fernández needs just 45 percent of the vote, or more than 40 percent with a 10 percentage point lead over her closest rival, to avoid a second round.

Large proportions of those polled reject the rest of the candidates. For instance, although the only public post Alfonsín has held is that of deputy in the lower house of Congress, 61 percent of respondents have a negative image of him. Analysts attribute this to a misguided election strategy.

The son of late former president Raúl Alfonsín (1983-1989) refused to form a progressive coalition with Binner, and instead forged an alliance with centre-right Peronist businessman Francisco De Narváez, candidate for governor of the eastern province of Buenos Aires, the country’s most populous.

Former caretaker president Eduardo Duhalde (2001-2002), whose image is negative among 74 percent of respondents, is the candidate of another centre-right dissident Peronist faction. Although he came in third in the nationwide primaries, he may come in fourth on Sunday.

Political analyst Rosendo Fraga, the director of the New Majority Studies Centre, a local think tank, told IPS that “the 50 percent of citizens who voted for the opposition in the primaries show that there is some space for an alternative.

“The cause of the opposition’s failure lies in the lack of a unifying leader and its inability to establish a coalition. There is space for opposition; what is lacking is a leadership with the capacity of channelling it,” he said.

But although a few candidates might have some affinities, the creation of a broad opposition alliance was never likely, since the leaders range from one end of the political spectrum to the other.

Binner referred to this issue when he was asked about the lack of unity among the opposition in the current elections. “What matters now is not beating the front-runner. The only reason for the opposition to unite is against a dictatorial regime, but that’s not the situation here today,” he said.

As Carrizo noted, the most interesting aspect of the elections will not be the president’s landslide victory, but how big a gap there will be between her and her nearest rival.

“When the competitiveness is reduced to these levels, above and beyond how badly the opposition has done things, there is something structural that explains these numbers,” the professor said.

In her view, besides the government’s strong social and economic performance, the factors include the consolidation of patronage ties between the Fernández administration and governors and mayors, a law on parties that favours fragmentation, and the primary elections that the opposition “was unable or did not know how to use efficiently.”

The primaries, which were held for the first time to designate single presidential candidates in each party or coalition, were seen by the opposition as an opportunity to determine who was best-placed to compete in a runoff with the president.

But instead, the primaries served as a nationwide poll that merely demonstrated the strong popular support enjoyed by Fernández – whose husband, former president Néstor Kirchner (2003-2007), died suddenly of a heart attack in October 2010 – and highlighted how far ahead of her contenders she was.

Since then, with the exception of Binner, support for all of the other candidates has declined.

One of the candidates who fared especially poorly in the primaries was Elisa Carrió, representing the centrist Civic Coalition, who took a mere 3.2 percent of the total votes.

Carrío had been a strong competitor against Fernández in the 2007 elections, when she came in second with 23 percent of the vote. But on Sunday her share could shrink even more, according to analysts.

Harshly criticising the personality of the president more than her actual performance, Carrió gradually lost support, and is now talking about retiring to the country.

At this time, lashing out at Fernández brings more negative than positive results, according to the advice given to the legislative candidates of the coalition of Buenos Aires Mayor Mauricio Macri, which has no presidential candidate.

The centre-right businessman, who early this year considered the possibility of running against the president, decided to stay out of the presidential race and merely seek re-election as mayor.

His coalition’s congressional candidates have understood that if they want to win votes, they should avoid speaking out against the Fernández administration.