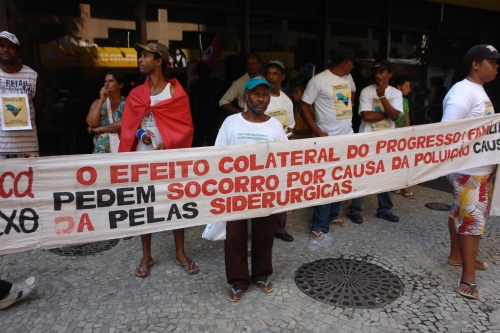 The accusations are laid out in the ‘Report on Vale’s Unsustainability – 2012′, released Apr. 18 in Rio de Janeiro by the International Network of People Affected by Vale, which brings together 30 social movements from Argentina, Brazil, Canada, Chile and Mozambique, some of the countries where the company operates.

According to estimates by the social organisations, the Brazilian company, which was privatised in 1997, caused damage in 2010 on a total of 742 square kilometres.

The international network, a United Steelworkers partner organisation, points out that the company emitted 89 million tons of carbon dioxide – one of the main greenhouse gases – in 2010, and 6,600 tons of particulate matter (such as smoke, soot or dust) – 29 percent more than in 2009.

The statistics on emissions were included by Vale in its latest Sustainability Report, from 2010.

The executive director of the Brazilian NGO Global Justice, Andressa Caldas, told IPS that the report by the international network is a “shadow” document that follows the mould of Vale’s Sustainability Reports.

“Vale has a huge impact, and has violated human rights not only in Brazil but in 37 other countries where it operates,” Caldas said.

With regard to the international network’s report, she particularly mentioned the information on how working conditions have declined for Vale’s workers.

“There are cases, like in Canada, where Vale has radically changed relations between workers and the unions, which prompted the longest strikes in the history of Canada,” Caldas said.

The strikes she was referring to lasted 11 months in 2009 and 2010 in Sudbury and Port Colborne in the east-central province of Ontario, and 18 months in Voisey’s Bay in the eastern province of Newfoundland and Labrador.

“The global crisis was used to justify wage cuts, longer workdays, massive layoffs and cuts in benefits and other acquired rights,” the report says.

In 2012, four workers died in Vale’s operations in Canada.

On Jan. 30, the unit in Sudbury suspended activity in five mines after the death of two workers who were buried in an avalanche of wet rocks, gravel and sand which occurred because there was too much water in the muck in the tunnel where they were working.

Trade unionist Myles Sullivan said the investigation carried out by the United Steelworkers union concluded that Vale had ignored safety issues that caused the workers’ deaths.

Sullivan said in Rio de Janeiro that “unfortunately four workers have died, two of them in the same accident.” He added that the company was aware that safety conditions were inadequate and did nothing to correct the situation. “We are pressing the Canadian government to take legal action against Vale for these accidents,” he said.

The report by the international network also underscores the violation of environmental laws in Rio de Janeiro, by ThyssenKrupp Companhia Siderúrgica do Atlântico (TKCSA), a joint venture between Vale and ThyssenKrupp Steel, Germany’s biggest steel-maker.

The people who live in the area around the TKCSA steel mill have suffered a 600 percent increase in iron ore particles in the air, according to the Rio de Janeiro prosecution service, which had already accused the company and two of the members of its board of directors of environmental crimes.

Vale is a signatory to the United Nations Global Compact, the International Council on Mining and Metals ICMM), and the São Paulo Stock Exchange Corporate Sustainability Index (ISE), all of which establish corporate social and environmental responsibility principles.

But in January 2012 it was named the “Worst Company in the World” by the Public Eye Awards, which every year name and shame the companies that have shown the worst social or environmental irresponsibility.

Vale even beat out Japan’s Tepco, the firm that operates the nuclear reactors in Fukushima, which melted down after the March 2011 tsunami.

The International Network of People Affected by Vale plans to send its report to international bodies like the ICMM and the Global Reporting Initiative, to urge them to pressure the company to modify its conduct.

The company declined to comment to IPS about the allegations. Its press office issued a communiqué stating that it “respectfully receives all suggestions and complaints referring to its operations.”

In its statement, the company also said it was aware that mining activity had an impact, and that it was working in association with communities and governments to find solutions that guarantee people’s safety, as well as harmonious and healthy coexistence.

With respect to the deaths in Canada, Vale said it made a huge effort to avoid such incidents, adopting measures that put top priority on the health and safety of workers.

In its latest Sustainability Report, the company acknowledged 11 accident-related fatalities in 2010, and said it would reinforce its strategy aimed at reaching the target of zero deaths.