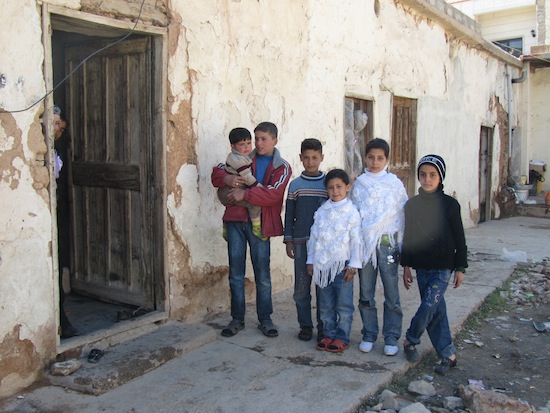 QAA, Lebanon, Apr 13 2012 (IPS) - A few kilometres separate the two Lebanese villages of Ersal and Qaa from the Syrian border, both of which have been unwillingly drawn into the violence of the Syrian uprising. Unrest has been brewing in the region for weeks and recently it was on the receiving end of intermittent gunfire from the Syrian army. The situation remains tense despite the fragile new ceasefire.

An increase in violent altercations, coupled with the area’s proximity to warring Syria, have made it a convenient smuggling hub and refuge for beleaguered Syrian refugees and the injured fleeing escalating fighting in their country – causing serious disruptions in the social fabric of the two villages.

In the past two weeks, the northern Lebanese border came under mortar and bullet attacks from the Syrian army and early this week, Ali Shaaban, a cameraman for the local television station New TV, was killed in Wadi Khaled.

“(People in) Ersal are drawing us into problems by supporting Syrian terrorists,” said Saadeh Toum, Qaa’s former mayor, who claims that Ersal inhabitants are harboring members of the Free Syrian Army (FSA) in the area.

But in nearby Ersal, residents deny playing any part in the conflict. “There are no FSA members in the region. The only support we are bringing to the opposition is first aid kits and medication along with food. We have not been able to smuggle anything in or out of the borders for the past week,” pointed out Abu Wadi, a Syrian activist who runs an underground clinic on the other side of the border and is responsible for the region’s underground railroad.

It is here, on the eastern flank of the mountain, only a few kilometres away from the battered city of Homs, that Syrian militants have set up their headquarters in a computer repair shop that looks more like the office of a non-governmental organisation. Syrian women come in and out, asking for the next round of aid cartons.

One month ago, a truck loaded with 200 loaves of bread would leave every other day for a secret destination: Baba Amr, in Homs. “We were supplying Free Syrian Army officers with their daily ration of bread,” boasted a local resident, speaking to IPS on condition of anonymity.

“Since the beginning of the uprising in Syria, the Qaa Projects have become a haven for smugglers, regardless of their political affiliation,” explained an officer in the Lebanese army, who participated in the arrest two weeks ago of 10 armed militants in the Bekaa valley, who were driving two vehicles loaded with weapons, mortar shells and rocket-propelled grenades into Syria, dressed in military uniforms.

In Ersal, residents and Syrian refugees are waiting for the snowcaps on the chain of mountains separating the two countries to melt.

“Up until now, our only connection to Syria has been through the Qaa Projects, which is heavily encircled by Syrian and Lebanese forces. As soon as the snow melts, we will regain access to Rif Dimashk, the Damascus suburb. It will be impossible for the army to control such a vast expanse of land,” said Ahmad, another Syrian on the lam.

The tension between Qaa residents and their pro-Syria neighbours in Ersal – in an area that falls largely within Hezbollah’s domain – also illustrates the villages’ apparent disconnect from the central government.

According to Mohamad Ezzedine, a member of Ersal’s municipality, the only organisations currently distributing aid in the region are Islamic relief organisations financed by Qatar and Saudi Arabia. The Lebanese High Relief Commission, which is responsible for refugees, is not present in the Projects, although it is active in the northern border region of Wadi Khaled.

According to Lebanese activist Abou Mohamad Ali Oueid, there are about 185 Syrian families currently seeking refuge in Ersal. “Most are staying with local families (but) they have, in a way, overstayed their welcome due to the length of the crisis. We have no other solution than putting up tents on our private property as the government has refused to establish formal refugee camps,” he added.

As a result of improper government action, human rights activist Nabil Halabi claims that the severe shortage of food and shelter has been compounded by attempted hijackings, by pro-Syrian militants, of ambulances transporting injured Syrian refugees to city hospitals.

Within Ersal itself, which forms part of a region that has one of the highest poverty rates in Lebanon, internal tensions are rising as Syrian refugees begin to fill farming and construction jobs, ordinarily carried out by locals.

“They (the Syrians) are willing to work for half our pay, and this is making tensions worse. It is an additional source of pressure in a region that is already very tense,” Oueid said ominously.