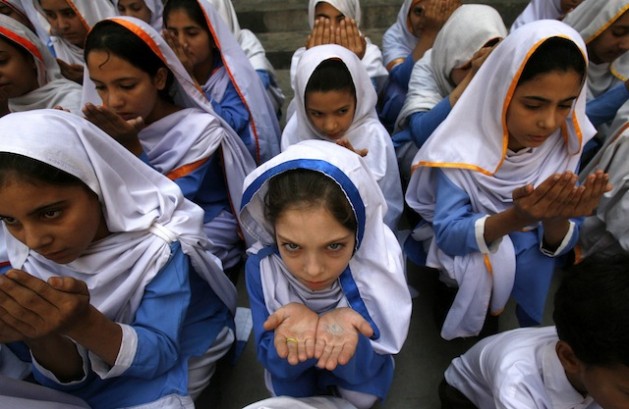 PESHAWAR, Pakistan, Nov 5 2012 (IPS) - Young schoolgirls seemed undeterred by the attempt to kill Malala Yousafzai, but parents in northern Pakistan are becoming increasingly concerned over their children going to school.

The outlawed Tehreek Taliban Pakistan shot and injured Malala Yousafzai, a 15-year-old girl student outside her school in her native Swat district last month. She is making rapid recovery from a brain injury in a UK hospital, but the incident has left a deep impact.

“My wife and I are very concerned about the security of our children because Taliban militants are now looking for soft targets like schoolgirls,” Zawar Hussain, a government official whose three daughters study at University Model School, the biggest girls school in Khyber Pakhtunkhwa (KP) province of Pakistan told IPS.

The Taliban have attacked schoolgirls in various parts of the Khyber Pakhtunkhwa and the Federally Administered Areas before. But the Malala incident has set alarm bells going and people now want better security at schools.

“We have asked the school principal to call an emergency parents-teachers meeting to take measures to enhance security for students in view of Malala’s episode,” Hussain told IPS.

Before Malala, a major attack on the Government Girls Degree College in Lund Khwar in Mardan district in March last year had left 35 students injured in a grim reminder that the Taliban are still active in Khyber Pakhtunkhwa (KP) and in the adjacent Federally Administered Tribal Areas (FATA).

In October last year militants attacked a school van in Peshawar, the capital of KP province, killing four children and a driver.

Girls education became a prime target of the Taliban who sneaked into FATA after dismissal of their government in Kabul by U.S.-led forces towards the end of 2001. They extended their campaign against education to the adjacent KP in 2005.

The militants argue that educating women is in breach of Islam. About 800 school buildings have been blown up in KP and FATA. That campaign continues.

“We are ready to pay extra but we want a safe environment in schools,” said 35-year-old shopkeeper Muhammad Rehan. Gripped with fear for his two daughters, he said the Taliban were now spreading out from Swat.

“Taliban know that girls are an easy target to spread terror,” he said. Elsewhere the Taliban may have to confront security forces, he said.

Sarhad Public School on University Road in Peshawar has put in place a system where students are asked to leave in queues and to not touch any suspicious object.

“We have drafted guidelines for our students after Malala’s attack. The students have been instructed to inform the class teacher if they spot any suspicious persons near the school,” principal Nadeem Ahmed said.

“We have restricted the students’ movements and have warned against leaving school in droves because the attackers want to kill or injure as many as they can.”

Other schools will follow the suit, he said, because parents are pressuring principals to improve security.

“My mother insists that I stay home but I am not afraid,” Palwasha Bibi, a third grader at the Ashraf Memorial School in Canal Town, Peshawar, told IPS. “She (my mother) loves me and wants to see me happy and alive. Her concerns are genuine but we have to take safeguard measures instead of staying away from school.”

Some classmates had been advised by parents to wear veils as part of precautionary measures to avoid being attacked, she said. “The Taliban won’t harm veiled students.”

Education Minister Sardar Hussain Babak told IPS that posting of police at all of the 30,000 schools in the province was not possible but that coordination among parents and teachers was being strengthened to thwart Taliban attempts to scare away students.

“We have started a strategy to arm the schools’ watchmen and increase coordination among schools’ administration and police,” he said. “In some districts we have imparted training to guards.”

Parking of vehicles near schools has been restricted, he said. Police have been directed to keep an eye on the suspicious people near big girls’ schools.

Deputy director for education Ghulam Farooq said they had issued immediate instructions to all schools to make elaborate arrangements for security especially at the time when the students leave school at the end of the day.

“We are carrying out inspections to see the security measures. In case of any laxity, the principals or head teachers of the concerned school will be held responsible and they will face action,” he told IPS.