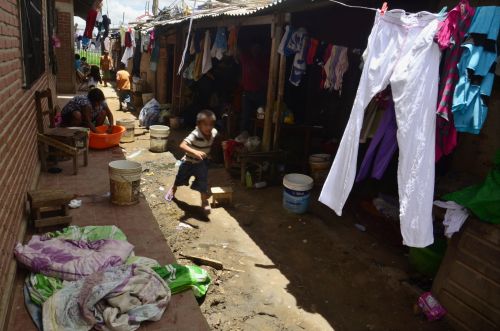 Life in the back alleys of the Degüi Ayoreo community, outside Santa Cruz. Credit: Miguel Ángel Souza/IPS

SANTA CRUZ, Bolivia , Dec 18 2012 (IPS) - No one knows exactly when they will show up, but when they do, it’s impossible not to notice them. In one of the busiest street markets in this bustling city in eastern Bolivia, a handful of members of the Ayoreo indigenous community periodically take over a portion of the sidewalk.

From that base of operations, Ayoreo women and children roam around, selling crafts or panhandling. “Buy my necklace, pretty blonde girl,” says an elderly Ayoreo woman, in broken Spanish, while a barefoot girl comes up saying “give me something.”

In Santa Cruz, a city of nearly three million people, the Ayoreo Indians have become an example of how urban sprawl can devour a culture, making it invisible and stigmatising and endangering it, said anthropologist Luca Citarella.

The Italian-born researcher stated in a study published this year that “in their process of urbanisation, the Ayoreo have become identified and stigmatised as street beggars, sex workers and slum dwellers.”

This can be seen in the Bolívar neighbourhood on the outskirts of Santa Cruz, Bolivia’s economic capital and one of the fastest growing cities in Latin America, whose population has doubled in less than 20 years.

Bolívar contains one of the two urban slums inhabited by the Ayoreo, a historically nomadic group whose language, Zamuco, remains intact.

A block-long sign behind a wall announces the “Degüi Community”, where some 100 families live in 86 houses, most of them made of mud and cane.

An estimated 400 people live in this slum, the most populous of the 29 Ayoreo communities scattered over approximately 600 square km in the eastern department (province) of Santa Cruz, whose capital is Bolivia’s most cosmopolitan city.

“In the countryside there is no work, and we have no healthcare, so our only option is to come to the city,” the leader of the community, Isaac Chiqueno, told IPS.

The Ayoreo are one of the last native communities in Bolivia whose cultural fabric has been torn apart in the clash with mainstream society. Their sedentarisation process began less than 70 years ago.

Teresa Nominé, the first Ayoreo member of Congress, told IPS that “Life in the city is not like in our towns, because there is so much discrimination. We aren’t properly attended to in the hospitals, and in the schools, our children are shunned,” said the legislator, who added that her people were haunted by “bad luck.”

The ancestral home of the formerly nomadic Ayoreo was the northern part of Bolivia’s Chaco region. The Gran Chaco, the largest dry forest in South America, is shared by Bolivia, Argentina and Paraguay.

There are an estimated 5,600 Ayoreo – a word that means “true people” in Zamuco – left in Bolivia and Paraguay.

Traditionally hunter-gatherers, their main activities in rural areas today are subsistence farming and forestry work, while in the cities they are employed mainly in the construction industry and as gardeners.

In both rural and urban areas, the women make, use and sell bags, necklaces and even clothing using the fibres of the garabata plant, which they gather in the forest.

The Ayoreo presence in the city is marked by a traumatic change in their way of life and social patterns. “Besides losing the foundations of the reproduction of their culture, they have been deprived of their dignity,” said Citarella.

Nominé concurred. “The cojñone (whites or mixed-race people) do not give us opportunities, and that changes our reality,” she said. “We come as fathers and mothers to improve our children’s quality of life. As indigenous people, we aren’t familiar with vices. But we come to the city and discover alcohol, drugs and prostitution…it’s our bad luck.”

Irene Roca, a sociologist, said discrimination was the main problem faced by the Ayoreo people living in the city.

“They are the most visible of the indigenous people living in Santa Cruz…The problem is that they are very visible, in a negative way,” she told IPS.

They are seen “as falling outside the acceptable limits of urban behaviour – as sources of crime, begging, sex work. They are depicted as a symbol of urban poverty,” said the expert, who holds a masters degree in ethnology from the social sciences faculty at the Sorbonne university in France.

She stressed that among the urbanised Ayoreo there are many who have tried to complete their secondary studies and get ahead. And she complained that these members of the community are the least visible and acknowledged face of the Ayoreo in the city, to which they have been forced to flock by the poor living conditions in their ancestral territory.

Chiqueno himself is an example. Just before his 50th birthday, he became one of the first eight Ayoreo students to graduate from secondary school, in 2011 at the Degüi school. This year, 15 more students graduated.

“It’s a sacrifice for us; and we need more Ayoreo teachers,” said Chiqueno, who excitedly talks about his next goal: to study political science at the university.

In his family, education comes first, said Chiqueno, a married father of five who hails from the village of Sapocó, some 300 km from Santa Cruz. He tells his children that the only way to get ahead in life is by studying.

Luisa, one of his daughters, is studying social work at the university, and runs the child care centre in Degüi. “Some kids listen to what their parents say,” he said, with evident pride.

Besides education, another of the chief problems faced by the Ayoreo is access to health services.

“In the hospitals, they forget we’re human beings; we only want to be treated with dignity,” said Nominé, who came to Santa Cruz five years ago from the Ayoreo village of Puesto Paz.

In the Ayoreo communities, children still die from diarrhoea and women die in childbirth, while community members who go to the hospital in critical condition have to wait “until someone feels like assisting them,” says a report by the non-governmental organisation Apoyo al Campesino-Indígena del Oriente Boliviano (support for indigenous campesinos – small farmers – in eastern Bolivia).

The report, published in May, studied the conditions faced by the just over 2,700 Ayoreo living in Bolivia.

Many of the problems in access to healthcare are directly related to discrimination and the lack of inclusive policies in public health, the experts said.

It is precisely to seek out healthcare that many Ayoreo leave their rural communities, to become “invisible” urban Indians, said Roca, the sociologist and ethnologist.