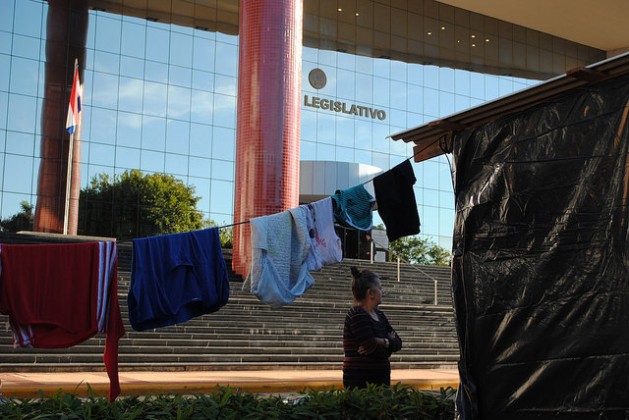 Out of desperation, flood victims in Asunción have built makeshift shelters in public spaces, like this improvised camp opposite the Congress building. Credit: Natalia Ruiz Díaz/IPS

ASUNCIÓN, Jul 3 2014 (IPS) - The worst floods in the history of Paraguay have forced 300,000 people to flee their homes. Asunción, the most affected area, and other urban and rural areas were flooded by the rain-swollen Paraguay and Paraná rivers, foreshadowing what might happen when the El Niño phenomenon kicks in.

“I lost everything, I had my workshop but nothing is left, I only salvaged my tools,” one of the flood victims, Antonio Esteban, told IPS as he tried to fix a television set next to the four walls of wood and metal sheets he put up as a shelter for his family in front of the Congress building, after fleeing the Chacarita neighbourhood.

“I just want to weep, but I hold it back. I have to be strong and keep working, because this flood has left my husband without work." -- Myriam Agüero

“The main problem is getting water for drinking, cooking and bathing,” he said.

The bad news is that the Paraguay river could soon rise further, after reaching the record level of 7.19 metres in the port of Asunción, pushing the waters into the heart of the city after completely flooding the low-lying neighbourhoods along the banks, where boats have become the only means of transport.

Heavy rains have flooded not only Paraguay, but also regions of the Parana basin in Argentina and Brazil. At least 12,000 people have been evacuated in Argentina and 50,000 in Brazil, and the authorities of both countries have warned that the situation will get worse, because more rain is forecast for the coming days.

In Paraguay, more than 15,000 families have been displaced by the floods, according to official figures which are lower than those of local and international organisations. In the capital city with its population of 514,000, over 60,000 people have had to leave their homes to live in camps on military bases or public spaces.

Alejandro Max Pastene, of the climatology department at the National Directorate of Meteorology and Hydrology, told IPS that June, July and August are usually dry months in Paraguay. But this year, heavy rains began in June.

So when the normal rainy season arrives, from October to March, “there will not have been time for the river level to fall.”

Moreover, this year “the rains from October onwards will be particularly intense because of the El Niño/Southern Oscillation meteorological phenomenon,” he said. This is caused by warmer than usual surface temperatures in the east and central tropical Pacific ocean.

Pastene said that the critical level for flooding of the Paraguay river is 5.5 metres, nearly two metres below its current level of 7.19 metres. “In a single day, Jun. 27, as much rain fell as in a normal month,” he said.

Residents in lowlying shanty towns like Bañado Sur, Tacumbú and Chacarita had to evacuate with virtually no help at all.

In improvised shelters on public land, the homeless are living in crowded structures of wood, plastic and metal sheeting. Drinking water and sanitation are their major needs.

Aldo Zaldívar, director of operations at the National Emergency Secretariat (SEN), told IPS the situation had exceeded all forecasts and assistance had not arrived as quickly as was required.

He said the SEN has provided provisions, materials and logistics to 75,000 people in Asunción and over 150,000 people in affected areas in the rest of the country.

“Our orders are to do whatever is necessary to meet the needs of the population. And we are doing this, but sometimes we cannot arrive as soon as people want,” Zaldívar said about the situation that began in June.

But criticism is mounting over the slow and insufficient reaction of the authorities to the worst river flooding in 30 years, especially from social organisations working in the affected areas.

The government of rightwing President Horacio Cartes is coming in for particular criticism for failing to support the lowlying neighbourhoods, local residents and activists reported. Later on, images were being circulated showing representatives of the ruling party proselytising with state aid to the flood victims.

Part of the deficiencies were alleviated by solidarity campaigns organised by NGOs, clubs, youth groups and neighbourhood organisations that collect money, clothes, food and materials to resettle families who have to evacuate their homes.

At present the authorities have opened 86 shelters to house families who had to abandon their homes in Asunción. Two thousand families have been relocated on three military bases alone.

Conditions in the shelters are far from ideal. The main problem is sanitation, as there are no more chemical toilets. The SEN has commissioned the building of toilets and showers in containers, which will be used to alleviate the lack of these facilities in the camps.

Miguel Barrios is a blacksmith, like Esteban, and he was unable to salvage much when the waters reached his home. He finds it incredible that Chacarita is still being flooded after the works built along Costanera avenue, that were supposed to act as a retaining wall by the river.

“The neighbourhood was left in the ‘palangana’ (washbowl), between the Costanera avenue and the Asunción city wall,” he said.

Juan Ramón Martínez, another Chacarita resident, experienced the great flood of 1983, the biggest on record so far in Asunción, and in his view the present flood is much worse.

At the camp in front of the Congress building, people are working with spades, sawing wood and hammering nails in roofs, women and children included. All around, clothes are spread to dry in the sun.

In another part of the city, not far from the historic centre and the downtown area where public institutions are located, Myriam Agüero is evacuating from the Yta Pyta Punta neighbourhood with her husband and four children.

“The floodwaters have arrived, we have no alternative. We can’t even stay on the second storey of our house,” the 33-year-old woman, a leader in the Domestic Workers’ Union in Paraguay, told IPS.

Agüero was born in the lowlying belt of shanty towns in the floodpains along the banks of the Paraguay river, where many women go out to work as domestic employees.

“I just want to weep, but I hold it back. I have to be strong and keep working, because this flood has left my husband without work,” she said with tears in her eyes.

Teodosia Duarte, another flood victim, said with resignation, “They say we will be here for many months.”

According to forecasts, the river level will not fall markedly until 2015.

Duarte is distressed by the thought of what she will find when she eventually goes back to her home and neighbourhood. She pressed her hands against her chest and said in Guaraní, the mother tongue of Paraguayans: “Ñandejara tuicha ohecha kuaá va´era ñandeve” (God is great, he will help us).