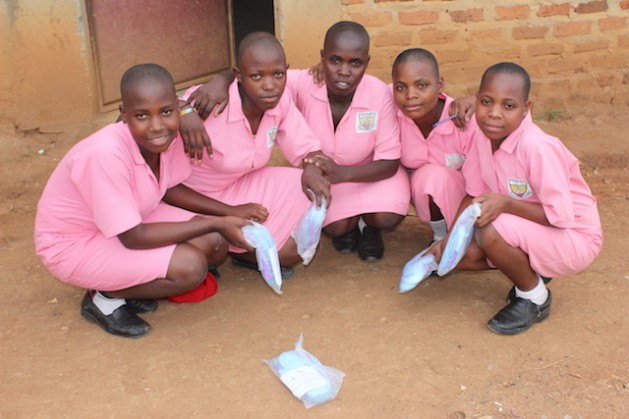 KAMPALA, Aug 15 2014 (IPS) - When Peninah Mamayi got her period last January, she was scared, confused and embarrassed. But like thousands of other girls in the developing world who experience menarche having no idea what menstruation is, Mamayi, who lives with her sister-in-law in a village in Tororo, eastern Uganda, kept quiet.

“When I went to the toilet I had blood on my knickers,” she told IPS. “I was wondering what was coming out and I was so scared I ran inside the house and stayed there crying.

“I just used rags. I feared telling anybody.”

For girls, “pads are as good as schoolbooks” -- Dennis Ntale, 18, a student at co-ed Mengo Senior School in Kampala, Uganda

Not having access to or being able to afford disposable sanitary pads or tampons like millions of their Western counterparts, desperate Ugandan girls will resort to using the local ebikokooma leaves, paper, old clothes and other materials as substitutes or even, as a health minister told a menstrual hygiene management conference this week, sitting in the sand until that time of the month is over.

“We always try to give them something to use at school, just at school,” Lydia Nabazzine, a teacher at Mulago Private Primary School in Kampala, where about 300 out of 500 students are female, told IPS.

“When they go home we don’t know how they go about it, because we cannot afford funding up to home level.”

But the 2012 Study on menstrual management in Uganda, conducted by the Netherlands Development Organisation (SNV) and IRC International Wash and Sanitation Centre in seven Ugandan districts, found that over 50 percent of senior female teachers confirmed there was no provision for menstrual pads for schoolgirls.

When some girls have their period, they may miss up to 20 percent of their total school year due to the humiliation of not having protection, according to separate research from the World Bank. This profoundly affects their academic potential.

“Those days when I was menstruating I could be absent for up to five days a month until menstruation had stopped,” recalled Mayami.

It’s a continent-wide problem. The United Nations Children’s Fund says one in 10 African girls skipped school during menstruation. Some drop out entirely because they lack access to effective sanitary products.

A number of recent initiatives have, however, tried to address this.

On May 28 this year, the world marked the first Menstrual Hygiene Day to help “break the silence and build awareness about the fundamental role that good menstrual hygiene management (MHM) plays in enabling women and girls to reach their full potential.”

On Aug. 14 – 15, East Africa’s first national menstrual hygiene management conference, which has the theme “breaking the silence on menstruation, keep girls in school,” has been taking place in Uganda’s capital Kampala.

At least 100 schoolteachers, schoolgirls – and boys – NGOs, including Network for Water and Sanitation (NETWAS) Uganda, civil society members and others are taking part in the two-day event. They’re calling on the government to put in place a menstrual hygiene management school policy. They also want the government to provide free sanitary pads to girls in schools, like neighbouring Kenya has done.

Despite keeping silent about the horrors of menstruation for months, Mamayi shared with the conference attendees the solution she found to that time of the month.

The student, now 13, had been walking home from school when some older pupils told her, “madam [the teacher] said menstruation is a normal thing for every girl.”

“So I asked them about it,” she told IPS.

Invented by the eponymous Uganda-based social business, AFRIPads are washable cloth sanitary towels designed to provide effective and hygienic menstrual protection for up to a year.

One Ugandan, Dr. Moses Kizza Musaazi, a senior lecturer in the Department of Electrical and Computer Engineering at Kampala’s Makerere University, has also invented the environmentally-friendly MakaPads, from papyrus reeds and waste paper. MakaPads are said to be the only trademarked biodegradable sanitary pads made in Africa.

“Now when I go somewhere [when I have my period] I sit and am comfortable,” said Mamayi. “I’m not bothered by anything. I don’t worry whether I’ve got anything on my skirt. I don’t miss school.”

She added: “I’m going to tell my friends that menstruation is a normal thing in girls.

“I want my friend also to be free, to tell their parents to buy for them pads. Let them not fear.” 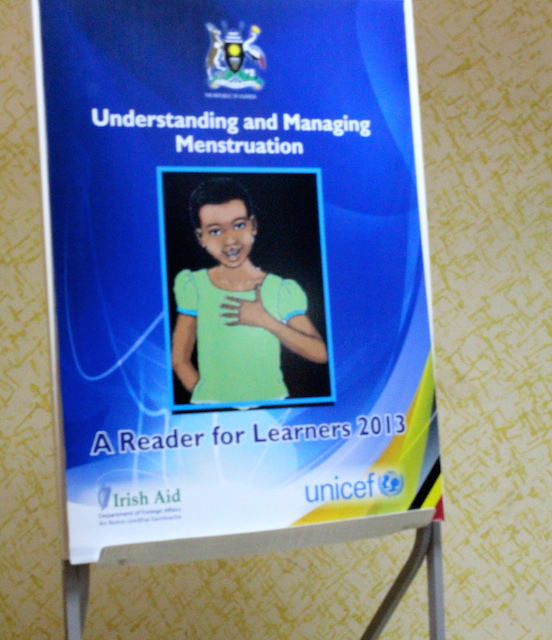 Understanding and Managing Menstruation, was launched by Uganda’s Ministry of Education and Sports at East Africa’s first national menstrual hygiene management conference. The 50-page reader has photos and a section on how to make reusable pads at home, and sections for parents, guardians, peers, friends and schoolboys. Credit: Amy Fallon/IPS

Breaking the culture of silence around menstruation is the aim of a new book, Understanding and Managing Menstruation, launched by Uganda’s Ministry of Education and Sports at the conference. The 50-page reader has photos and a section on how to make reusable pads at home, and sections for parents, guardians, peers, friends and schoolboys.

Maggie Kasiko, a gender technical advisor at the Ministry of Education and Sports, told IPS that the government hoped the book would reach as many students, teachers and parents across the country as possible.

“Not many girls have the opportunities to have their mothers and aunties around, so they start their menstruation without knowing,” she said, adding many parents and relatives were busy trying to earn a living for their families.

Dennis Ntale, 18, a senior five student at co-ed Mengo Senior School in Kampala, said he didn’t know what menstruation was when he encountered a fellow student with her period in class earlier this year, and tried to comfort her. It was only sometime later when he relayed the incident to his male friends and they told him she was “undergoing her MP [menstrual period].”

“They’re [teachers] not teaching this to the boys in schools,” Ntale told IPS.

“I believe boys should be informed about this because there are many of them out there who have no idea about this.”

He said for girls, “pads are as good as schoolbooks”.

“If you don’t have that pad she won’t be able to do a thing,” Ntale said. “[We should] make sure she has what will keep her in school.”

Kasiko said the Ministry of Education and Sports was continuing to ensure schools had separate facilities for boys and girls, with the girls having washrooms and changing rooms where they could bathe and change, had access to clean water, extra pads and Panadol.

But she said she didn’t see the government providing free pads to girls “in the short-term or the long-term”.

“Starting to distribute sanitary towels to each and every girl, every month, is quite a cost for the ministry when you look at all the other areas that the ministry needs to take care of,” she said.

“That, our guidelines for Universal Primary Education (UPE) is very clear, is a role of parents. It’s sanitary wear. Just like you buy a panty for your child, you should be responsible for buying a sanitary towel for your child.

Kasiko added: “But we’ll support the parents and work together with the parents to give them knowledge to ensure the environment is clean and girls stay in school.”