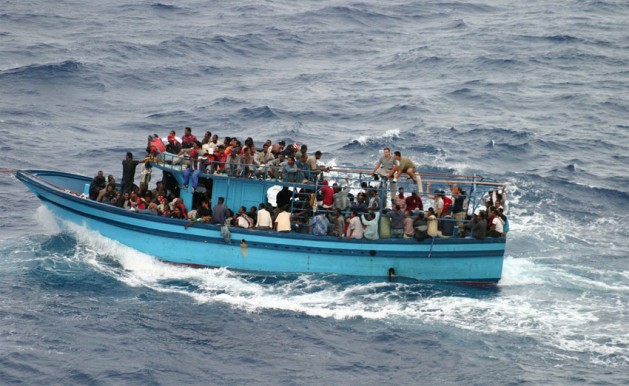 ROME, Apr 15 2015 (IPS) - “The unbearable number of lives lost at sea will only grow if the European Union does not act now to ensure search-and-rescue operations across the Mediterranean,” Human Rights Watch warned Apr. 15.

The international human rights organisation was reacting to reports that as many as 400 migrants may have died in the Mediterranean sea over the past weekend, according to witness accounts collected by the Save the Children charity among the more than 7,000 migrants and asylum seekers rescued by the Italian Coast Guard since Apr. 10.

Noting that 11 bodies have been recovered so far from one confirmed shipwreck over the past few days, Judith Sunderland, acting deputy Europe and Central Asia director at Human Rights Watch said that “if the reports are confirmed, this past weekend would be among the deadliest few days in the world’s most dangerous stretch of water for migrants and asylum seekers.”

Many of those rescued over the weekend remain on Italian vessels as authorities scramble to find emergency accommodation, and Human Rights Watch said that the lack of preparation for arrivals was entirely preventable because many had predicted that 2015 would be a record year for boat migration.

“Other E.U. countries have shown a distinct lack of political will to help alleviate Italy’s unfair share of the responsibility,” according to the human rights organisation.

The European Union’s external border agency, Frontex, launched Operation Triton in the Mediterranean in November 2014, as Italy downsized its massive humanitarian naval operation, Mare Nostrum, which has been credited with saving tens of thousands of lives.

Triton’s geographic scope and budget is far more limited than Mare Nostrum, and the primary mandate of Frontex is border control, not search and rescue.

According to the U.N. High Commissioner for Refugees (UNHCR), as many as 500 migrants and asylum seekers have died already in the Mediterranean in 2015, a 30-fold increase over recorded deaths in the same period in 2014.

However, said Human Rights Watch, if the reports of hundreds more dead over the past few days are confirmed, the death toll in just over three months would be nearly 1,000 people, and that number is likely to rise as more migrants take to the seas during the traditional crossing season in the spring and summer months. The death toll for all of 2014 was at least 3,200 people.

The European Commission is to present a “comprehensive migration agenda” to E.U. member states in May but some of the proposals, while cloaked in humanitarian rhetoric about preventing deaths at sea, raise serious human rights concerns, Human Rights Watch said.

These include setting up offshore processing centres in North African countries, outsourcing border control and rescue operations in order to prevent departures, and increasing financial assistance to deeply repressive countries like Eritrea, one of the key countries of origin for asylum seekers attempting the sea crossing, “without evidence of human rights reforms.”

While some proposals contain elements that could potentially address root causes of irregular migration or provide safe alternatives for migrants, Human Rights Watch said that the proof of their success will rest on whether they respect the rights of migrants and asylum seekers, rather than simply stop the flow.

Early signs of intent suggest that rather than building the capacity to protect, the emphasis will be on enhancing and outsourcing containment mechanisms to prevent departures, and “it’s hard not to see these proposals as cynical bids to limit the numbers of migrants and asylum seekers making it to E.U. shores,” Sunderland said.

“Whatever longer term initiatives may come forth, the immediate humanitarian imperative for the European Union is to get out there and save lives.”

Meanwhile, the debate around immigration in Italy has taken on xenophobic tones in some quarters, with the leader of Italy’s anti-immigrant Northern League, Matteo Salvini, calling on all local authorities to resist “by any means” requests to accommodate asylum seekers, and saying that his party is ready to occupy buildings to prevent arrivals.