Ms Gina Din, the Founder and CEO of the Gina Din group, is a businesswoman from Kenya specializing in strategic communications and public relations. She was named CNBC outstanding businesswoman of the year for East Africa 2015 as well as 40 most influential voices in Africa. 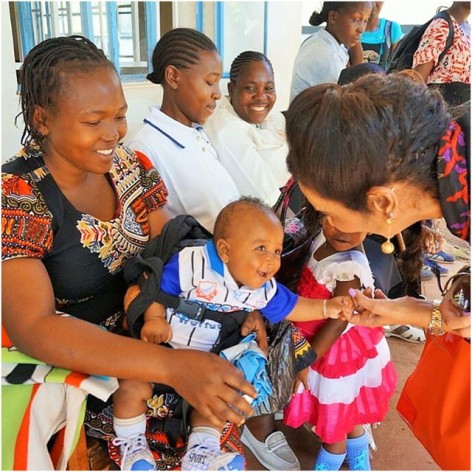 MIGORI COUNTY, Kenya, Aug 8 2016 (IPS) - In some parts of the world, the proverbial “glass ceiling” is shattering. As Theresa May and, most likely, Hillary Clinton join Angela Merkel at the leadership of three major world powers, women’s leadership in politics is on the ascent.

As the National Honorary Ambassador for the United Nations Population Fund (UNFPA) Kenya, I am well aware of just how far women in Africa still have to go not only in their quest for access to political participation, but also in the fight for the basic rights that will enable them to live healthily and safely. In fact, the advancement of women’s sexual and reproductive health and rights is key to achieving their full and equal participation in the social, political, and economic realms.

The good news is that this is now a widely accepted truth: the pursuit of gender equality is not just an abstract ideal, but a prerequisite for human progress.

Throughout the world, UNFPA has been working to change the narrative about the role of women. UNFPA’s message has been that the roles that men and women play in society are not biologically determined, but socially constructed. This means that these roles are man-made and can be changed when circumstances call for it.

That is why UNFPA is working to change the circumstances of marginalized and vulnerable women such as the four in every ten women in Kenya who report being physically assaulted by people known to them. There is a need to change the circumstances of the nine in ten women in the north eastern parts of Kenya who undergo female genital mutilation (FGM), almost all of whom have never gone to school.

A lack of education severely restricts a woman’s access to information and opportunities. Conversely, increasing women’s and girls’ educational attainment benefits both individuals and future generations. Higher levels of women’s education are strongly associated with lower infant mortality and lower fertility, as well as better outcomes for their children.

There is need to give women power over their own bodies; the power to decide who and when to marry, how many children to give birth to and when to do so, the power to stay in school and the opportunity to find employment. When a woman can effectively plan her family, she can plan the rest of her life. Protecting and promoting her reproductive rights – including the right to decide the number, timing and spacing of her children – is essential to ensuring her freedom to participate more fully and equally in society.

In its effort to change mindsets and include women as equal partners at the social and political table, UNFPA Kenya has become a key voice in the national discourse, engaging people across both the public and private sectors and mobilising for more resources to be invested in broad gender equality programmes.

I particularly enjoy working with the UNFPA team led by Siddharth Chatterjee, an indefatigable advocate for women’s rights. His career with the United Nations, in some of the most unstable and risky parts of the world, has exposed him to the suffering that conflicts and disasters bring to communities, with the worst affected always being women and children.

The UNFPA Kenya team has shown the desire for attaining real impact on the challenges that women encounter in their day-to-day lives and – most importantly – empowering them to handle these difficulties on their own.

For instance, as per a report by Deloitte, UNFPA Kenya’s work in 6 high burden counties of Kenya to improve maternal health is bringing real change. I have been humbled to see women in Pokot organize themselves to build a rescue shelter for girls escaping early marriages. I have been amazed at the tenacity of schoolgirls in Baringo who stood firm and convinced their fathers of the harmful effects of FGM. These powerful success stories come out of the activities of UNFPA Kenya, whose leadership has been determined to succeed even in the face of entrenched cultures that deny women any agency.

The task at hand, then, is not to give women strength, but to give society new eyes to perceive the strength that they already possess in abundance.