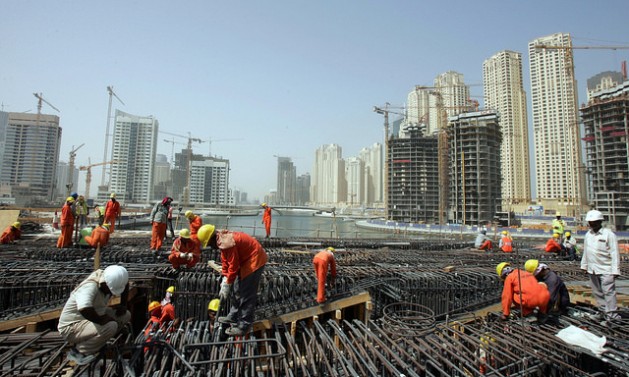 DUBAI, Sep 21 2016 (IPS) - In the Al Quoz industrial area of Dubai in the United Arab Emirates (UAE), a number of medium and large-sized buses can be spotted transporting workers clad in company uniforms to distant worksites early in the morning. In the evening or, in certain cases, late at night, these workers are brought back to labour camps in the same buses.

At the camps, the migrant workers barely have time to rest before the next workday. They huddle inside small, dingy quarters and the number of occupants may rise up to eight per room. With their belongings stuffed into every corner, they hardly have space to move and are vulnerable to catch infections from each other. Their day starts too early as they have to cook their food to carry to the site and ends late due to long journeys amid frequent traffic jams.

“The role of the state becomes important here as migrant workers in the Gulf are voiceless. Without the right to associate and demand rights, they are as helpless as one can think of.” -- Khalid Mahmood of the Lahore-based Labour Education Foundation

The workers at a typical camp hail from different countries, so the common practice is to allocate shared rooms according to their nationalities. At a typical labour camp there can be a Pakistani block, Indian block, Nepali block or Bangladeshi block.

Javed Iqbal, 29, lives in one such labour camp. He has come to Dubai from Pakistan through a middleman who sold a work visa to his family for Rs 300,000 (about 3,000 dollars). The family borrowed money from relatives to complete this transaction. Having not attended school beyond grade 4, Javed cannot read and write and couldn’t find a job in his home country. The same lack of education and any proper skill set makes him ineligible for regular recruitment abroad as well.

The only option he had was to come to Dubai on whatever salary he could get and gradually build his fortune there. But things did not work out well and he is stuck in a construction sector job that pays a paltry 240 dollars per month. He says it’s hard for him to cover his personal expenses, let alone send anything back home. Meanwhile, he is under immense pressure from his family to pay back the loan that bought his visa. 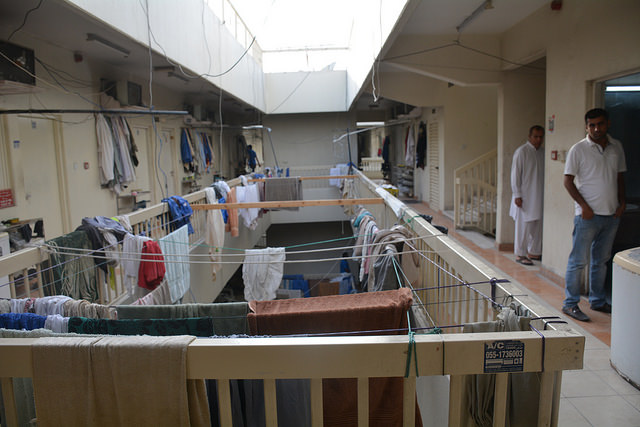 A labour camp in Dubai. Workers are allocated sleeping quarters based on nationality, and the number of occupants may be as high as eight per room. Credit: S. Irfan Ahmed/IPS

Javed is not the only one in this situation. There are thousands of Pakistanis like him who are told fairytales about career growth prospects in UAE but once there, nightmares await them. These workers are mostly unskilled and employed in the construction sector, which is not performing well in the oil-rich countries of the Gulf region. With oil prices down in the global market, the government is facing difficulty clearing payments of construction companies.

“I was inspired by the story of a village fellow who went to Dubai as a mason three decades ago. Now he owns two houses and several acres of land in the village,” Muhammad Iqbal, a migrant worker from Gujranwala district, told IPS. Everybody in the village wants to emulate him regardless of the situation that exists in the Gulf region, he adds.

Pakistan relies heavily on remittances to build on its foreign reserves and they constitute around 6.9 per cent of its Gross Domestic Product (GDP), according to a World Bank report. More than half of the remittances come from two countries – Saudi Arabia and Dubai. There are around 1.3 million Pakistani workers in the UAE and close to 4.3 million in Saudi Arabia.

In the last fiscal year, the country received remittances worth 19.9 billion dollars, but in July they dropped by 20 per cent as compared to the figure of the same month last year. There are speculations that layoffs and non-payment of salaries to migrant workers in this region are the cause of this drop in volume. Some fear there is more to come as a large number of Pakistani workers could face job losses due to the slump in the construction sector where they are mostly employed.

But Ashraf Mehmood Wathra, governor of the State Bank of Pakistan, argues it is a temporary phenomenon and things will improve as these countries are revising their economic policies to offset the impact of the crash in oil prices.

A major problem with Pakistani migrant labour in Gulf region is that it is not diversified and has remained confined to mostly one or two sectors. The Pakistani government has long ignored this aspect and left the shaping of international labour migration trends at the mercy of the private sector. Of late, following the layoffs of around 9,000 Pakistani workers by construction companies in Saudi Arabia, there is a realization that an overwhelming dependence on this sector will not be a safe bet in the future.

Zahid Mahmood, General Manager at Material Lab, a leading material testing company in Dubai, says Pakistani labourers are considered matchless for working in the construction sector. “They can survive in the worst possible working conditions and endure extreme heat,” he told IPS.

He said that Pashtuns from the northwestern part of the country are high in demand for this very reason. But this, he says, has a negative side as well because little has been done to capture share in other sectors. These workers may be employed for as low as 210 dollars per month, although masons, carpenters, fabricators, supervisors, welders and other skilled workers can earn more.

The country will have to devise a proper human resource development strategy to stay in the highly competitive and evolving labour market of the Gulf region, he adds. He is also worried about the low wages paid to Pakistani workers and says there should be official efforts to set a minimum benchmark, for example, 300 dollars per month.

Dilip Ratha, a World Bank economist who recently authored a Migration and Development brief, points out that the Gulf region construction boom funded by oil-based revenue is over and now there is less need for unskilled migrant labour. These economies are also trying to create space to employ their own nationals – something that will further shrink the job market for foreign nationals.

Though there is a lot to be done, the government of Pakistan has announced certain initiatives that it claims will promote safe and decent employment for its migrant workers. These include production of trained, skilled and certified workforce with enhanced employability.

Irfan Qaisar, chairman of the Technical Education & Vocational Training Authority (TEVTA) of the most populous Punjab province, told IPS that they have a developed a Labour Management Information System (LMIS) that maintains the latest information about local and foreign job markets. He says the focus of this government-run institution is on producing demand-based labour and doing away with the unplanned policies of the past.

TEVTA is training people for the hospitality industry, drivers with the help of national Motorway Police and security guards. “Recently, we have announced training of 50,000 security guards on modern lines and with the support country’s law enforcing authorities,” he said. “I am quite hopeful they will be high in demand in international markets once trained on these lines.”

Government efforts notwithstanding, there are calls for active engagement between labour-sending and receiving countries to improve the lives of migrant workers. Expecting desired results without government-to-government level negotiations is asking for too much, especially in monarchies.

Khalid Mahmood, director of the Labour Education Foundation (LEF), a Lahore-based labour rights group, put it this way: “The role of the state becomes important here as migrant workers in Gulf are voiceless. Without the right to associate and demand rights, they are as helpless as one can think of.”