Esther Ngumbi is a post-doctoral researcher at the Department of Entomology and Plant Pathology at Auburn University in Alabama. She serves as a 2015 Clinton Global University (CGI U) Mentor for Agriculture and is a 2015 New Voices Fellow at the Aspen Institute. 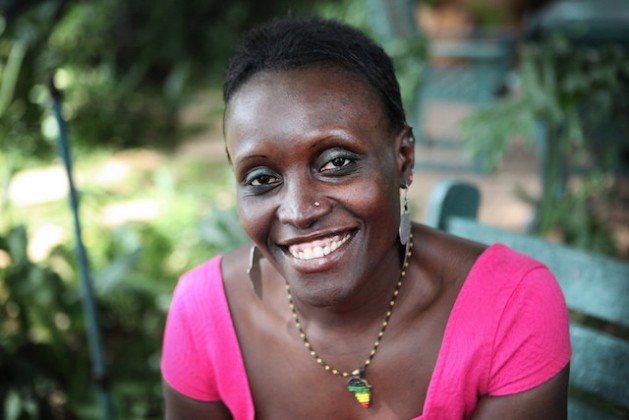 ATLANTA, Georgia, Sep 30 2016 (IPS) - London’s Waterloo Bridge over the River Thames is famously known as the “Ladies Bridge,” for it was built largely by women during the height of World War II.  On another continent, women fighting a different war have built an equally remarkable structure: a 3,300-meter anti-salt dyke constructed by a women’s association in Senegal to reclaim land affected by rising levels of salt water.

These women are on the front-line of the fight against climate change, and their ingenuity and resolve resulted in a singular victory. The project allowed the revitalization of rice-growing activities and the re-generation of natural vegetation over 1,500 hectares, and benefiting over 5,000 people in Senegal.

Women are a minority on every major committee of the United Nations’ own top climate change decision making group.

Yet, women continue to be excluded from climate change solutions for agriculture.  A look at United Nations report on female representations in main climate change decision bodies shows that women are a minority on every major committee of the United Nations’ own top climate change decision making group. For example, women hold only 6 percent of positions in the Advisory Board of the Climate Technology Centre and Network. At the same time, women smallholder farmers have limited access to agricultural training, credit, seeds, and inputs – all of which are essential for the development and adoption of climate-smart agricultural practices.

Most affected by climate change are the world’s 1.3 billion poor people, the majority of whom are subsistence farmers, women and their families. Furthermore, women make up an average of 43 percent of the global agricultural workforce and produce as much as 90 percent of the food supply in African countries, where they are also mainly responsible for providing water and fuel for their families.  All this makes them exceptionally vulnerable to the effects of climate change.

Not only does women’s disempowerment prevent us from understanding the true extent to which climate change is disrupting the way of life for our most at-risk communities, it also perpetuates the antiquated narrative that women are victims, rather than agents, of change.

But, as seen in Senegal, women bring novel perspectives and solutions to the fight against climate change. Furthermore, studies have found that women in leadership improve organizations’ financial performance, strengthen the organizational climate, increase corporate social responsibility and reputation, leverage talent and enhance innovation and collective intelligence.  Therefore, across every level of society, women’s leadership in addressing climate change must be supported.

While there are signs of change—including the recently announced appointment of Patricia Espinosa as Executive Secretary to the United Nations Framework Convention on Climate Change—much remains to be done, whether in the Board room or on the threshing floor.

Small-scale women farmers must beassisted with tools, technologies and other resources to effectively deal with the changing climate. These include portable modern stoves that do not require large amounts of firewood and biogas digesters that can turn waste from animals into gas for cooking.

Water conservation technologies, such as micro-dams, rain storage systems,  and drip irrigation technologies that  grow more crop per drop are a prerequisite for dealing with more variable rainfall. Such climate-smart agriculture techniques could potentially allow small-scale women farmers to grow crops and feed their families throughout the year and avoid the “hungry season.”

When women gain access to such resources and tools on a large scale, whole communities and regions can benefit. In India, for example, the Gorakhpur Environmental Action Group and the Women’s Earth Alliance launched a yearlong India Women, Food Security, and Climate Change Training program.  Through this program, women were trained on a wide array of conservation agricultural practices including agroforestry, conservation tillage and mixed farming. These practices strengthen resilience of the land base to extreme events, broaden sources of livelihoods, and have positive implications for climate change adaptation.

As a result of the initiative, over 5,000 women were trained and over 6,000 trees were grown. The trainees were further tasked with implementing what they had learned. Many of the 5,000 trained women launched their own small-scale agribusinesses and continued to be leaders in the fight against climate change, reaching out to more than 750,000 people.

Another example is the work of late Nobel Prize winner Prof. Wangari Maathai. Through the greenbelt movement, she empowered women to grow seedlings and plant trees to bind the soil, store rainwater, and provide food and firewood. Since its inception, the organization has planted over 51 million trees, helping to protect Kenya’s forests. This program not only addresses climate change, but it also creates jobs for women while improving water and food security.

Efforts towards empowering women with tools and resources to fight climate change must be intensified and accelerated at local, national and regional levels.  Echoing the words of former President of Finland Tarja Halonen: “Women are powerful agents whose knowledge skills and innovative ideas support the efforts to combat climate change.” Including women in top decision-making organs on issues of climate change and empowering them on ground to take action is essential, and will surely facilitate a more stable and prosperous planet.