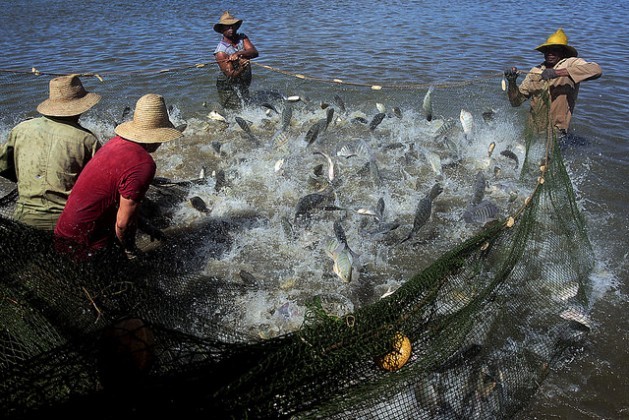 Tilapia jump as they are caught on the La Juventud fish farm in the Los Palacios municipality in the western province of Pinar de Rio, Cuba. Credit: Jorge Luis Baños/IPS

LOS PALACIOS, Cuba, Oct 26 2016 (IPS) - Protected from the sun by broad-brimmed hats and long- sleeved shirts, workers at the La Juventud fish farm throw fish feed into the tanks for the tilapias, a fish that is scarce and in high demand in the Cuban markets.

“Production grew significantly due to a combination of factors: sex reversal (use of hormones to produce a 98 per cent male population), better quality fish feed, and introduction of genetically improved species,” Guillermo Rodríguez, the director of the fish farm, told IPS.

La Juventud, located in the municipality of Los Palacios and known as the best producer of tilapia – highly valued for its flavour – in Cuba, belongs to the state-owned Pinar del Río Fish Farming Company (Pescario), which groups all the activity in the sector in this western province.

Thanks to a restructuring of the fish farming industry, focusing on technological upgrading, this Caribbean island nation produced last year 27,549 tons of freshwater fish in tanks, pools and reservoirs, the largest volume since aquaculture was introduced in the 1980s.

The fish and seafood catch, which in 2015 totalled 57,657 tons, only covers a small proportion of the demand from the population of 11.2 people, and does not fully meet the demand from the thriving tourism industry, which this year is expected to break the record of three million visitors from abroad.

Including fish and seafood products, the country spends some two billion dollars a year on food imports, despite a slight increase in domestic food production, achieved as a result of the economic reforms implemented since 2008.

The rise in aquaculture production was due to a reorganisation of the industry, stability in the fish feed supply, wage hikes, intensive fish farming and the genetic improvement of species, with state funds, international development aid and foreign investment.

“In 2015, our company produced 465 tons of fish, including 200 tons of tilapia. And so far this year we have harvested 391 tons, including 248 of tilapia,” Rodríguez said, referring to the output of the La Juventud fish farm, which employs 132 workers, 17 of whom are women. 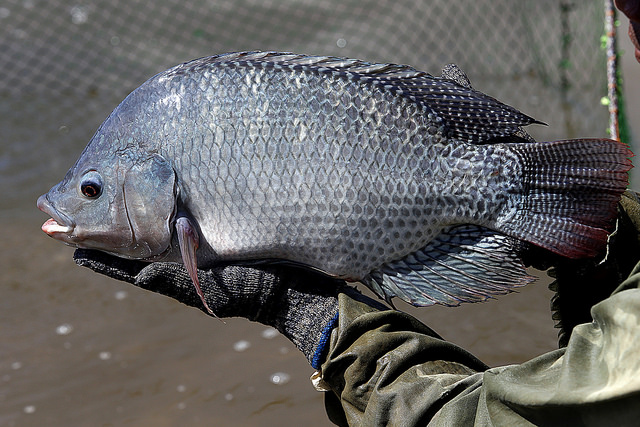 In their installations, using 46.2 hectares of water that flows by gravity from a nearby dam, La Juventud raises fry that it receives every two years from the state Aquaculture Technology Development Company (EDTA), releases the fish in reservoirs, and harvests them later to send them to plants to be processed.

Yields took off in 2011 when the sex reversal technique and the first genetically improved species were introduced, as part of a project of technology transfer from Vietnam. As of 2015 they receive support from the United Nations Food and Agriculture Organisation (FAO).

He said the average monthly wage climbed from 13 dollars to more than 58 dollars, which is more than twice the average wage of 23 dollars earned by state employees.

The two-year programme called “Adoption and implementation of a freshwater fish genetic improvement programme”, signed last year between the government and FAO, has a budget of 297,000 dollars for strengthening the skills of producers and technical and scientific personnel across the country in genetics and breeding.

“The project’s activities mainly involve the Aquaculture Technology Development Company, with training and inputs to raise the fry,” said Loliette Fernández, a FAO officer in Cuba.

“The goal is to create a national programme of genetic improvement of freshwater fish, which today does not exist,” she told IPS.

The initiative, which has drawn international consultants to the country, focuses on tilapia farming, particularly with the introduction of the GIFT (Genetically Improved Farmed Tilapia) variety, which is also used in fish farming in other developing countries.

“Tilapia has always been part of the Cuban diet, but with GIFT we’re selling a high-quality attractive fish. Our industry produces a variety of products, but tilapia is the most popular,” veterinarian Mercedes Domínguez, who works on the farm, told IPS. 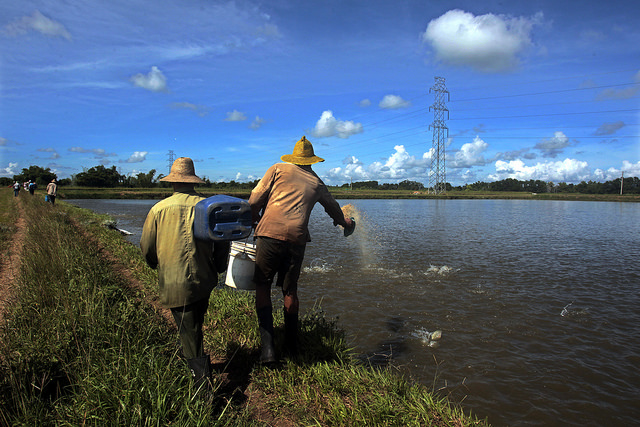 From the edge of the tank, workers feed tilapia on the La Juventud fish farm, the best-known in Cuba for its production of this fish, which is highly valued by both the local population and tourists. Credit: Jorge Luis Baños/IPS

Snowy egrets fly over the La Juventud facilities and walk along the rims of the big tanks, pools and channels. The buildings are nicely painted and have handmade posters explaining the processes carried out in each area.

“We maintain the fish farming installations with the smallest possible repairs that we can afford to make, but they all need large and specialised engineering works to make better use of the water,” said the head of Pescario, Jorge Triana, pointing to the walls of the tanks on the farm, which have been in use for over two decades.

Besides the lack of repairs and necessary upgrading, Triana also mentioned other difficulties faced by the company, which supplies fish to the province of 140,252 people.

La Juventud’s fleet of vehicles is aging, there are problems of refrigeration, and the technology is obsolete.

He estimates that what Pescario produces covers about 30 per cent of the province’s demand. “Although it depends on whether the stores offer other meat products, our fish arrive in the morning, and by the afternoon there is nothing left,” he told IPS.

“The company has achieved a steady capture of over 1,700 tons, which is more than before,” he said. Of that total, just 32 tons come from private fishers who fish in Cuban waters and sell their catch to the state company.

He said that now they are working on making adjustments to the whole system to achieve their growth goals by 2030.

“The future of Cuba and the entire world lies in aquaculture,” said Margarita Cepero, who since 2006 has headed a fish fattening unit with floating cages in the Sidra reservoir, in the western province of Matanzas.

“Every year there are more restrictions on sea fishing, in order to protect species,” she told IPS.

Cuba over-fished its 50,000 square kilometers of waters in the Caribbean, which are not highly productive, in the 1960s, 1970s and 1980s. The island is facing the consequences of international depletion of fish resources and the overexploitation of its own coasts.