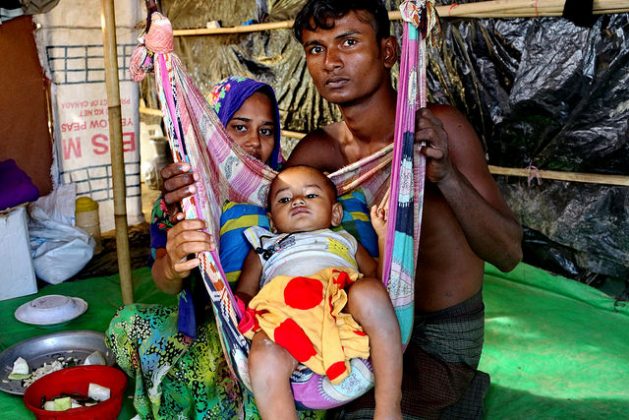 A Rohingya couple, Mohammad Faisal and his wife Hajera, pose for a photo with their child at their camp at Teknaf Nature's Park, Bangladesh. Credit: Farid Ahmed/IPS

Dec 18 2017 (IPS) - On Nov. 23, the governments of Myanmar and Bangladesh signed an agreement to return the Rohingya refugees — more than 600,000 people who escaped from Rakhine state in western Myanmar to Cox’s Bazar in Bangladesh — after ethnic cleansing carried out by Myanmar’s armed forces since August.

Bangladesh is expected to compile lists of refugees wanting to return on a voluntary basis. Myanmar intends to verify each application to establish whether a refugee is eligible for repatriation. The returnees must provide copies of identity cards and documents certifying the address of their residence in Myanmar.

It might create the illusion of a policy decision by two governments moving toward addressing a shared refugee crisis. But the agreement is a hollow political gesture.

Myanmar’s minister for resettlement, Win Myat Aye, has said that his country would be taking back no more than 300 refugees per day. At that rate, it would take over five and a half years for all the 600,000 Rohingyas to be allowed back in.
Most of the Rohingyas who fled for Bangladesh left under dire circumstances — their villages set on fire, their lives in peril. They made desperate runs with their children and elderly. How many would have had the luxury of time and safety to look for their documents before the exodus?

The agreement between Bangladesh and Myanmar specifies that the refugees should be returned to their homes and property. It is highly improbable, because numerous Rohingya villages have been burned and their cattle and lands seized by their Buddhist neighbors.

And last week, Myanmar announced that it would be building camps for some of the returnees. It is unclear whether it is a serious policy proposal or yet another talking point. No details about the capacity of the proposed camps are available. What is known is this: Myanmar’s minister for resettlement, Win Myat Aye, has said that his country would be taking back no more than 300 refugees per day. At that rate, it would take over five and a half years for all the 600,000 Rohingyas to be allowed back in.

The other issue is that the resettlement has to be voluntary. Why would a Rohingya prefer moving from a refugee camp in a relatively safe country to a refugee camp in an intensely hostile country and depend upon safety from the very people who killed their families and burned their villages?

Several Rohingya refugees I met in the camps in Bangladesh did tell me that if they were granted citizenship and equal rights, they would return to Myanmar. But that seems improbable because of Myanmar’s long history of systematically depriving the Rohingyas of their legal and basic human rights.

The government of Myanmar has given no assurances about the legal status of the returnees nor spoken about guaranteeing their safety. They might simply end up being described as “immigrants from Bangladesh,” a phrase their persecutors all along used to describe them.

A recent statement from Senior Gen. Min Aung Hlaing, Myanmar’s military chief, about the proposed repatriation process has renewed fears about the safety of potential returnees. “The situation must be acceptable for both local Rakhine ethnic people and Bengalis, and emphasis must be placed on (the) wish of local Rakhine ethnic people who are real Myanmar citizens,” he said.

All of this raises severe doubts about the agreement between Bangladesh and Myanmar. Several Bangladeshi leaders I met in Dhaka after the agreement was signed seemed keen to send the Rohingyas without having given much thought to how they would achieve it. They regard the Rohingyas as a financial burden on their impoverished country and a potential security threat.

Bangladesh has tried to keep the Rohingya refugees in camps isolated from the rest of society to signal that they are not meant to live there for good. Bangladeshi politicians signed the agreement because from their point of view, any deal that might move some Rohingyas back across the border is a good deal.

The Rohingyas know it. And that is why there is not much in the way of a line to fill in resettlement forms around Cox’s Bazar. Staying in Cox’s Bazar is the best option for the Rohingyas at the moment. Bangladesh must let them stay and not try to push them back over the border into the hands of their persecutors.

Azeem Ibrahim, a senior fellow at the Center for Global Policy, is the author of “The Rohingyas: Inside Myanmar’s Hidden Genocide.”

Encouraged by the author who is relentless in his efforts to draw international attention to highlight the hopeless state of the Rohingya, IPS is republishing his oped from The New York Times of Dec 6, 2017.