Tianyi Luo is a senior manager with the Aqueduct Project at the Global Water Program at World Resources Institute.

WASHINGTON DC, May 11 2018 (IPS) - Most power generation consumes water, whether to cool steam in thermoelectric plants or power turbines for hydropower. And the global demand for both water and electricity will continue to increase substantially in the coming decades.

Although growth is generally a good thing for the economy, it challenges nations—particularly ones that are water-stressed—to better manage their limited water resources and invest in the right energy systems.

Power generation from solar photovoltaic (PV) and wind is clean and requires zero or little water use. These renewable forms of energy can help countries meet their increased demand for electricity without adding carbon emissions or consuming water.

This could be particularly beneficial in countries where growing populations, farms and industries are already competing for scant water supplies. For example, a recent WRI analysis shows that India could reduce its water consumption intensity by more than 25 percent just by achieving its renewable energy targets.

Leveraging WRI’s Resource Watch, a new global data platform, we overlaid map-based data sets to identify countries that are water-stressed and have high solar and wind energy potential. These countries are places where solar PV and wind technologies are more likely to be financially attractive and provide water savings that would benefit the public greatly.

The top 20 water-stressed countries with the most average solar energy potential are in the Middle East and North African region; the rest are from Asia and Pacific, Latin America and Sub-Saharan Africa.

The list includes countries at all economic stages: three are developed (Australia, Israel and Saudi Arabia), four are some of the least developed (Afghanistan, Eritrea, Timor-Leste and Yemen), and the rest are from emerging or developing markets.

Yemen has the highest average solar energy potential in terms of global horizontal irradiance (GHI), a proxy of the strength and concentration of solar energy hitting a PV panel. It’s also one of the world’s most water-stressed and least developed countries.

The World Bank just invested $50 million in solar PV projects to restore electricity to more than one million Yemenis. However, with the ongoing civil war in the country, renewables development could still be challenging.

Eritrea and Saudi Arabia have the second- and third-highest average solar energy potential, but very different economic power. It is more challenging for countries with constrained financial resources to adopt renewable technologies at a large scale.

However, as the cost for solar and wind energy continues to decline, these options are becoming more attractive. Even oil-rich countries like Saudi Arabia are investing heavily in solar energy for domestic consumption, with a target of 9.5 gigawatts (GW) of solar and wind by 2023.

Of the 20 water-stressed countries with the most wind energy potential, eight are from the Middle East and North Africa (MENA), six from Europe, and the rest from Asia Pacific and North America. Eight of the countries are developed, 11 are from emerging and developing markets, and one is among the world’s least developed.

Andorra has the highest wind energy potential, followed by Belgium and Kazakhstan. However, for wind to be attractive in Andorra, the costs would need to be cheaper than its current electricity imports from Spain.

Seven water-stressed countries (Algeria, Bahrain, Kuwait, Morocco, Oman, Qatar and Yemen) in the MENA region have high average energy potentials for both solar and wind, as well as Australia. Some of these countries have plans to harness solar and wind energy, but many do not, and many goals fall short of their potential. Also, because of their oil wealth, some of these countries rely on desalination for water supply and might not have a water scarcity problem for now.

A full list of all countries with high water stress and their average wind energy potentials can be found at the bottom of this post.

Note: For countries that span large areas, there could be spatial mismatch between water stress and renewable potential and electricity demands, which is not accounted for in this analysis. Additionally, more comprehensive analysis would require looking at local governance, regulations, availability and cost of competing energy resources and economics. While local contexts may differ, these aggregate averages show which countries have the most to gain from renewables’ water savings overall. More granular data could be found and visualized on Resource Watch. 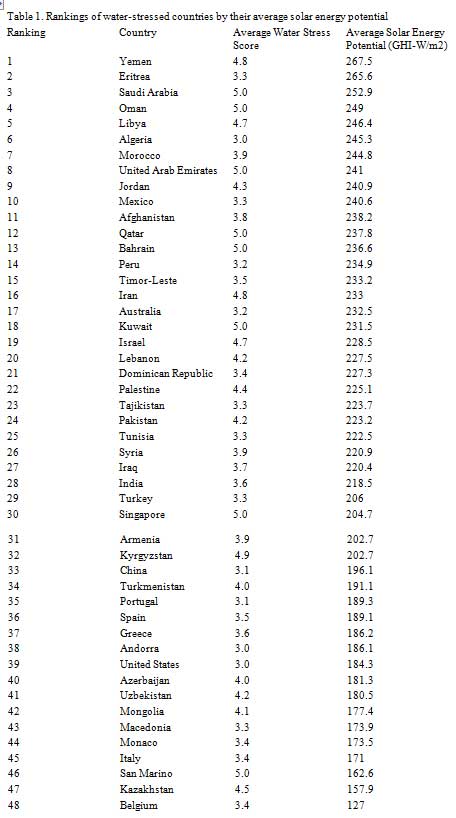 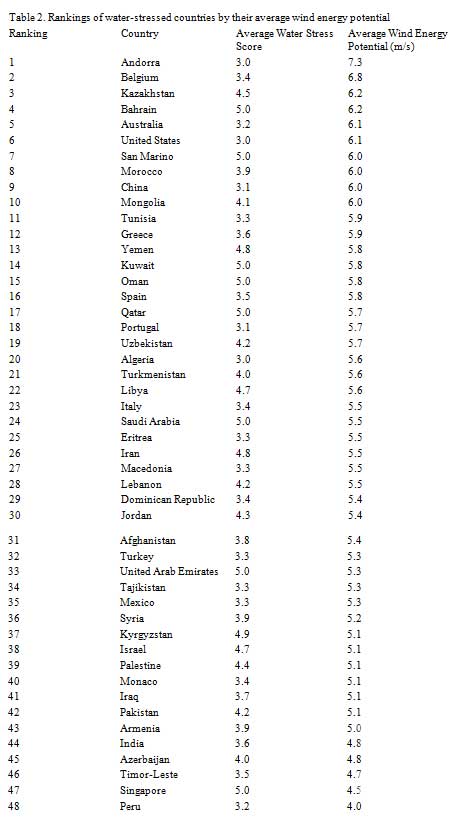