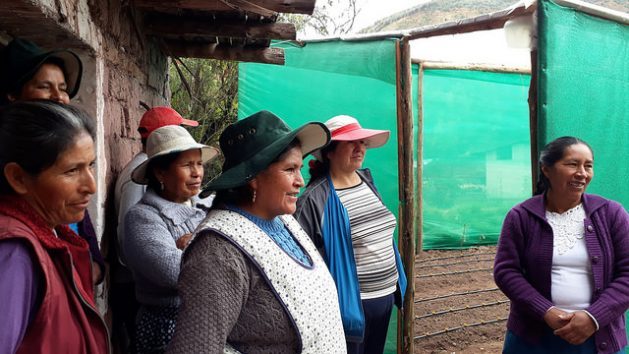 In the community of Paropucjio, several women stand next to the solar greenhouse they have just built together on the plot of land belonging to one of them, in the district of Cusipata, more than 3,300 metres above sea level in the Cuzco highlands region in Peru. They get excited when they talk about how the greenhouses will improve their families' lives. Credit: Mariela Jara/IPS

CUSIPATA, Peru, Jun 30 2018 (IPS) - At more than 3,300 m above sea level, in the department of Cuzco, women are beating infertile soil and frost to grow organic food and revive community work practices that date back to the days of the Inca empire in Peru such as the “ayni” and “minka”.

“We grow maize, beans and potatoes, that’s what we eat, and we forget about other vegetables, but now we’re going to be able to naturally grow tomatoes, lettuce, and peas,” María Magdalena Condori told IPS, visibly pleased with the results, while showing her solar greenhouse, built recently in several days of community work.

She lives in the Andes highlands village of Paropucjio, located at more than 3,300 m above sea level, in Cusipata, a small district of less than 5,000 inhabitants.

"We want to help improve the quality of life of rural women by strengthening their capacities in agriculture. They work the land, they sow and harvest, they take care of their families, they are the mainstay of food security in their homes and their rights are not recognized." -- Elena Villanueva

The local population subsists on small-scale farming and animal husbandry, which is mainly done by women, while most of the men find paid work in districts in the area or even in the faraway city of Cuzco, to complete the family income.

The geographical location of Paropucjio is a factor in the low fertility of the soils, in addition to the cold, with temperatures that drop below freezing. “Here, frost can destroy all our crops overnight and we end up with no food to eat,” says Celia Mamani, one of Condori’s neighbors.

A similar or even worse situation can be found in the other 11 villages that make up Cusipata, most of which are at a higher altitude and are more isolated than Paropucjio, which is near the main population centre in Cusipata and has the largest number of families, about 120.

Climate change has exacerbated the harsh conditions facing women and their families in these rural areas, especially those who are furthest away from the towns, because they have fewer skills training opportunities to face the new challenges and have traditionally been neglected by public policy-makers.

“In Paropucjio there are 14 of us women who are going to have our own greenhouse and drip irrigation module; so far we have built five. This makes us very happy, we are proud of our work because we will be able to make better use of our land,” said Rosa Ysabel Mamani the day that IPS spent visiting the community.

The solar greenhouses will enable each of the beneficiaries to grow organic vegetables for their families and to sell the surplus production in the markets of Cusipata and nearby districts. 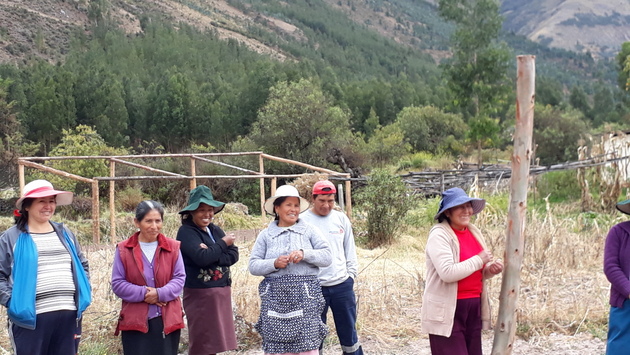 Women farmers from Paropucjio, in the district of Cusipata, more than 3,300 metres above sea level, smile as they talk about the wooden structure for a solar greenhouse, which they jokingly refer to as a “skeleton”. The roof will be made of a special microfilm resistant to bad weather, intense ultraviolet radiation and extreme temperatures, and the greenhouses are built collectively, in the Andean region of Cuzco, Peru. Credit: Mariela Jara/IPS

With a broad smile, Mamani points to a 50-sq-m wooden structure that within the next few days will be covered with mesh on the sides and microfilm – a plastic resistant to extreme temperatures and hail – on the roof.

“We will all come with our husbands and children and we will finish building the greenhouse in ‘ayni’ (a Quechua word that means cooperation and solidarity), as our ancestors used to work,” she explains.

The ayni is one of the social forms of work of the Incas still preserved in Peru’s Andes highlands, where the community comes together to build homes, plant, harvest or perform other tasks. At the end of the task, in return, a hearty meal is shared.

The minga, another legacy of the Inca period, is similar but between communities, whose inhabitants go to help those of another community. In this case women from different villages and hamlets get together to build the greenhouses, especially the roofs, the hardest part of the job.

Training in production and rights

A total of 80 women from six rural highlands districts in Cuzco will benefit from the solar greenhouses and drip irrigation modules for their family organic gardens, as part of a project run by the non-governmental Peruvian Flora Tristán Women’s Centre with the support of the Spanish Basque Agency for Development Cooperation. 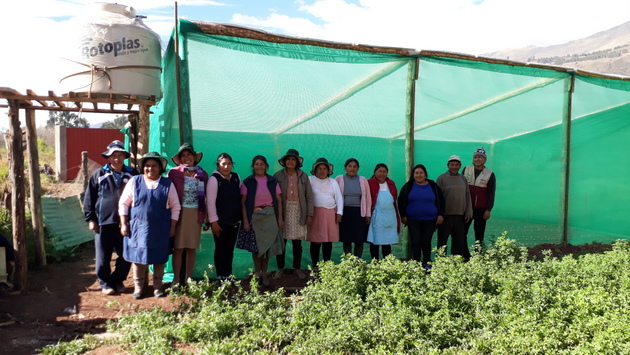 Women farmers from the community of Huasao, in the Andean highlands region of Cuzco, Peru, stand in front of one of the 50-sq-m solar tents, which has a 750-litre water tank for the drip irrigation module for their vegetables. Credit: Mariela Jara/IPS

“We want to help improve the quality of life of rural women by strengthening their capacities in agriculture. They work the land, they sow and harvest, they take care of their families, they are the mainstay of food security in their homes and their rights are not recognised,” Elena Villanueva, a sociologist with the centre’s rural development programme, told IPS.

She said the aim was comprehensive training for women farmers, so that they can use agro-ecological techniques for the sustainable use of soil, water and seeds. They will also learn to defend their rights as women, farmers and citizens, in their homes, community spaces and before local authorities.

The expert said the solar greenhouses open up new opportunities for women because they protect crops from adverse weather and from the high levels of ultraviolet radiation in the area, allowing the women to grow crops that could not survive out in the open.

“Now they will have year-round food that is not currently part of their diet, such as cucumbers, peppers, tomatoes and lettuce, that will enrich the nutrition and diets in their families – crops they will be able to plant and harvest with greater security,” she said.

The women have also been trained in the preparation of natural fertilisers and pesticides. “Our soils don’t yield much, they squeeze the roots of the plants, so we have to prepare them very well so that they can receive the seeds and then provide good harvests,” Condori explains.

In the 50 square metres covered by her new greenhouse, the local residents have worked steadily digging the soil to remove the stones, turn the soil and form the seed beds for planting. 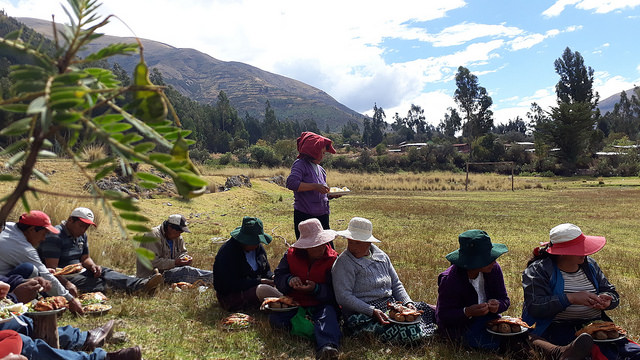 Women and men from the community of Paropucjio, in Peru’s Andes highlands region of Cuzco, share lunch after completing the community work of building one of 80 small greenhouses, where women farmers will be able to grow organic vegetables despite the extreme temperatures in the area. Credit: Mariela Jara/IPS

“To do that we have had to fertilise a lot using bocashi (fermented organic fertiliser) that we prepare in groups with the other women, working together in ayni. We brought guinea pig and chicken droppings and cattle manure, leaves, and ground eggshells,” she explains.

This active role in making decisions about the use of their productive resources has helped change the way their husbands see them and has brought a new appreciation for everything they do to support the household and their families.

Honorato Ninantay, from the community of Huasao, located more than 3,100 metres above sea level in the neighbouring district of Oropesa, confesses his surprise and admiration for the way his wife juggles all her responsibilities.

“It seems unbelievable that before, in all this time, I hadn’t noticed. Only when she has gone to the workshops and has been away from home for two days have I understood,” he says.

“I as a man have only one job, I work in construction. But my wife has aahh! (long exclamation). When she left I had to fetch the water, cook the meals, feed the animals, go to the farm and take care of my mother who is sick and lives with us. I couldn’t handle it all,” he adds.

His wife, Josefina Corihuamán, listens to her husband with a smile on her face, and confirms that he is now involved in household chores because he has understood that washing, cleaning and cooking are not just a “woman’s job.”

She also has a solar greenhouse and irrigation module and is confident that she will produce enough to feed her family and sell the surplus in the local market.

“What we will harvest will be healthy, organic, chemical-free food, and that is good for our families, for our children. I feel that I will finally make good use of my land,” she says.