Kingsley Ighobor is a writer at Africa Renewal,* published by the United Nations

Attendees at an FAO sub-regional training workshop on gender and livestock in Harare, Zimbabwe.

UNITED NATIONS, Apr 22 2019 (IPS) - Government staffer Souhayata Haidara enjoys talking about her life in a patriarchal society. Her career is a triumph of patience and perseverance, she tells Africa Renewal with a smile and a wink.

Ms. Haidara, currently the Special Adviser to Mali’s Minister of Environment and Sustainable Development, says she was lucky not to be married off at age 14 like some of her peers. Her father resisted pressure from suitors and relatives and insisted that the teenager be allowed to complete high school before getting married.

“In our culture, people believe education is for boys and that the women must marry and stay at home,” she says.

Women’s economic empowerment is anchored by education, maintains Ms. Haidara, who earned a degree in environmental science in the US on a scholarship from the United States Agency for International Development.

“I couldn’t be where I am today without education. I earn an income. I educated my three children—a boy and two girls, now grown. I have a six-year-old granddaughter who is getting the best grades in class. That makes me very happy.”

But Brandilyn Yadeta, a 32-year-old Ethiopian, missed out on education. “I had a baby at 19 and the father traveled abroad without letting me know. Since then, I continue to struggle to take care of my child, which is my priority, above my education.” She is a small-scale trader. 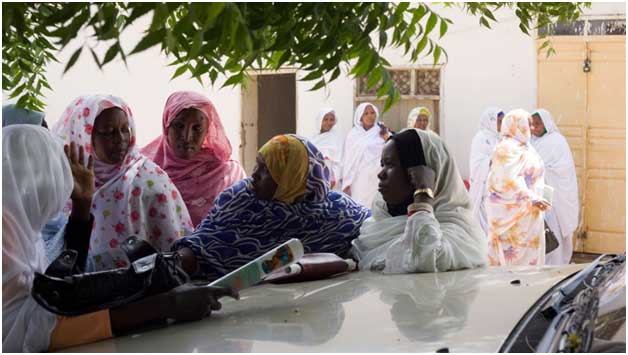 If the father refuses to pay child support for his child, what options does a woman have? “What can I do?” Ms. Yadeta asks with frustration and regret.

Ms. Yadeta and others like her in Africa are unsung heroes—taking care of the family, a job mostly unrecognized by their society. Yet in monetary terms, women’s unpaid work accounts for between 10% and 39% of GDP, according to the UN Research Institute for Social Development, which provides policy analysis on development issues.

The International Labour Organisation (ILO) states that women are disproportionately laden with the responsibility for unpaid care and domestic work. It highlights this issue to make the case for economic empowerment of women, which is now a front-burner topic in development literature.

A World Bank report titled Women, Business and the Law 2019: A Decade of Reform states that sub-Saharan Africa “had the most reforms promoting gender equality [of any region].” In fact, six of the top 10 reforming countries are there—the Democratic Republic of the Congo, Guinea, Malawi, Mauritius, São Tomé and Príncipe, and Zambia.

Despite a protracted political crisis, the DRC made the most improvement based in part on “reforms allowing women to register businesses, open bank accounts, sign contracts, get jobs and choose where to live in the same way as men,” states the report.

Mauritius introduced civil remedies for sexual harassment at work and prohibited discrimination in access to credit based on gender. Among the civil remedies, employers are prohibited from sexually harassing an employee or a job seeker while an employee must not sexually harass a fellow employee. Mauritius also mandated equal pay between men and women for work of equal value.

is the amount that sub-Saharan Africa loses yearly because of the gender gap in the labour market. São Tomé and Príncipe equalized mandatory retirement ages and the ages at which men and women can receive full pension benefits—a move that increased the country’s female labour force participation by 1.75%.

The World Bank’s report by no means suggests that all is well with women in these countries. The report merely highlights the positive incremental changes that these countries are making.

The DRC, for example, may have implemented some pro–women’s empowerment reforms, but women in that country still have no land or inheritance rights, according to the Global Fund for Women, a nonprofit.

Theodosia Muhulo Nshala, Executive Director of the Women’s Legal Aid Centre, a nonprofit in Tanzania, tells Africa Renewal that “men and women [in Tanzania] have equal rights to land ownership, thanks to the Village Land Act of 1999; however, customary laws exist that prevent women and girls from inheriting land from their husbands and fathers.”

While women’s participation in the labour force (mostly in the informal sector) is high in many sub-Saharan Africa countries—86% in Rwanda, 77% in Ethiopia and 70% in Tanzania—only in eight countries (Gabon, Ghana, Kenya, Libya, Namibia, South Africa, Uganda and Zimbabwe) do more than 50% of women own bank accounts, according to the Global Financial Inclusion Database, which regularly publishes country-level indicators of financial inclusion.

Not a zero-sum game

Economically empowering women is not a zero-sum game in which women win and men lose, notes Urban Institute, a policy think tank in Washington, D.C. Rather, Mckinsey Global Institute, a US-based management consulting firm, forecasts that, “A ‘best in region’ scenario in which all countries match the rate of improvement of the fastest-improving country in their region could add as much as $12 trillion, or 11 percent, in annual 2025 GDP.”

On the flip side, since 2010 sub-Saharan African economies have lost about $95 billion yearly because of the gender gap in the labour market, says Ahunna Eziakonwa, Director of UNDP’s Regional Bureau for Africa (see interview on page 22). “So imagine if you unleash the power, talent and resolve of women.”

Experts believe that women’s economic empowerment is the key to achieving the African Union’s Agenda 2063, a continental framework for socioeconomic transformation of the continent, and several goals in the UN’s 2030 Agenda for Sustainable Development.

Aspiration 6 of Agenda 2063 envisages an “Africa whose development is people driven, relying on the potential offered by people, especially its women and youth, and caring for children.”

What can countries do to empower women economically?

In a blog for the World Bank, Cape Verde’s Minister of Finance, Planning and Public Administration Cristina Duarte and the World Bank’s Vice President for Infrastructure Makhtar Diop recently encouraged “support [for] young women during adolescence—a critical juncture in their lives.”

The Empowerment and Livelihood for Adolescents programme in Uganda, which “uses girl-only clubs to deliver vocational and ‘life skills’ training,” is a good example, according to Ms. Duarte and Mr. Diop.

The World Bank recommends, among other actions, the passage of laws that foster financial inclusion. Ms. Eziakonwa believes that countries must expunge laws that are obstacles in women’s way, including those that prohibit them from owning land.

South African journalist Lebo Matshego is urging women’s rights activists to use social media to lobby against those customs and traditions that infringe on the rights of women.

Vera Songwe, head of the Economic Commission for Africa, the first woman to lead the organization, says women, especially in rural areas, need access to the internet to be able to take advantage of new technologies.

According to Ellen Johnson Sirleaf, a former president of Liberia, affirmative action is the way to go. She says that “now is the time for preferential treatment of women,” such as quotas on jobs and access to credit.

UN Women supported a review of Kenyan public procurement in 2013, and Kenya now reserves a minimum of 30% of annual government spending for women. In 2017, through its Women’s Economic Empowerment programme,

UN Women reported successfully training 1,500 women vendors in Nairobi to participate and benefit from the government supply chain. This is one example of an action in line with Ms. Sirleaf’s suggestion.

The quality of jobs that women do also matters, writes Abigail Hunt, a researcher with the Overseas Development Institute, a UK-based think tank. “Empowerment is limited when women enter the labour market on unfavourable terms.

This includes women’s engagement in exploitative, dangerous or stigmatized work, with low pay and job insecurity.” In other words, women need access to high-paying, safe and secure jobs.

“The road to women’s economic empowerment is irreversible,” maintains Ms. Sirleaf. “It’s taking a while to get it, but it’s coming; no one can stop it.”