Sharing the Burden of Refugees; the World Can Do Better 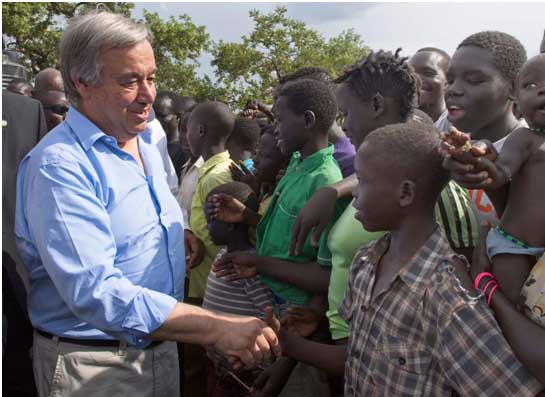 NAIROBI, Kenya, Jun 20 2019 (IPS) - As the world marks World Refugee Day on June 20th to celebrate the strength, courage and perseverance of refugees, a glaring concern remains just how inadequate the global response to the refugee crisis has been.

To a large extent, refugees have been painted with the broad strokes of a burden to host economies or sources of insecurity and crime. The world has lacked the resolve and skills needed to negotiate peace settlements, end the refugee crisis through dialogue and diplomacy and support countries that continue to host refugees.

According to the United Nations High Commissioner for Refugees (UNHCR), the world is facing the highest levels of displacement ever in history, with over 65 million people forced from their homes by war, internal conflicts, drought or poor economies. People are forcibly displaced at a rate of 34,000 per day due to conflict or persecution.

The world’s poorer countries are bearing the brunt. Currently, eight out of ten refugees are hosted by developing countries, mostly in Africa, adding to existing challenges such as access to food, water, shelter and health care to both refugees and host communities.

Extensive media coverage of the surge in refugees landing in Europe has tended to divert attention from the challenges that a few African countries are grappling with as they carry the burden of displacement. Ethiopia, Uganda and Kenya are among the countries in Africa that continue to extend their hospitality and bare the social and economic burden.

Ethiopia hosts nearly 740,000 refugees, mostly from Somalia, Eritrea, Sudan and South Sudan, the largest refugee population in a single African country. The country maintains an open-door policy that welcomes refugees and allows humanitarian access and protection. In Uganda, the more than 500,000 refugees from Burundi, Democratic Republic of Congo and South Sudan, have been granted free movement, employment opportunities and land for building new homes or farming.

Kenya currently hosts about 480,,000 refugees. Most are Somali refugees, but others are from South Sudan, Ethiopia, Democratic Republic of Congo, the Great Lakes region, and others. They are concentrated in three main locations: the Dadaab camps, the Kakuma camp, and urban areas.

In Kakuma, the Government of Kenya and various UN agencies led by UNHCR together with the World Bank (IFC) are implementing the Kalobeyei Integrated Socio-economic Development Programme that is enhancing inclusion by empowering the refugees and host communities to participate in socio-economic activities.

The programme has created conditions that are attracting investment from the private sector and impressive gains are already evident in a more vibrant local economy. The International Finance Corporation estimates that there are over 2,500 refugee businesses in Kakuma and Kalobeyei, with economic activities being worth about $56 million per year

Such data supports the need to begin to see refugees not just as a problem to be overcome. Various studies have concluded that refugees have a net positive effect on the welfare of locals. The World Bank, “Yes, in my backyard” established that refugee presence in Kakuma contributes 3% to the GDP in Turkana West.

As UN Secretary-General Antonio Guterres has observed, “inclusion and social cohesion are the tools with which it is possible to allow refugees and host communities to live together in harmony and create a win-win situation for everyone”.

The world must take collective responsibility for the horrors of rampant conflict, violence and human rights abuses that continue to force people to flee within or outside their countries. Currently, about two-thirds of all the refugees under the UNHCR’s mandate come from just five countries: Syria, Afghanistan, South Sudan, Myanmar and Somalia.

As the world observes World Refugee Day this year, UNHCR has received contributions of only $306 million for its programmes in Africa, which represents a paltry 11 percent of its requirements.

With a keener sense of purpose and will, the world can take better care of refugees, a segment of society that represents humanity at its most vulnerable.

It is the only way to prove that the oft-repeated declaration about all humans being born equal is more than just parody.

The original version of this article appeared in Thomson Reuters Foundation news.